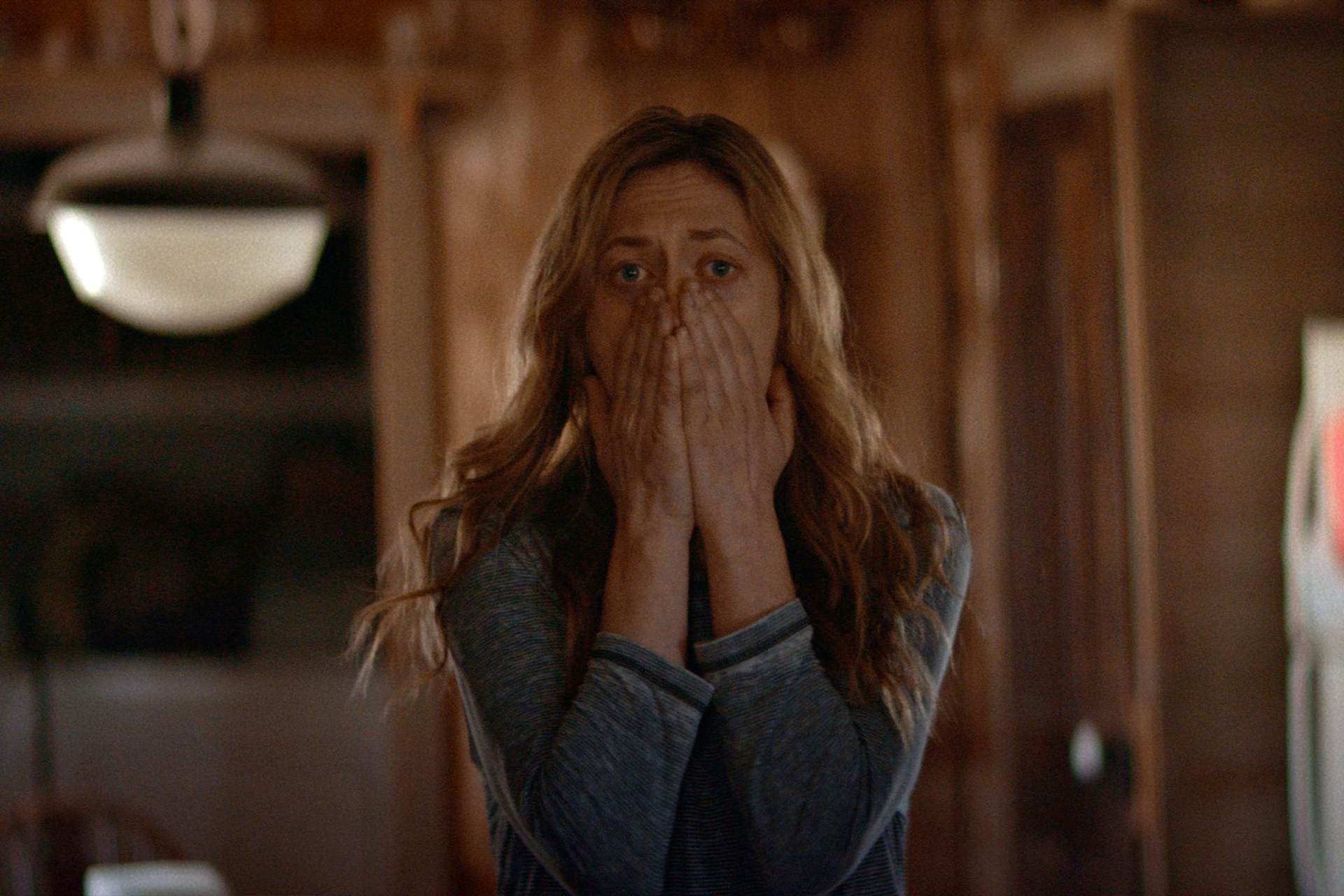 No matter how staunch your atheism, there still exists a surefire way to get you believing in God. It’s not hearing His voice or seeing His work, though. Those can easily be laughed away or chalked up to coincidence. God is an abstract catchall in which His faithful are conditioned to place their faith. They rely on Him as their savior while atheists rely on themselves. His deeds are inconsequential to those recognizing how “good” can always be explained by their own actions first. It’s therefore only when darkness creeps in that we question the validity of our behavior since reason no longer applies. Grace makes us smile. Miracles give us time. God lets us create. It’s destruction that conversely gives pause because loss has no concrete answers.

How then does a life-long atheist like Louise (Marin Ireland) and Michael’s (Michael Abbott Jr.) mother (Julie Oliver-Touchstone) become a believer in God? She hears the voice of the Devil. She witnesses evil incarnate and accepts her inability to combat its seemingly inevitable goal. And if she cannot stop it from terrifying her with whispers about how it is going to take the soul of her dying husband (Michael Zagst) to Hell, what besides God can? Only when they can no longer act on their own behalf do the faithless turn to Him for help. Maybe she prays. Maybe she collects crucifixes as a means of protection. Maybe He’ll even answer her with a hopeful word about love being more powerful than anything that could ever threaten them.

It’s this hope that writer/director Bryan Bertino provides his grieving family when it seems as though none exists. It’s this glimmer of light that becomes the only thing they can hold onto in a film that most certainly lives up to its title, The Dark and the Wicked. The question we must ask ourselves then is whether or not it will be enough to save their father or themselves. Will God somehow intervene? Will Louise and Michael—themselves lifelong atheists in the image of their mother—consider He’s in a position to do so? As soon as the nightmare surrounding their parents’ farm exacerbates to the point where the Devil becomes their only acceptable answer for what occurs, they find that they have no other choice.

That the Devil is already there when Louise and Michael arrive against their mother’s wishes is never up for debate. With an opening prologue presenting his presence through sounds that aren’t possible without another person being awake and their mother’s calm turn to confront it off-screen without the tiniest bit of surprise, Bertino reveals his motives aren’t concerned with wonder. He’s not presenting unexplainable horrors for his characters or us to hypothesis about. They’re the work of the Devil and He is biding his time before taking what he’s declared as his property. Does it matter that the victim is a good man? No. If anything that’s all the more reason to claim him because it means he was loved by others willing to enter the lion’s den.

The farm is thus overrun by pain, sorrow, guilt, and regret. Lynn Andrews’ nurse relays that love can be a weapon for the living against such things, but it can also be wielded as weapon by that which isn’t. The more helpless you feel, the less desire you have to keep going. The more willing you are to sacrifice yourself for a loved one, the greater chance that their untimely demise can destroy you before the opportunity arises. And if you’re unable to discern the difference between reality and hallucination, what’s to stop you from reacting to the latter in ways that are irreversible? If you rip the phone off the hook after hearing a dead family member’s voice, how can you answer when someone real calls next?

You could say Bertino draws Louise and Michael’s experiences as a game. Rather than players, however, he’s rendered them as pieces moved by his true subject’s whims. This is the Devil’s story. The Dark and the Wicked is Satan entertaining himself with the dread of those he could kill in an instant if he wanted. But he doesn’t. He wants them to endure an agony they never thought possible and for us to question the veracity of what we see. Who is the strange priest (Xander Berkeley) arriving at their front gate? Who is allowed to come and go as they please (Andrews and Tom Nowicki’s Charlie) and who must be invited in? The longer anyone stays, the more susceptible they become to a fate outside their control.

And as the bodies drop, so too do the defenses of those left alive. Louise and Michael are shaken to their core and forced to make a choice. Will they abandon their father on the eve of his death? Or will they think of the family that resides elsewhere (Michael is married with two young girls)? Their eyes and ears beg them to run and yet their hearts keep their feet from moving because they know what doing so will make possible. No matter how ludicrous it sounds or how much they’ve built their lives on not believing, their father’s soul will be made forfeit the second they exit that house. How could they live with that? How could they live with knowing they might have stopped it?

That’s the power of love and the stubbornness of humanity. Because even when there’s no doubt about what’s happening, Louise and Michael still believe their actions mean something removed from this “game.” Ireland and Abbott Jr. steadily lose their capacity to put reason ahead of anxiety and yet they’re still driven by the idea that love conquers all. And maybe it does. Maybe they can look the Devil in the eye and refuse to budge in order to escort their father’s soul to Heaven. Who really knows for certain? As anyone who’s ever experienced great loss does know, however, it never plays by anyone’s rules—human or divine. It comes without explanation and doesn’t apologize. Why would the Devil want just one soul when He can have them all?

The Dark and the Wicked is playing as part of Fantasia International Film Festival’s 2020 online edition.