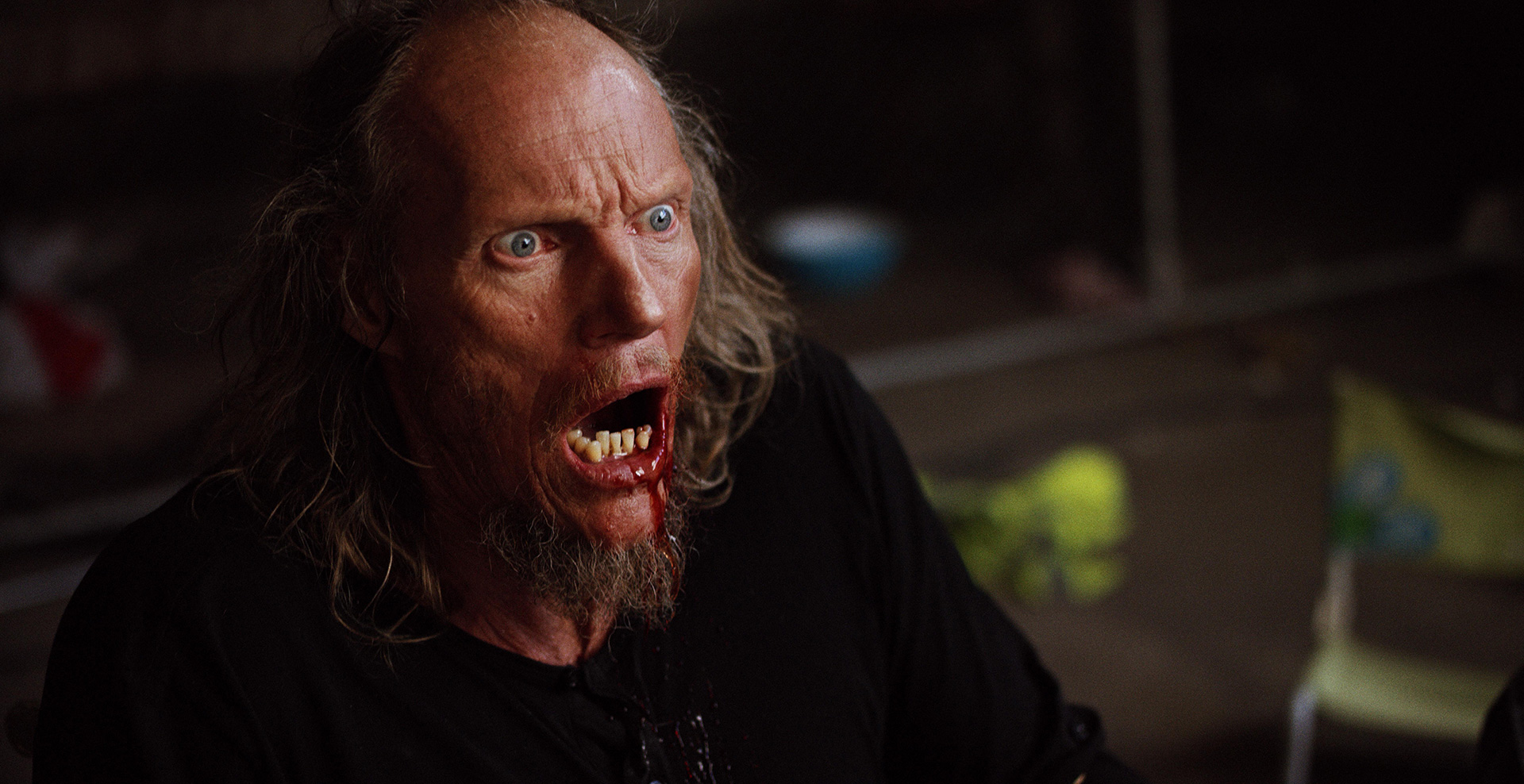 Barry (Gary Green) is a piece of work. He’s a deadbeat husband to Suz (Chanelle de Jager), deadbeat dad to their son, and all-around deadbeat to Cape Town on the whole considering he’s shooting heroin when he’s not roughing up people who owe him money because he’s been facilitating their habits too. As far as we can tell by the cursory introduction writer/director Ryan Kruger provides, Barry deserves every single insult Suz hurls his way when he strolls home well past the hour she expected. That his response is to accuse her of adultery (“the boy doesn’t look like me”) before leaving to drink at the neighborhood dive bar ensures he’ll never earn one iota of sympathy from us. It’s therefore good that he soon disappears.

If you’re wondering how that could be when the title of the film is literally Fried Barry, the answer is simple: aliens. Now you’re probably thinking, “Well that’s not simple at all considering how expansive extraterrestrial lore can often be in the science fiction genre.” Let me assuage those thoughts right now because Kruger doesn’t care about science fiction conventions beyond their ability to create a unique situation wherein anything is possible. Besides having fun with an abduction scene that’s edited with a similarly manic flare to numerous crank highs (if “anal probing” ever made you wince, just wait to see where these guys probe), what follows has less to do with the entity now possessing Barry’s body than with that nameless creature’s utter cluelessness towards everything else.

The question remains whether Barry tweaking off a potent dose courtesy of his junkie friend (Paul Snodgrass) would look any different than a foreign consciousness controlling his motor functions down a hedonistic rabbit hole of sex, drugs, and pedophilia with virgin eyes wholly incapable of hiding their perpetual WTF expression of pleasure-tinged horror. Do we ever properly meet this new character? No. Do we ever discover its purpose? No. It’s merely a clean slate construct to give the man formerly known as Barry carte blanche as far as getting into whatever warped activities Kruger cooked up. And I do mean warped as blood-soaked fellatio, an insanely accelerated pregnancy, and literal jaw-bending ravers on an entire bag of ecstasy will prove. Predicting what happens next is futile.

So don’t expect anything resembling a plot once ninety-minutes of this one hundred-minute “thing” (as Kruger labels it) reveal pure chaos. What’s surprising, however, is that events are never quite as disjointed as that reality might presume. The inherent lack of character growth thanks to having every potential learning experience occur to the alien host and not Barry diminishes much of its purpose beyond pure entertainment, but those cursed to live on the periphery are themselves changed. Whether that’s Suz finding this non-verbal, quasi-catatonic version of her husband a more giving lover than he ever was, a prostitute (Bianka Hartenstein) looking to turn a trick who has her life upended by a miracle, or a stranger saved from the brink of death—there is grace within the madness.

Even it is more or less beholden to a punch line of its own, though, considering each disjointed gag is intentionally folded into the next to manufacture a sense of narrative propulsion behind them. For example: a child abductor (Jonathan Pienaar) alluded to during a news broadcast inevitably gives “Barry” something to do for ten minutes when he too gets taken. And even though “Barry” should be easily exonerated of that man’s crimes once the police arrive, Kruger must relent if only to allow an insane asylum to be the setting for the next ten. That neither sequence has bearing on where we go besides serving as evidence for the passage of time, removing them only means a great bit player (Sean Cameron Michael’s Ronald) is removed too.

The same could be said about most scenes save those shared by “Barry” and Suz or “Barry” and the aforementioned prostitute. Say goodbye to those who add atmosphere (Sedick Tassiem’s Prophet) and those who assault, harass, or pleasure our lead and lose nothing of actual relevance. Doing so only leaves about thirty minutes, however, so you can’t begrudge the filler if it does its job to entertain. Some would surely say it doesn’t (this South African curio has cult status written all over it), but I’m not certain they will ever see it. Let’s be honest. If you read the synopsis, see the poster adorned by a confusedly crazed Gary Green, and still sit down anyway: you’re doing so with the knowledge that it’s your cup of tea.

Weird films like Fried Barry rely on that truth so they can consistently get weirder without losing their audience. I personally would have liked more focus on Barry himself considering how often we watch his consciousness treading water (a visual metaphor for taking a backseat to the alien) or remembering sober love with Suz. These moments open the door to go deeper into what’s happening beyond the prevalent absurdity and yet they do little besides remind us how Barry isn’t in control. Kruger might even be correct to gloss over their significance since the character doesn’t deserve empathy even to acknowledge his imprisonment. Those happier days exist to reveal something else instead: Green’s all-encompassing performance. They become a normalcy baseline that confirms the idiosyncratic brilliance of the rest.