Fantasia Review: Agnes is Not Your Mother’s Exorcism Movie 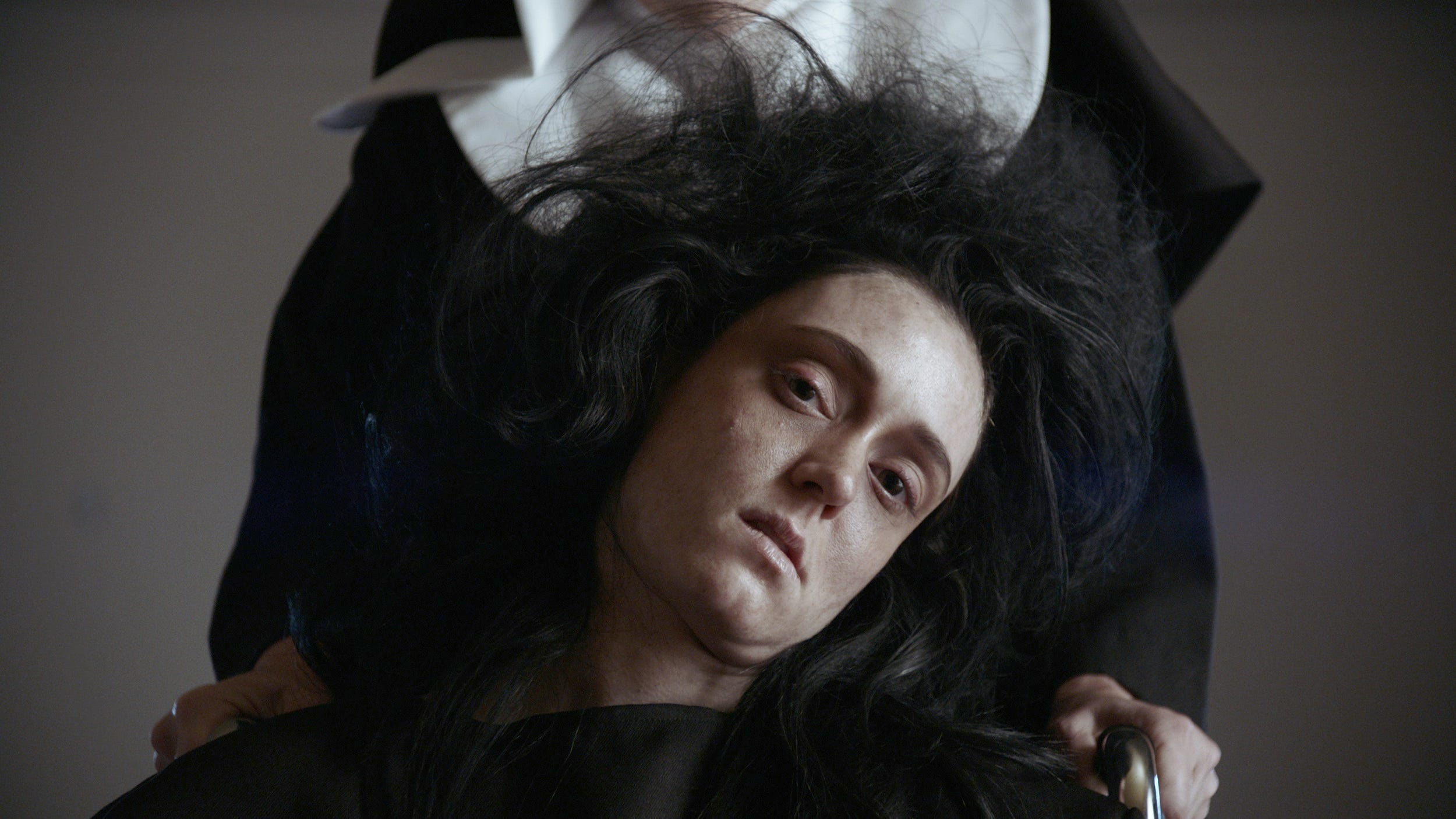 Agnes begins how any other possession film might––with the discovery of a demonic presence. When the convent of Saint Theresa fear there’s evil inhabiting the body of one of their young nuns, they outsource help from the diocese. Things quickly, expectedly start to unravel from there. But director Mickey Reece wants you to forget everything you know about possession and exorcism in film––or, well, maybe not. Because part of what makes his new feature Agnes work so beautifully is its very upending of expectations for that particular (and, arguably, very tired) horror subgenre. With over twenty-five feature films thus far, spanning his career since 2008 as a lower-budget indie darling––and who impressed with a wider reach with last year’s Fantasia staple Climate of the Hunter––Reece makes clear how films like The Conjuring franchise have been failing us. Reece (alongside co-writer John Selvidge) has crafted a disarming, funny, incredibly unique take on demonic possession about faith, womanhood, and, of course, horny nuns.

Sister Agnes (Hayley McFarland) falls strangely ill one night. She’s begun shrieking obscenities, performing otherworldly acts, and needs to be restrained in her bed. You know, that sort of “strangely ill.” Agnes had never shown signs of deviant behavior in the past, but Father Donaghue (Ben Hall) doesn’t believe in possession. He’s a particularly cynical man of the cloth, yet he’s the one who has been chosen by his diocese to lead the charge on expunging this potential demonic presence. It’s mostly due to Donaghue’s unsavory reputation and a criminal allegation against him––the kind that the Catholic church is historically infamous for. Donaghue is slated to be shipped overseas and out of their hair, thus, it makes sense that he’d be the one chosen to perform the rite of the exorcist, alongside his protégé, Benjamin (Jake Horowitz).

Saint Theresa’s Mother Superior (Mary Bass) is wary of Donaghue and Benjamin, the latter a handsome young man who Mother Superior does not trust to steer clear of the wiles of her lustful crops of nuns. But Benjamin exudes a far more pious nature than Donaghue, and he earns her trust even as the rest of the convent ogles his arrival like a wolf eyeing sheep. When first confronted with Agnes, Donaghue remains unconvinced of the true nature of her condition. But he has this belief increasingly tested to disturbing ends, running parallel to the wavering faith of the convent’s youngest nun, Sister Mary (Molly C. Quinn). Mary and Agnes had been close, and an intimate final conversation between the two of them results in Mary giving up on her chaste life for good.

It is here that the story of Agnes splits squarely in two, the exorcism narrative completely foregone in favor of one of a wayward soul in pursuit of her true sense of self. Who was Mary before she devoted her life to the Catholic Church? Mary doesn’t really know anymore, especially when that part of her life was marred by a tragic loss. So, Mary goes off and gets herself a tiny apartment. She takes on an unforgiving job at a grocery store oversaw by a slimy store manager (Chris Sullivan), and searches for herself in the remnants of Agnes, seeking out Agnes’s former lover (Sean Gunn). She does her best to assimilate into the role of a normal twenty-something woman, but her unfamiliarity with this world puts her at risk in a way that feels more heightened than if she were a normal young woman out on her own. Mary no longer has the support system of the convent, nor the garb that places nuns in a position of respect by the general public. Now, Mary is just like any other woman but, at the same time, she isn’t. Thus, every interaction is a potential threat, the supernatural horror of demonic possession surrendered in favor of the horror of someone lost and vulnerable in the midst of a crisis of faith. It puts Mary at this unique risk of being imprinted upon by far more sinister forces.

Agnes manages a multi-prong juggling act, not only expertly transitioning between what feels like two separate films, but between two separate genres and tones as well. The first half of the film dabbles in both horror and wry comedic wit, the nuns (who include The Craft’s Rachel True) frequently given the best and funniest lines––particularly, when they’re all crowded by the window to drool over Benjamin upon his arrival. Once perspective switches over to Mary, the film seamlessly trades horror-comedy for thriller-drama, and swaps its eccentric camera movements for ones suited to a more grounded world (cinematography credited to Samuel Calvin). There is the questionability of Father Donaghue’s accusations largely being glossed over, but it adds an extra, challenging dimension to this character who we’re initially forced to identify with. It feels like a sly sort of trick for an audience who is used to aligning with those who are there to purge a great evil, like devout demon-hunters Ed and Lorraine Warren of The Conjuring franchise, or Father Damien Karras of William Friedkin’s The Exorcist. Instead, we must align ourselves with a priest who may or may not have committed a horrible sin.

Of course, our time with Father Donaghue only lasts for so long, before we’re spending the second half of the film with what seems to be a far more morally empathetic character. Agnes is a possession film, but it’s about a different kind of possession; a far more human kind, not limited by the purity of one’s soul or their devotion to God. Through its subversion of genre, precision blending of tones, and compelling performances that flit between idiosyncratic and naturalistic, Agnes is a welcome addition to the exorcism subgenre and to the horror genre overall, proving that no well has run dry if you’re willing to bend conventions.