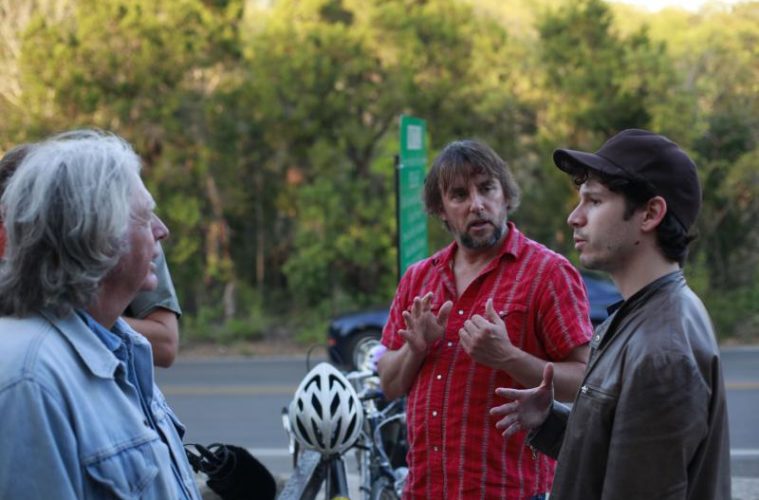 Watching a documentary like Double Play, which is currently out on VOD, is about as relaxing as can be. Director Gabe Klinger decided from the outset to be a fly on the wall and watch two filmmakers admire and astound each other with stories and interactions. In this case it is Richard Linklater and James Benning. Truly, you will feel privileged to be intimately in the company of these two.

I recently had the opportunity to talk with Klinger over the phone. Together we discussed why no one outside of these two filmmakers directly appears in the film, his notion of why he chose to be a fly on the wall documentary instead of something more intrusive, his feelings on Boyhood, what film blew his mind, why he thinks more is happening in James Benning’s films versus Michael Bay’s, and much more. Below you can catch my entire conversation with Klinger.

The Film Stage: I’m curious about the way you went about this because it almost seems like you’re not steering the conversation at all. Was that your mindset going in or did they just carry a conversation so well with each other that you just stepped back and let it happen?

Gabe Klinger: The latter, really. I think going into it we had established expectations along those lines, too. They knew that I was going to rely on them to carry the conversation. I really am a big fan of observational documentaries instead of interrogative. I don’t know if I’d put it in as clean of categories as that, but yeah. I remember when we premiered at Venice last year in September the same day that Errol Morris was premiering his new film, The Unknown Known about Donald Rumsfeld. I couldn’t think of a more opposite approach than ours in Morris’ case.

Both filmmakers talk about the moment in film that blew their mind. So I’m going to ask you. What was your moment?

There are several. I remember a Robert Bresson retrospective that I saw where there was A Man Escaped and Balthazar really blew my mind. They were just really arresting and I felt like the world around me had just vanished and I was completely absorbed in what I was seeing. I remember sitting in a theater watching A Man Escaped. I was completely still. Not a single muscle in my body was moving, it felt like. These are the sort of experiences you just sort of reflect on later on. “What happened that I was so intensely devoted to that one thing in that moment?” I don’t know. I go back to a larger question of why art? Why film? The answer is usually pretty clear. There’s nothing quite like it in the real world. It’s so contained in art. You can create these imaginary environments and project your own fantasies and desires. It’s a very appealing thing. It’s also a thing that comes with a lot of responsibility. And that’s what I’m trying out now, making my own films. As I’m watching this film, I noticed that nearly all of the clips of Benning’s work are mostly fixed perspectives of a scene for an extended period of time. I imagine that there are moments of things happening on screen beyond the naturalism captured. Cars, planes, things of that nature. I’m curious if you wrestled with that at all?

It’s very relative. Your experience of Benning can be very different from my experience with Benning. As Linklater himself comments in the film, we might be having the same experience in a theater but we’re all having very different experiences in our minds. For me, a lot is happening in Benning’s films. Conventionally speaking, narratively speaking, there’s not a lot going on. But you sort of have to refocus your brain to figure out what is going on. So watching a static shot of the clouds, there’s quite a lot going on. You could argue there’s more going on there than a Michael Bay movie. The way the light is moving and the way the wind is determining the trajectory of the clouds. The intervention of nature and Benning himself with the angle he’s chosen. There’s certain manipulations of sounds. There’s a shot of the clouds in a static shot but in the soundtrack you actually hear a cityscape. So you have this very placid… Most of the time when we look at nature in film, it’s in a very placid setting. Benning kind of reminds us in the moment that you can look up into the clouds and just see nature in its fullest. But then on the ground, you maybe have buses and trucks and carbon monoxide. So all of a sudden Ten Skies becomes an environmentalist film in a certain way. You see certain cloud patterns that are not only influenced by nature but are influenced by man. And that’s a pretty profound idea as the movie is going along. Especially since it’s not narrated. It’s just something we have to intuit.

The film focuses a bit on Linklater’s most recent film, Boyhood. Having seen it myself I’m curious to get your reaction to it.

I think we can connect it to this idea of nature because what Linklater is doing is kind of observing his actors mature. I use the word mature but a lot of people have been using the phrase growing up. To say they mature is more accurate because we all mature, over time, constantly. But we don’t always grow up. [Laughs]. So in Boyhood, there’s something going on with the environment and certain situations that influence the aging process. So in a way you can say that Linklater is doing something in the same observational mode as Benning. Which I find very interesting.

If I’m not mistaken Benning even comments on that throughout the film. He mentions that several times. Even though what they’re doing isn’t exactly the same, it’s is in similar because Linklater is observing these actors through a time period whereas most films you never get to see them age even six months.

Absolutely. It’s a very brave film in that sense and on a more scaled down level it’s been done before. I’m thinking of something like David Perlov‘s Diary where he documents his own family over a period of time. There are other examples in documentary cinema but Boyhood is a disconcerting experience because you think you’re watching a film made in the conventional narrative model. Like a 40-day shoot, typical kind of production infrastructure, low to mid-budget American movie. But what you’re actually seeing is this long-form experiment. So it’s very disconcerting. You’re half expecting the seams to show and remarkably they don’t. The design of the film is almost flawless. There’s a few things like Patricia Arquette looks very pregnant in one moment and things like that. But I even love that it’s flawed. I think the flaws of the movie, and it gets messy at times. I appreciate that. I think so many filmmakers get so anal retentive that they don’t allow themselves to be messy or experiment.

I’m thinking of people like David Fincher and Steven Soderbergh who are just very methodical and precise. Everything in their films are very thought-out and Rick is the kind of filmmaker that likes to put up a lot of things on the screen and he also, more than most American filmmakers, relies on the collaborative process to determine things like the basic structure and plot points. I know he consulted with Ellar Coltrane and the other people in the film about their own development so it would seem more organic. There weren’t a lot of developments for the sake of developments. I think it’s almost like a documentary approach or almost like something you’d find in a more experimental register. Even the first shot, if I’m not mistaken, of Boyhood is of the clouds and Mason Jr., looking up at the clouds. And I actually commented to somebody that, “Oh, maybe that’s a wink to James Benning’s observational cinema.” [Laughs] This little kid contemplating the clouds. That’s James Benning’s cinema in a nutshell.

The film is obviously about these two men and their interaction both cinematically and appreciating each other’s work. But at some point you did interviews with people outside of the two of them. What was the decision there? And did you actually do any interviews?

I did not. It was never going to be that kind of movie. We had a very specific design for it that we stuck to. No, that’s actually a lie. It did cross my mind at some point to get a few other people involved. I’ll tell you this sort of short list of people. But it just became apparent that we wanted something a bit more focused. A lot of docs nowadays try to reach a little bit too far and they never quite get there. They want to tell a sort of overarching story. They want to be all encompassing. That was never our approach. It was going to always be this fly on the wall thing. But I did think it would be fun if a couple of other people came in for like the baseball scene. So we put out feelers to various people. Matthew McConaughey, Lee Daniel, who is Linklater’s longtime cinematographer and collaborator, and I can’t remember anyone else.

Yeah, actually I did email with Ethan about it. But it just didn’t work out with anyone else’s schedules. And then Wiley Wiggins, who was Mitch Kramer in Dazed and Confused. Wiley is a local. It would have been cool but I only thought of him in retrospective. But in the end I’m glad our focus didn’t stray away from Rick and James because it lends such an intimate quality to the movie.