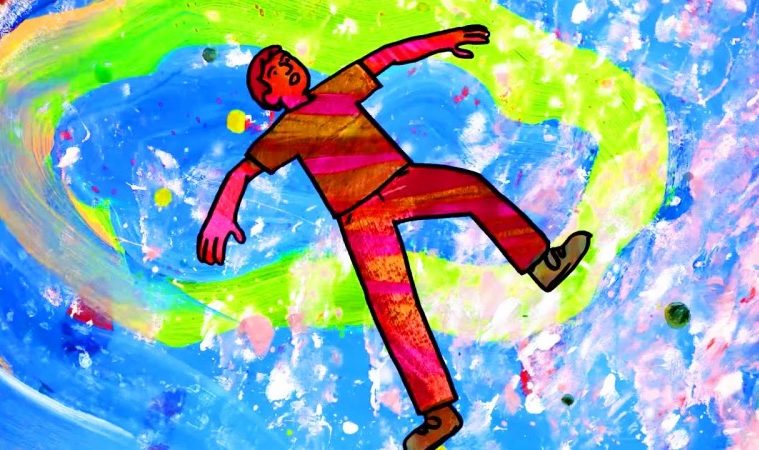 My Entire High School Sinking Into The Sea is more than just another animated comedy full of high school angst. Written and directed by Dash Shaw with a voice cast that includes Jason Schwartzman, Reggie Watts, Maya Rudolph, Lena Dunham, John Cameron Mitchell, and Susan Sarandon, the film enjoyed an acclaimed run on last fall’s festival circuit, premiering at the Toronto International Film Festival and going on to screen at Fantastic Fest and the New York Film Festival. As the film arrives in limited release courtesy of GKIDS, we spoke with the filmmaker about the inspiration behind and process of bringing the semi-autobiographical, small-budget high school adventure comedy to the big screen.

The Film Stage: Thanks for speaking with us. We’re about the same age and I think I recognize a few of the influences in the film from comics, cartoons, books and movies. What were you watching and reading back then that influenced the film?

Dash Shaw: When we were teens in the 90s, the main alternative comics were auto-bio comics like Chester Brown, Julie Doucet — all of these people post-Robert Crumb. The opposite of that was the boys adventure comics, the superhero comics, and so the spark of the story idea was to have the autobiographic comic that’s been warped to favor that character’s perspective, so that you have a boys adventure comic landscape. And it felt like that’s what a lot of those auto-bio comics were about, was seeing the world through Chester Brown’s unusual perspective than they were about anything grounded in reality. Also in the 90s, there was anime, and I went to all of the anime conventions and a lot of those cartoons were about schools in danger. Like every Sailor Moon episode was about a monster attacking your school. Even the cartoons for adults like Urotsukidoji, the kind of tentacle porn movie, was about a demon attacking a school.

What I love about the film is has a distinctive hand-drawn aesthetic. It looks a little like something a high schooler might draw in the margins of their notebook in class. How did you adopt this aesthetic as an animator and an artist?

It’s basically traditional hand-drawn animation done using a computer instead of a camera. I scan in the drawings. Every line is made on an 8.5 x 11 sheet of paper and all of the background is acrylic paintings. What you mean by it looks like a teenager did it, in that its partly intentional, it’s all about reinforcing that character’s perspective, but it’s a combination of different choices. I’m drawing with a very thick line and a lot of illustration is drawn larger and shrunk down but there’s like a thick coloring book line which means I can do a lot of strange things with the color and the line is still legible. In a coloring book the lines are thick so that if a kid scribbles over them you can still see that there’s a drawing. So it’s a very blunt line. In the 1970s there was an illustration movement called Heta-Uma which means unskilled use of skills, and one of the main artist was a guy named King Terry and the idea was that they would subvert conventions of illustrations so there could be no logical perspective that instead of drawing lines and shrinking them down, they’d draw small and blow them up. And the idea was to challenge ideas of beauty and questioning what you find beautiful and it has a wonderful punk sensibility behind it. And of course it was appropriated by people that were not very skilled in the first place.

I always felt like there should be something raw and messed up about these cartoons and it should be like these lines are animated Frankenstein-style — it isn’t pretty but it’s alive and coming at you. I knew it would make sense for this story and them being younger and it feels they could maybe have drawn this, but also it also felt like it would be really cool to see a movie like that.

And that aesthetic is mirrored in the plot of the film, especially someone like Lunch Lady Lorraine [Susan Sarandon] who becomes a kind of superhero.

The plot came first, so it made me make these decisions. I always start with story first and the style came out of what I thought would be the best way to tell that story.

A lot of those people I had met before like John Cameron Mitchell, we had done a Sigur Ros video together and I did the drawings for his film Rabbit Hole. In his case, I just emailed him. Jason Schwartzman I had known for years. Lena Dunham I met at the Sundance labs. And for people I didn’t know like Susan Sarandon, we had a lot of the movie drawn, so we could go to her with a movie that’s 90 percent drawn, and its amazing we got that cast. It helps that the ball was rolling. It’s not like we tried to get that cast and draw that movie. We had a lot of the movie drawn already and we were able to change their faces to match their expressions, but no one’s character’s design was based on that actor, because we were already underway.

I remember from TIFF you brought on stage your team at the Ryerson. It was a small production. What was the production process like?

Jane Samborski and I are married and she’s the lead animator on the team. We lived in the same apartment when we were drawing it. It wasn’t like an office. There wasn’t departments; I storyboarded it and used that to make a sheet: scene 3, shot 10, background by Frank Santoro – who is a comic book artist I know, so I asked him to paint some of the backgrounds – and pencils by Jane and ink by Dash. We divided up that way. I thought of it much more like a band — with one person drumming and another writing and singing the songs — than a movie studio.

How long of a journey was it from script to premiering it last fall?

The script was written 2010 and premiered at TIFF in 2016, so six years but it was kind of a side project for many years so it exaggerates the amount of time.

I’m always curious about how a long-term project evolves as the project grows and evolves.

I tried for many years to make an animated movie in a more normal way where you get cast attached and trigger financing and it never happened. So this film evolved around what was achievable with a few people and no money. I didn’t even think I would get great actors, so the joke of the movie is that there’s all this disaster going on and the actors remain kind of deadpan about this high school experience and that would maybe still be funny if the voice talent were great. So pretty much every decision was based on what was possible. When the other movie fizzled — and that was a hard time because I tried to it and I failed – [I said] I am still going to try to do this. That was a big blow at the very beginning and I was never a super successful comic book artist, but I was creatively satisfied and involved in multiple projects, but I still wanted to see an animated movie that looked like this and I still thought I could do it. And then when the voice cast came on in 2014, that was the opposite of a hurdle. When I was working on this for so many years I thought no one would see it and now they will. It didn’t really change the scale of the production, but now we’re thinking maybe some people will actually watch it now when we’re all done.

That certainly is the case with the release this weekend!

Yes. It’s getting a theatrical release this weekend in New York, LA, and Toronto. In New York at the Metrograph they’ll be a lot of artwork from the movie in the lobby and I curated their bookstore. If you’re in New York, it’ll be a special experience.

Any teasers about what you have planned for this weekend at Metrograph?

I’ll be doing Q & As with Jane and on Friday with Thomas J. Ryan, Saturday, John Cameron Mitchell will be there – in the bookstore there’s a lot of things that inspired the movie like Adventures of Prince Achmed by Lotte Reingier and Devil Man, a 70s TV series, and some contemporary comics I think people who like the movie will like from Anya Davidson. If you’re going to the Metrograph you’re probably with it, but you might not know much about contemporary comics, so if you’re curious I’ve figured it out for you. You can buy one of everything and you’ll be set!

My Entire High School Sinking Into The Sea is now in limited release.