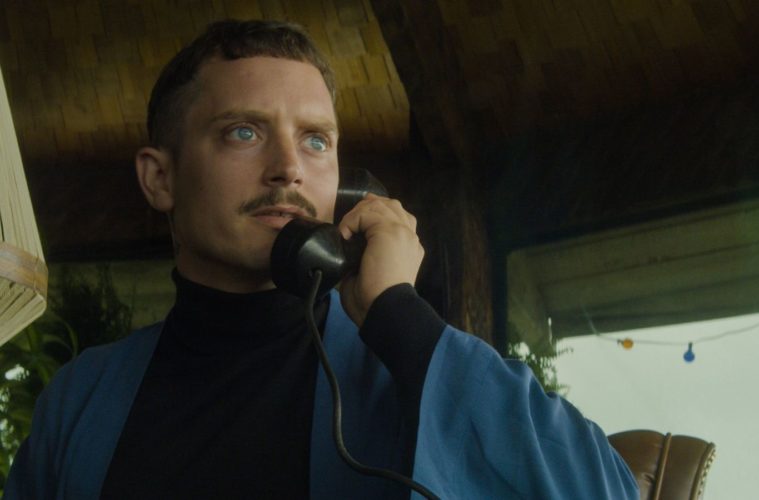 No one has ever mistaken Elijah Wood for a tough beefcake. Standing just 5’6’’ and probably weighing little more than a wet blanket, the veteran performer has made quite the career out of playing fragile, shy, broken, or insecure young men, then turning those expectations upside down to dizzying effect. Even at 39 years of age he still looks the part of an awkward teenager trying to carve out a safe space in an unwelcome world.

Believe it or not, Wood has now entered his fifth decade of working as a professional actor. Throughout that time he’s evolved from wide-eyed child star (North, The Good Son) to wide-eyed savior (Lord of the Rings trilogy) to wide-eyed psychopath (Maniac) with many variations of the like in between.

Ant Timpson’s Come to Daddy seems to understand these chameleon-like tendencies exist but doesn’t always know what to do with them. In the opening sequence of this nasty thriller, Wood’s character Norval Greenwood gets dropped off by a bus in the middle of frontier country and begins walking through the forest city slicker luggage in tow.

The towering pine trees and stoic mountain faces seem to watch in judgment as the meek Norval struggles to make his way through the rough terrain. Finally, he emerges onto the rocky coastline and sees a massive house on stilts overlooking the ocean; he later describes its style as “1960s UFO.” Seconds later Norval knocks on the door and is greeted by his father (Stephen McHattie), This skeletal booze hound has inexplicably invited his son to this isolated enclave after being absent for three decades.

Needless to say, the reunion isn’t warm and welcoming. Harboring years of resentment and anger, Norval nevertheless initially seems optimistic at the chance to make amends and find out the inspiration behind his father’s supposed mea culpa. Almost immediately though, McHattie’s drunken abuser starts flinging insults and playing mind games (strangely he doesn’t comment on his son’s horrendous haircut). Anyone who remembers McHattie in David Cronenberg’s A History of Violence knows this is an actor capable of turning on the evil switch. Poor Norval becomes more unnerved as the days pass.

Toby Harvard’s wily script doesn’t play its cards for a long time, giving nearly half the film a sluggish and repetitive feel as the elder Greenwood grows increasingly incensed at Norval’s presence. But when Come to Daddy finally kicks into gear, it subverts the surface narrative nicely with some subterranean plot twists that challenge perceptions of Norval’s familial past.

As opposed to the early scenes in the film, Timpson feels far more comfortable directing those where the emphasis is focused on conjuring up narrative momentum rather than ghostly suspense.  Come to Daddy’s noirish final section is gleefully unhinged, and gives Wood plenty of opportunities to explore his character’s buried capacity for ultra violence.

Casting great actors like Martin Donovan and Michael Smiley in key supporting roles helps open up the film’s vision of the world as a brutal place with no shortage of feral surprises. It’s a testament to Wood’s talents as an actor that he can weather the storm with such meek gracefulness even when the situation at hand calls for wrath.

There’s nothing subtle about Come to Daddy’s brazen antics. After all, the film does begin with dueling quotes from Shakespeare and Beyoncé about fatherhood’s cursed blessings. Still, there’s much to admire in the tonal balancing act it manages to strike. That a film can be this venomous and sincere at the same time indicates genuine dedication to the finer points of B movie mayhem.

Sulking and seemingly concussed, Wood stands at the center of nearly every shot, those kind eyes in perpetual awe of the awful things that people can do to each other. It would be hard to imagine any other actor pulling off this sort of feat without diverging into irony or cynicism.

Come to Daddy opens in theaters and on VOD on Friday, February 7.