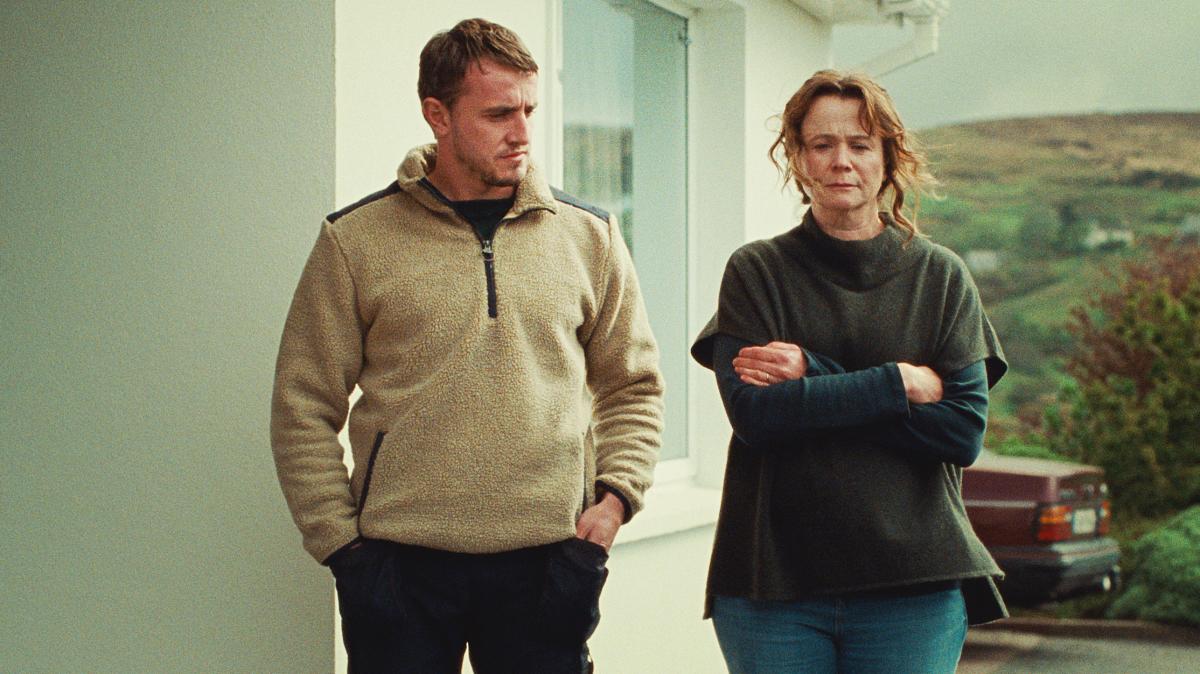 Some actors slip into familiar roles like old sweaters. Emily Watson might prefer a raincoat. The actress first graced our screens in Breaking the Waves for Lars von Trier: her eyes peeking out from under a wooly hat, whipped by wind and rain, and carrying the sins of an entire town. The great actress faces those same elements again in God’s Creatures, trading von Trier’s nightmarish vision of the Scottish highlands for a doom metal take on Ireland’s Atlantic coast.

Written by Shane Crowley in collaboration with the producer Fodhla Cronin O’Reilly, God’s Creatures tells a story about sexual assault and collective denial that is as universal as it is inseparable from its locale. The film is directed by Saela Davis and Anna Rose Holmer, American filmmakers whose brilliant 2016 debut The Fits showcased a true flair for building suspense, not to mention an appreciation for shared psychosis––which comes to bare again in God’s Creatures, right from the churning waters that open their film all the way to its grim denouement (helped to no small degree by Saunder Jurriaans and Danny Bensi’s relentless score.)

Positioning itself less in the realm of social realism and edging ever closer to horror, the film stars Watson as Aileen, manager of a seafood factory in a fishing village somewhere in the wild North West. (The film has some of its best moments going into the minutiae of that salt-flecked profession.) Amongst her colleagues is a young woman, Sarah (Sing Street’s Aisling Franciosi, still providing a tune or two), who one day comes to work with bruises on her face—it seems not for the first time. Aileen and her staff emit the unmistakable camaraderie of shared early mornings and hard labor, yet there is an unspoken agreement not to meddle too much. Sarah’s difficult home life is taken as a given; theirs is a town where things are left unsaid.

The drama is drawn from a crippling moral dilemma. Aileen is the matriarch of the O’Hara clan: daughter to Con (Declan Conlon), who suffers from dementia; mother to Emma (Isabelle Connolly), who has moved out; and also to Brian (Paul Mescal, curdling his decent guy charm to interesting ends), who one day arrives home from Australia unannounced. (Aileen greets him with cautious delight, choosing not to pry). They quickly rekindle a doting mother-son relationship until a night Aileen leaves Brian at the bar alone with Sarah. The next day at work Sarah faints, and soon accuses him of assault. Aileen, through some combination of self-delusion and the fear of losing him again, chooses to take her son’s side.

Making every moment grim is to risk over-saturation, but Davis and Holmer’s deft direction keeps things compelling here, skilfully leaving plenty of things unsaid and with the confidence to allow key events to happen offscreen or in the margins. The decision to focus on the character of Aileen and not the victim or the abuser also gives their film an unusual texture: the blame might land on the true culprit, but the film makes sure to equally implicate anyone unwilling to act on a victim’s behalf.

Similarly, Holmer and Davis bring a welcome outsider’s perspective on Irish parochial themes, while still seeming quite at home to the place and the material. Significantly, the film appears to be set before 2002, going by the currency. This positions the story in a rather different time in Ireland, a country that in recent years has taken significant steps to escape its own repressed past (though tellingly, on more than one occasion a character in this film will comment on how things never change). All that said, the film can’t quite hold the weight of its own suffocating mood: Sarah’s callous neighbors would perhaps have been more at home in a less pressing folk horror; the climactic moment is well-executed, but ultimately about as difficult to digest as it is curiously signposted.

Watson and Mescal are nevertheless exceptional and worth the entrance fee alone, their strange Oedipal energy only adding to the sense of a world off-balance. DP Chayse Irvin finds intoxicating cruelty in an otherwise postcard-friendly landscape that has, through no fault of its own, recently become a kind of cinematic shorthand for existential despair. Seen on crackling 16mm, Donegal’s grey skies, jagged rocks, and relentless waves form a thrilling doom-pastoral aesthetic that is nothing if not in vogue: look to Martin McDonagh’s Calvary, Nick Rowland’s Calm with Horses, and Donal Foreman’s The Cry of Granuaile, all made in and around those same shores. There might just be something in the water.