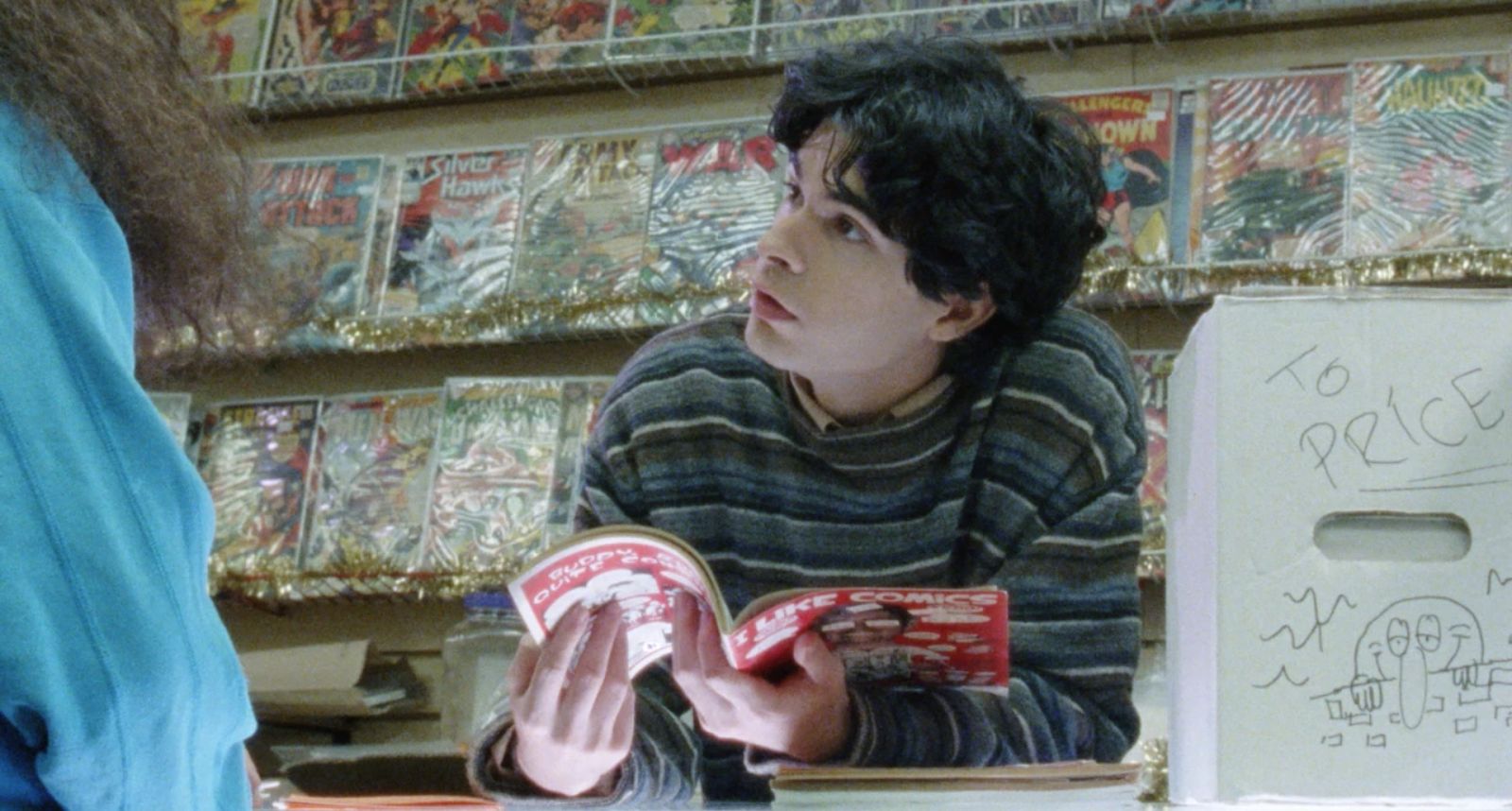 The deranged lunatics populating Owen Kline’s absurdist, bleakly hilarious Funny Pages are all somewhat anachronistic; loners who gravitate around old things and old places, one foot always firmly rooted in the past. Even teenage Robert (Daniel Zolghadri) nurses what feels like an age-inappropriate nostalgia. A high school senior stranded in an anonymous suburban stretch of Princeton, NJ, he works at the local comic store while daydreaming of becoming a cartoonist himself. But the comics he loves and devours with pantagruelian appetite are much, much older than him—the kind of niche, underground relics no one seems to recognize, much less appreciate. Funny Pages tracks Robert’s coming of age, but Kline (here in his directorial feature debut) dexterously avoids the genre’s trappings. His isn’t just a portrait of a most complicated chapter in a young man’s life, but an homage, in turns affectionate and savage, to an untimely culture and untimely breed of people, forever out of synch with the world around them.

It’s a condition that applies to Robert as to the countless eccentrics that cross his path. Take the first: as the film opens, the teen is busy showing his cartoons to art teacher Katano (Stephen Adly Guirgis), a man with some wildly unusual tutoring methods. A few minutes and some outlandish compliments later (“these are 17-year-old Michael Jordan,” Katano beams at Robert’s sketches), he strips naked and jumps on his desk, taunting the lad to sketch him—to make some point about life, drawing, and creativity, I guess. Whatever that may be, the mentor-mentee relationship ends prematurely: running after Robert to make sure the student did not misinterpret his intentions, Katano is killed in a car accident. The tragedy shakes the boy, only cementing his belief that making it as an artist requires first and foremost severing all ties with middle-class parents and the dull future they’ve planned for him. Fleeing Princeton, Robert finds a room (or rather, half a room) in a basement-turned-apartment in Trenton, already home to two outcasts twice as old, and lands a job for a public defender. It’s here that he meets Wallace, a cantankerous figure who once toiled as “color assistant” for legendary label Image Comics and now stands accused of assaulting a pharmacist. Stunned by the stranger’s CV, Robert begs the fifty-something to take him under his wing and hires Wallace for private drawing lessons—never mind the guy’s unhinged lunacy.

It’s all a recipe for disaster, and it’s hard to believe Robert doesn’t foresee the sort of mess this unlikely collaboration will stir. But the boy isn’t all too simply looking for some private tutoring; his attempts to cajole Wallace into teaching him belie a much more complex, more profound, lacerating urge. As a child actor Kline got his break as Jesse Eisenberg’s kid brother in Noah Baumbach’s The Squid and the Whale, another film that centered on youngsters as they struggled to navigate an adultless world. Robert’s parents (played by Maria Dizzia and Josh Pais) aren’t at war with one another the way Jeff Daniels and Laura Linney were in Squid, but they just can’t provide the kind of artistic mentorship Robert’s after, and there’s something heartrending about watching the teen look for guidance in all the wrong places.

Yet Funny Pages isn’t an overly grim affair. Sure enough, Kline’s film is stashed with bleak moments, vividly amplified by Audrey Turner and Madeline Sadowski’s production design. The hovel Robert ends up sleeping in as he abandons Princeton is a filthy, fetid vision yanked out of a Subreddit on accommodation nightmares. “Nobody must know you live here,” creepy landlord Barry (Michael Townsend Wright) warns the boy; judging from the state of things, you wonder if Robert would ever want people to know his address in the first place. Crammed, stuffy, and sweltering under the heat of a boiler Barry can only shut once a week (“for legal reasons”), you can almost smell the stench of mold, damp clothes, and rotten food. But Kline milks these details for all kinds of laughs, and there’s a curious meta feeling about the film’s vignettes. As Robert turns to the weirdos around him for inspiration and reality bleeds into his drawings, Funny Pages itself seems to unfurl as a comic book of sorts, as bizarre and surreal as the underground strips his protagonist reveres.

Nearly everyone here is fluent in a certain dialect, a comic-ese of Cartoon Quarterly and Doofus; still, for all its references, Funny Pages never comes across as hermetic. You do not need to have flicked through copies of MAD or Cracked to appreciate the kind of anthropological work Kline is after when he lets us hang with his platoon of inveterate nerds. It belongs to two of them, Robert and Wallace, and slowly morphs into a disastrous pas de deux—a series of gags both hysterical and cringe-worthy. Mileage will vary depending on one’s ability to stomach Wallace’s outbursts and fits; I found them irresistible, even at their most extreme, thanks in large part to Maher’s impressive work. Funny Pages is Robert’s story, but the scene-stealer is his putative master, who through Maher’s feverish, neurotic performance swells into a buggy-eyed volcano of man, always unpredictable, always seething with rage. You could say the same about all of Kline’s oddballs, a small platoon of off-kilter, psychotic no-hopers. That said, for all their tics and quirks, their emotional core remains somewhat relatable.

This is, at its core, a story of a young man struggling to find his voice while slowly waking up to the fact that the dream may never come true. Hence perhaps the strange nostalgia this is drenched in. Shot on Super 16mm by Hunter Zimny and Sean Price Williams (a regular cinematographer for the Safdies, who here serve as producers), Funny Pages has a gorgeously retro, granular aesthetic and few temporal markers, an aura that yokes it to an indeterminate present. It’s a work as faithful to its peculiar milieu as it is universal in its themes—a coming-of-age that feels, in a wistful and cumulatively moving way, like going back in time.