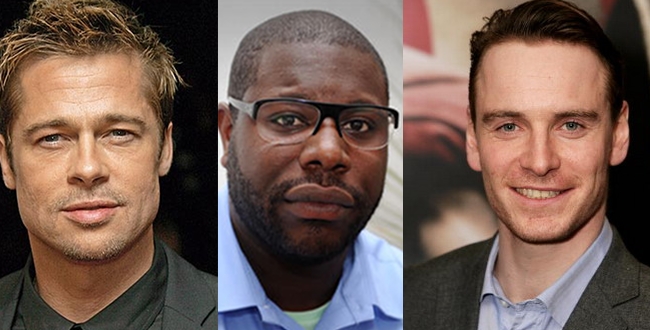 In the mean time, the new duo (a la Scorsese/DiCaprio, Burton/Depp) are prepping their third feature together, 12 Years a Slave, starring Chiwetel Ejiofor (Inside Man, Redbelt) as well. Now, Brad Pitt, who is also producing via his Plan B banner, has joined on. [The Playlist]

Shooting from a script by McQueen and John Ridley (Three Kings), Slave tells of “Solomon Northup, a free black man who was kidnapped in 1841 and sent to a slave plantation in Louisiana, which he was rescued from in 1853.” Ridley wrote the memoir of the same name. Pitt and Fassbender’s roles has yet to be confirmed, but one would imagine at least one will play one of the men who, posing as circus promoters with a job for Northrup, captured the black man in Washington D.C. and threw him into slavery after living a free life in New York.

This continues Pitt’s recent track record of interesting role choices with interesting filmmakers (The Tree of Life, Inglourious Basterds and The Assassination of Jesse James by the Coward Robert Ford stand out), making him one of the most intriguing (as well as last remaining) movie stars in the business.

How do you think Pitt will fit into the McQueen/Fassbender formula?