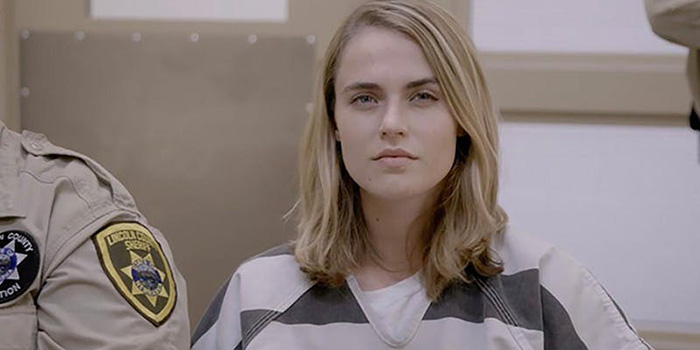 We never meet the narrator (Nick Offerman) of Bob Byington’s film Frances Ferguson. This isn’t necessarily a bad thing or uncommon, but I couldn’t shake the idea that we should. It’s because he isn’t some omnisciently objective voice telling us a story. He interjects opinions, giggles, and often meanders to the point where his subject (Kaley Wheless’ Frances) must speak up to help him along. In one instance he mentions a “We” as though his (and another’s) entrance on-screen was imminent. It’s not. He means us, now … maybe. The film never acknowledges the weird duality of his presence as someone and no one simultaneously. It’s probably just a quirky choice for comedy within a dryly-quirky film I’m reading too much into, but it frustrated me without end. So here I was trying to wrap my head around the mechanics of what I was experiencing while Frances’ journey sought to become paramount. Because I logically knew I should be letting Offerman fade to the background since Byington was very intentionally looking to let his lead take the reins and traverse the faulty gendered psychology ruling small town America, I did my best despite that social commentary often selling itself short. The idea is to show Frances as this unicorn amongst sows—a rare beauty nobody in her Nebraska neighborhood could ignore without really putting forth the effort. Old men unsolicitedly tell her she’s gorgeous. Checkout boys recognize her as a uniquely unforgettable substitute teacher. And total strangers dismiss her as a whore with a single glance.

When she gets caught having a sexual affair with a sixteen-year old student (Jake French), we’re asked to question her guilt. How can a society that sees Frances as a piece of meat with which to project whatever lust or label upon her they want suddenly turnaround and give her full power in a scenario wherein a child willingly engaged in a relationship with her? Whether she’s the rapist or the raped, they’re judgmentally saying, “She asked for it.” But here’s the thing: statutory rape has no wiggle room. She was the adult who should’ve known better, he was the victim fallen prey to fantasy, and her lack of remorse proves sociopathic. That Frances must wear her “scarlet letter” without context is unfair, but her crime is non-negotiable. This is where I found myself disengaging. Byington and company’s hope to shed light on the situation’s complexities and inequities women combat every single day is undone by their use of a black and white issue to drive their point home. We do need to think about how the malaise that drove Frances to implode her life was affected by a horrible husband and narcissistic mother (Jennifer Prediger) all while raising her daughter (Ella Dolan), but none of it excuses what she’s done. It’s difficult not to think the filmmakers believe it should, though, considering they unceremoniously fade out French, Poulson, and others with Offerman’s “This is the last we see of them.” Frances should erase them all to move forward, but guilt should exist where French is concerned.

Is she therefore exempt because she’s a victim of society? That’s too reductive a thought to blindly condone. So while I enjoyed much of what happens afterwards (Frances going to jail, embarking on community service, and joining a compulsory support group led by David Krumholtz), the ease at which we’re supposed to provide her uncompromised empathy becomes untenable. She was compromised and no declaration along the lines of “bad things must happen to put your life back on track” is enough to forget. It’s as though the film is a physical manifestation of Bill Maher’s unforgivably flippant comment that women teachers having sex with underage boys should produce one reaction: “Atta boy.” Is that also part of Byington’s commentary? It wasn’t clear enough to count if it was. The film wants to show Frances as a product of her environment and expectations who used this misguided act of “defiance” to reclaim agency. She was bred to marry young and be a fantasy for strangers while not being allowed to have fantasies of her own. This life was crippling her and she saw a quick way to get what she wanted, ignoring the immorality of how she’d be achieving it. Frances Ferguson is provocative in its calling out these cultural problems through the prism of crime—but Frances’ sentence isn’t presented as a double-standard. Byington quickly sweeps the rape under the rug plot-wise and therefore prevents us from recognizing how her punishment for “consensual sex” is incongruent to men set free as “boys with too much to lose.”

That mode of thinking would have been interesting if it were present. The rape is instead merely a catalyst for Frances to take control back away from the people who feel as though they own her. In that respect it’s a hilariously off-kilter success thanks to a wonderful central performance by Wheless. Her character has hit her breaking point to become a sardonically combative wild card within a community that demands she fit the mold they’ve created for her to adhere. I simply couldn’t enjoy that aspect fully since it was built on the back of something that deserved more time to process. French’s character is another part of society placing ownership over Frances’ body, but it’s also the one example herein where she wasn’t innocent by comparison.