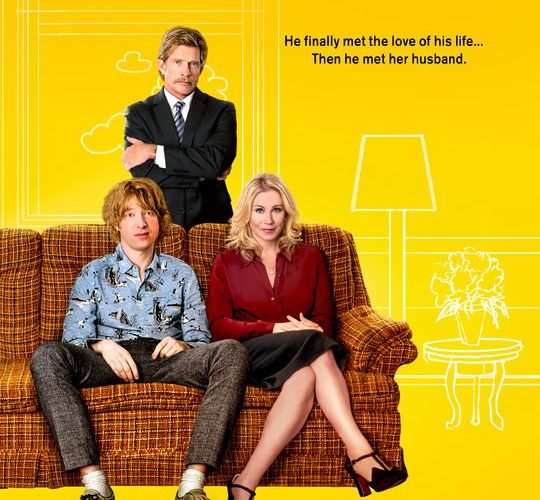 Morgan (Christina Applegate) is drowning in a marriage on the rocks. Both her career and her husband’s (Thomas Haden Church’s Grady) are booming — the time allotted to spend together often earmarked for something else. So they’ve drifted apart over the last fifteen years. Their sex life is non-existent and he’s away on business trips that “run long” more often than not. Why wouldn’t she assume he was therefore cheating on her? No reason besides a level of trust that appears non-existent in a day and age where the worst is usually believed and proven true. And since he’s always been a “man’s man” brute with toxic edges she’s sought to smooth out, why not embark on some cheating herself with the embodiment of everything he isn’t?

Enter Stensland (Domhnall Gleeson), an Irish ex-pat caught within a self-diagnosed “early life crisis” who spends his free time lost in thought on the plush upholstery he could never afford inside a local furniture store. He’s sensitive, loquacious, and emotionally unstable. And he shows an interest. Stensland musters the confidence to talk to this older woman who’s way out of his league and Morgan reciprocates. It’s a fateful meeting we eventually hear about but never see, one that’s obviously at the back of the abrupt and loud introduction we’re given to Kevin Tent’s Crash Pad. Stensland didn’t know she was married (for convoluted reasons) and feels like his heart was ripped from his naked body upon her telling him in bed the morning after their second straight sleepover. This type of premise would usually follow Morgan working through her wants and desires to choose between her husband and boyfriend. But screenwriter Jeremy Catalino hasn’t created a “usual” romantic comedy — for better and worse. His lead is actually Stensland and the twenty-nine year old slacker’s numerous neuroses where it comes to love. The roles have been reversed as Morgan is kicking him out, the urge for the revenge sex she sought satiated. Stensland is thus the party scorned and he takes it very hard. The resulting extremely over-the-top reaction is a crude commentary on the “Millennial man” conservative pundits have been quick to joke about fearing if ever a war broke out that pushed him to the front line as soldier. He cries while watching “Dawson’s Creek.”

Is it funny? Sure … at first. In my opinion the sporadic laughter I emitted was less about the premise than the performance, though. This is Domhnall Gleeson after all, an actor known for dramatic gravitas if not sappy sentimentality. Seeing him drawn with the petulance of a five-year old throwing a tantrum and the pretentious onslaught of holier-than-thou dialogue better suited to Chris O’Dowd’s mouth in “The IT Crowd” was therefore incongruous to my expectations. This is neither good nor bad as the surface hilarity works for now despite it always seeming as though Gleeson is “acting.” He’s trying so hard to be “mean” that you can’t help but scoff at the inherent artifice. Stensland is so awkward and self-conscious that he cannot accept his hypersensitive normal. Most projects would focus on this psychological wall and find a way to let Stensland embrace who he is in a public forum. Again, though, Crash Pad isn’t quite “usual.” Rather than coax the bile from this young man’s belly, Catalino looks to first hone it through an unlikely mentor: Grady. Yes, you can pretty much forget about Morgan altogether because her hopes are thrown to the curb as the film moves into buddy comedy territory. She’s actually rendered the villain, the “dragon lady” who has crushed the tiny little hearts of men lured in by her deceit. She’s not, though. They’re merely insecure babies who can’t deal with a strong woman. So Stensland and Grady team up. The latter not giving the former a choice is inconsequential.

A string of party-filled days dripping in alcohol follow as Grady decides to take a vacation from his life to remember the drunken insanity he experienced before settling down with Morgan. Stensland simultaneously has his eyes opened to a hedonistic lifestyle he never embraced while in college because he never wanted it. The next hour becomes a punch line for the joke “A sexist pig and a lightweight dork walk into a bar …” and it’s just as immature and reductive as it sounds. We know Catalino and Tent are working towards a dual epiphany wherein both man-childs learn a valuable lesson about their own masculinity — a lesson about respecting women would be hollow since they obviously don’t — but it being so overt means the wait is excruciating. You can’t end a journey riddled by blatant sexism with forgiveness — especially not in today’s climate wherein women’s voices are finally being heard. A majority of the film is Grady teaching Stensland how to be a misogynist and subsequently showing it works despite his conscience getting in the way. We’re watching two men who were hurt by the same woman taking their anger out on other women for whom they’re willing to do the same. Sorry, but that doesn’t sound like the actions of men we’re supposed to later sympathize with on their road to maturity. Catalino has more or less written an adaptation of Harvey Weinstein’s tone-deaf excuse “I came of age in the 60s and 70s when all the rules about behavior and workplaces were different.”

Sorry boys, but the rules weren’t different. Your conduct was always wrong. And the fact this film shines that behavior in an acceptable light as far as being an outlet when these men’s own shortcomings get them into unpleasant situations is inexcusable. Say it’s all in jest or only included to show how men can change, but I won’t believe it. No matter where Stensland and Grady end up on the moral scale by the end, the film normalizes what they do and hopes we laugh at it because they’re “just being boys.” It’s therefore no surprise that the conclusion sees an out-of-the-blue and unwarranted kiss become the proof that one of these boys became a man. Rather than tear down these masculinity stereotypes, Crash Pad reinforces them.

Crash Pad screened at the Buffalo International Film Festival and opens in limited release on October 27.