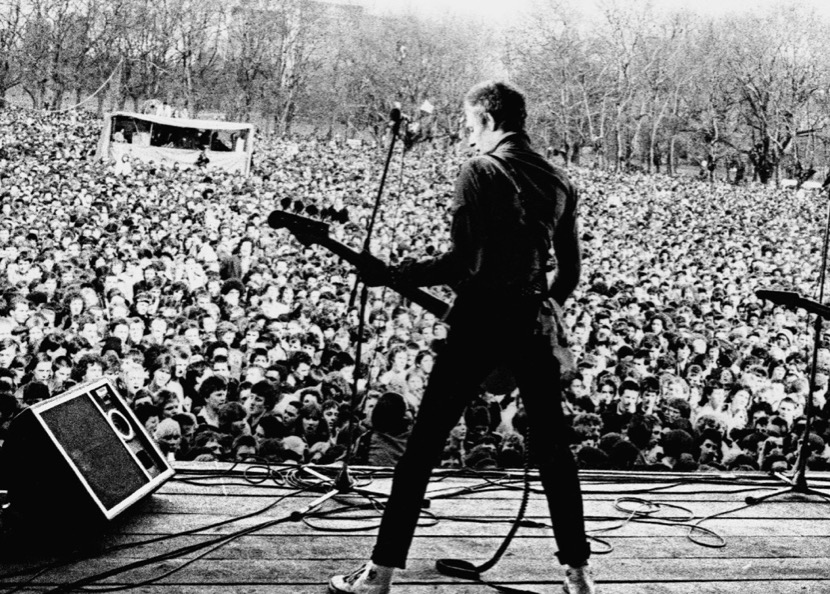 There was a time when it seemed music might have the power to change the world—or at the very least, move the needle. The knee-jerk reaction to such a statement is to think of the protest songs of the 1960s. While that music certainly impacted the zeitgeist, the real sonic boom was caused by a group of artists, activists, and musicians in mid-1970s England. Their efforts led to the birth of Rock Against Racism (RAR), a cultural movement founded to fight back against the brutal, ugly, violent, and pervasive racism of the neo-Nazi organizations like the National Front.

However, as filmmaker Rubika Shah’s thrilling, incendiary documentary White Riot shows, prejudice was not limited to members of the NF. It was ingrained in British society, abetted by law enforcement, and cheerfully brought to TV screens on BBC minstrel shows. “Our job,” explains RAR founder Red Saunders, “was to peel away the Union Jack to reveal the swastika.” The methods were more cultural than political — think concerts and fanzines — and eventually paid off.

The RAR story is well-known to many, and that familiarity will be a negative for those viewers. But for those who may not be steeped in 70s punk history, the effect of seeing this spirit in action is downright inspiring. Making its world premiere at the 2019 BFI London Film Festival and based on her own short film, Shah’s White Riot is a stunning film. The archival footage is often terrifying; seeing legitimately large crowds of NF supporters marching through London is shocking. (It is hard not to wonder where all of these folks are today.) The interviews, with the passionate Saunders and other RAR figureheads, are ever-compelling.

And the music, of course, is glorious—shrapnel-filled punk from the Clash, x-Ray Spex, Tom Robinson, and a fascinating, short-lived Asian punk band called Alien Kulture. Shah’s film opens with violent footage from a Sham 69 gig, and this air of intense provocation exists all through White Riot. Much of this, of course, was due to the existence of the National Front. Graffiti (“IT’S OUR COUNTRY LET’S WIN IT BACK”) was backed by attacks in the street. Even major musicians backed the words of politicians like Enoch Powell; you may never look at Eric Clapton the same way again. It was against this backdrop that Rock Against Racism began. Guerilla-style, hands-on activities were the order of the day, but it was not easy. Saunders and others face death threats as they battled the lingering stench of colonialism.

Those expecting a deep focus on the Clash (based on the film’s title) may be disappointed; Joe Strummer and company are mainly represented near end of White Riot. An RAR concert featuring the band, dubbed the Carnival Against the Nazis, provides Shah’s film with a suitable ending. It began with a thousands-strong march starting at Trafalgar Square, and closed with a concert at Victoria Park. The march, and the “cacophony of noise” that accompanied it, makes for a joyous conclusion. It’s a reminder of the power of positive energy in the face of racial division, and a suitable middle-finger to the politicians and everyday racists who still haunt the land.

What’s most unsettling and provocative about White Riot is how current it feels. Because of this, perhaps White Riot’s greatest achievement is that it takes something that can cause sneers and eye-rolling—committed cultural and political action—and make it feel both necessary and triumphant. As Saunders states at film’s end, one of the messages of Rock Against Racism was its lesson for “ordinary people.” It showed that “we can do things,” Saunders says. “We can change the world.” It’s a wondrous thought. And Rubika Shah’s White Riot shows that it is, indeed, possible.