Berlin Review: The American Sector Explores the Symbolic Resonance of the Berlin Wall 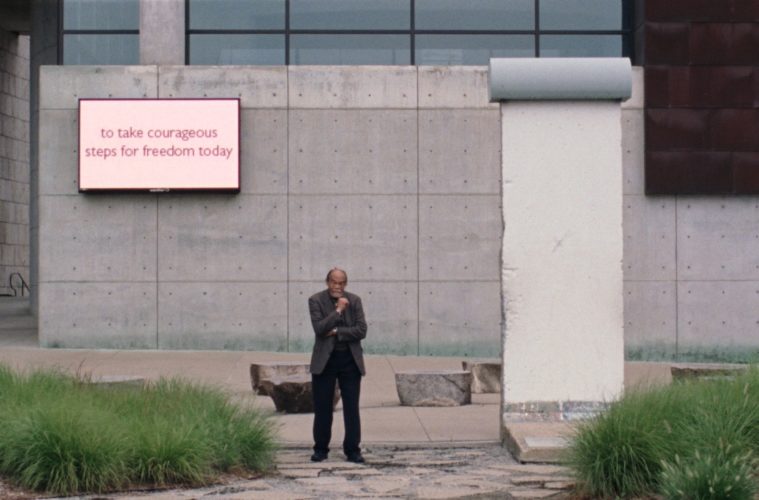 Courtney Stephens and Pacho Velez’s documentary The American Sector announces its intentions from the very beginning, starting with its first three juxtaposed images. The first is of what appears to be a nondescript block of concrete, with splattered paint and a caterpillar crawling upon it; the second reveals the block to be a segment of the Berlin Wall in a large forest–specified in the chyrons as unincorporated land in Western Pennsylvania–with the sound of chainsaws off-camera; the third suddenly jumps to a much different, more sterile setting: the Hilton Hotel in Dallas, Texas, where two sections of the Wall have been installed. Aside from brief interviews, a few instances of archival footage, and an epigraph from “The Monument” by poet Elizabeth Bishop, this deliberate foregrounding of incongruity in both specific and relative location created by editing is all the contextualization that the documentary provides, or needs.

As might be surmised from this opening volley and the title, the documentary concerns itself solely with depicting over sixty segments of the Berlin Wall that are currently in the United States, covering the breadth of the contiguous 48 states and capturing nearly every segment, though some were shot and not used. What is used comes from a motley assortment of locations, to say the least: presidential libraries, subway stations, private neighborhoods, museums, and so on. In a manner similar to one of Velez’s previous films, the masterful Manakamana (2013, co-directed with Stephanie Spray), this concept is never explicitly mentioned, aside from a few off-hand comments by Stephens during interviews. The effect, especially over the short 70-minute runtime, is first and foremost of a pleasurable, experiential nature: shot in grainy 16mm, the variance in graffitied designs lend enough difference to please the eye, as do the changing surroundings in which these slabs are placed.

Of course, however, there is a wider political context that this film necessarily places itself into. First, there is the very existence and aftermath of the Berlin Wall, which in its intact form represented division and, at least from the vantage point of many Americans, Communist oppression, easily visualized in a way that, say, Reagan conservatism (the subject of Velez’s previous 2017 documentary The Reagan Show) was not. After it was dismantled, the number of meanings in America alone seem to have multiplied, as suggested by the myriad interviews with curators, artists, store owners, and even random passers-by.

It is in these short dialogues, though well-represented with a conscious use of unsynched voiceover, that The American Sector becomes perhaps too blunt for its own good, openly invoking topics like the present political situation at the USA-Mexico border in a way that feels out of place with the carefully chosen and slightly rigorous nature of the (mostly) uninflected images. Some moments of directness do resonate, however: two students at the University of Virginia openly questioning the prominence of three glass-housed segments on campus, while a tribute to the slaves used is relegated to a single brick on a pathway; a request for filming the segment in the CIA building that is rejected by a phone call over a black screen. More than anything, The American Sector is able to contain and reflect back a certain state of being in present-day America. Of course, all is not well, not even in the spaces depicted: the Newseum which housed the largest section of the Wall outside Germany, closed at the end of last year, with its next location unknown. But in the severe contrasts, the disparities between those who can afford to house a fragment in their private residence in the Hollywood Hills and the masses who walk by a segment on a busy city street, Stephens and Velez understand that the Wall carries its own resonances from place to place, a divided construct that nevertheless connects across space and experience, for better and for worse.

The American Sector premiered at the Berlin International Film Festival.