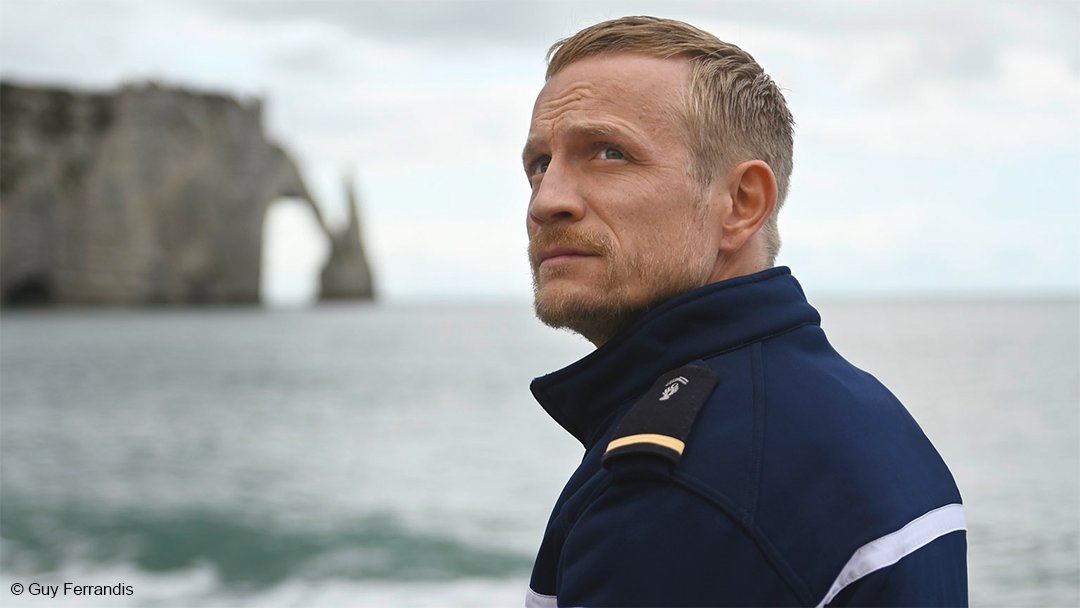 With Drift Away, director Xavier Beauvois––known internationally for his masterful monastery-set Of Gods and Men––juxtaposes the picturesque scenery of northern France with a policeman’s inner turmoil, and the community’s social unrest lying beneath the surface, in an intriguing if frustrating policier.

Jérémie Renier plays Laurent, a police officer in Normandy, and sturdy figurehead of the community, soon to be married to his long-term girlfriend Marie (co-writer Marie-Julie Maille). We ride along with the veteran member of the Gendarmerie’s tight-knit team, including Laurent’s partner Quentin (Victor Belmondo, grandson of Jean-Paul) and principled new recruit Carole (Iris Bry) as they patrol the area. Countryside disputes and drunk bar patrons (including director Beavois in a blink-and-you’ll-miss-it cameo) paint a documentary-like picture of small-town life.

But it’s not just a rustic slice of France’s profonde. The area’s picturesque white cliffs overlooking the Atlantic are a regular spot for suicides, and an ongoing case involving child abuse suggests that under the surface there is deep unease in the village.

The French title Albatros, named for a model ship handed down to Laurent by his mother, is bound to evoke the ominous subject of Coleridge’s Ancient Mariner and, as a portent of things to come, in the film’s first sequence a wedding photograph is cruelly interrupted by a man throwing himself from the cliffs. Is that an omen for Laurent’s own upcoming nuptials?

Beauvois carefully builds the tension, especially through Renier, recently so good as a predatory ski instructor in Slalom, whose carefully tuned toughness almost imperceptivity unravels. He’s headstrong, sure of himself, until quite suddenly that self-confidence on which he built his identity collapses.

Laurent’s friend Julien, a farmer struggling under debts and railing against bureaucratic rules on keeping his cattle, makes a run for it from the authorities, armed with his hunting rifle. When the police catch up, Julien points the gun at his own head. Laurent makes a split-second decision, aiming a non-lethal shot to try and prevent Julien pulling the trigger. But things don’t go to plan and the consequences shatter the community.

Beauvois doesn’t portray an explosive reaction to the tragedy, but undercurrents simmering beneath the soil of this tight-knit society starting to boil over. Julien’s desperate plight is pounced upon by the Farmers’ Union, which uses it to prop up its nationalistic agenda, saying that the real perpetrator is the burden of rules and regulations stemming from the European Union, Beauvois likely tapping into political ruptures pulsating through France raised by the Gilets Jaunes movement.

Yet with headlines throughout 2020 of police brutality, especially in the United States, Beauvois is more on-side with the police than we might expect. Perhaps in France, where gun violence counts for a fraction of crimes compared with the US, Beauvois is less concerned with trigger-happy cops and more with what happens when principled actions go awry.

Laurent urges for an escape from his trauma. In the film’s final act, the rigorous, authentic feel of land, as the title dictates, drifts away. It’s a strange finale, unmoored from the rest of the film, as if the director is unwilling or unable to answer the questions posed by the first half of the movie. Xavier Beauvois has made a film that contemplates trauma of one’s own making, a perceptive work that grapples with guilt and grief.