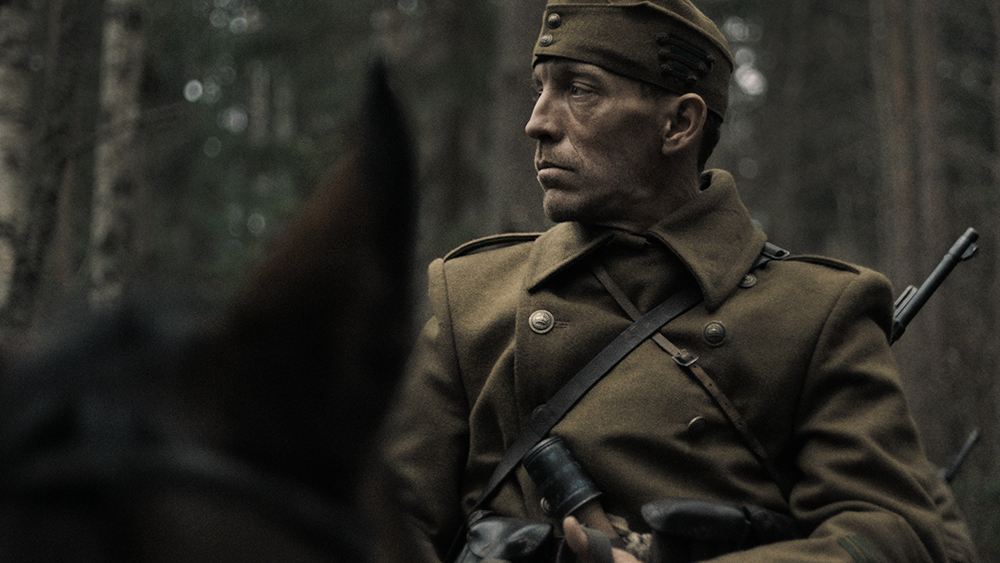 For his first narrative feature Natural Light, Hungarian filmmaker Dénes Nagy (who has worked in documentary since as far back as 2008) follows in the footsteps of a fellow countryman. In 2015, László Nemes debuted Son of Saul at the Cannes film festival. A deeply serious film, Saul sought to plunge viewers into the horrors of Auschwitz. Nagy’s film takes place a little earlier, and a good bit further to the East, following a squadron of Hungarian soldiers on the Eastern front. The men are there to serve on the side of the Nazis-––although hunger, mud, and sanity seem to be the more pressing concerns.

The nod to Nemes is less to do with having been born in the same part of the world, of course, as it is to do with subject and style––although the two are not necessarily unrelated. It’s also to do with a relatively new filmmaker having the temerity to tackle something so monolithic as the Second World War––not to mention a particular moment that lives their country’s collective memory. All of which is to say that Natural Light is not for the faint of heart: an oppressively bleak piece of filmmaking that, even at a surprisingly brisk 103 minutes, takes a toll.

I’m aware these comparisons are exhausting, but it’s difficult not to draw a line from Elem Klimov’s Come and See (1985) through Son of Saul and The Painted Bird (2019), up to this debut full of similarly ashen-faced characters on the Eastern Front. Nagy’s film unapologetically lives in that lineage, even gesturing back to Klimov in a crucial moment late on. The dialogue is just as scant here and, like its forbearers, our guide through Nagy’s world is the archetypal blank survivor: seemingly all-seeing but largely mute, and slowly dying for others’ sins. The flickers of emotion we do see appear almost like a muscle memory, some echo of a distant past. Nagy’s film is about a man trying to cling on to that past (at one point he’s seen palming a monogrammed handkerchief as if it were his rosary beads or an alien artifact). The character’s name is Semetka (played well by Ferenc Szabó), a corporal whose unit is tasked with the utterly thankless job of rooting out Russian partisans in the occupied Soviet Union.

The story pivots on an ambush that will leave Semetka in command as the squad are held up in a tiny rural village. Here various hellish things unfold––although never quite on screen. Nagy’s work to this point has largely been in solemn, painterly documentaries that focus on rural Hungary (Icon and Relic, Another Hungary) and trauma (Harm), and it’s easy to appreciate how gracefully he’s adapted both the behavioral eye and the aesthetic rigor of those films to a period setting here. It’s evident in Natural Light’s obsession with faces and gestures, its patience, and in the delicacy and abundance of its close-ups. While in production, the director went through a lengthy casting process to find the right non-professional actors to play soldiers who had themselves been plucked from rural areas of Hungary. It’s thus hard to question the reality of much that we are seeing, like the opening sequence in which the men appear to skin and butcher a deer.

As harrowing as it is relentless, Nagy’s film is also one built on sly suggestion and at most we only hear the horrors around Semetka (soldiers pillage, bullets fly, people scream), or witness the immediate aftermath (a young woman putting back on her clothes). The film is more concerned with showing the toll it is taking on Semetka himself––as seen in Szabó’s face. Shot expertly by DP Tamás Dobos, the landscapes are captured with a similar foreboding awe yet, in spite of the film’s title, light is only notable for its near absence. Nagy’s is a story of bleakness, a test of endurance, and a reminder that war is a hell that, atypically, refuses to rely on gratuitousness. And it ultimately, just about, earns that overbearing solemnity.