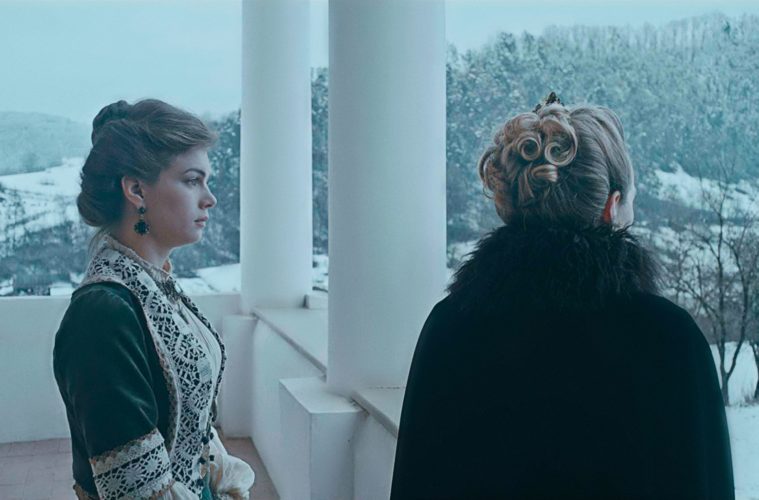 In Malmkrog, a group of Russian aristocrats gather in a grand rural estate to wax philosophical during a long and luxurious dinner party. The film offers seemingly the closest thing to a direct screen staging of Russian philosopher Vladimir Solovyov’s War and Christianity: The Three Conversations. At 200 minutes, it runs just a few breaths short of Stanley Kubrick’s 2001: A Space Odyssey but seldom ever leaves the confines of the decadent surrounding–indeed, the majority takes place in just three rooms. The dialogue sounds as if it has been taken verbatim. The camera hardly moves. We recommend caffeine, or perhaps something stronger.

Malmkrog was directed by Cristi Puiu, a filmmaker of the Romanian New Wave who first appeared on most people’s radars with The Death of Mr. Lazarescu in 2005, a film so vital and urgent it seemed to almost singlehandedly propel Romanian cinema to the top of the game for a while. (It would take only two years for one of Puiu’s compatriots to win the Palme d’Or.) Urgency is no longer on the menu here but it is not as if Malmkrog is out of keeping with the director’s trajectory (Sieranevada, while superior in many ways, was no less of a chamber piece). Puiu splits his latest into five chapters: one is named after the owner of the estate, the landowner Nikolai (Frédéric Schulz-Richard), and the others after his four guests: arrogant mansplaining Edoard (Ugo Broussot); impassioned Ingrida (Diana Sakalauskaité); long-suffering Olga (Marina Palii); and Madelaine (Agathe Bosch), the wife of a poorly general who we see in passing. The vast majority of the film functions as a hypnotic if frankly monotonous dialectic (ruminations on Christ, honor, “we were just following orders,” war, love etc. that become more heated as time goes on) that is assured to alienate most anyone without a minor in philosophy or the vocabulary of academic text.

By budgetary restrictions or design, Puiu leans heavily into the fundamental and cerebral pleasures of slow cinema: limited cuts; long takes; and that strange sense of Stockholm Syndrome that seeps in after sitting with a bunch of strangers for so long. It may take hours or even days but eventually something does click here. While offering up what he believes to be an important text, Puiu’s film also works to show the pace of this life, with all its customs and rituals, and it is a wonder to watch on as day slips into night in the gorgeous surroundings; the guests easing into each others company with each passing course and glass of wine–even as the conversation coursens (the cast’s dedication, we should note, is a marvel throughout). This pacing allows the viewer all the time in the world to examine Puiu’s intricate period details. Much of this is simply beautiful–all gesture, costumes, and candlelight–but the filmmaker also appears to have gone to pains to show the unspoken customs of Nickolai’s servants, who operate in near silence as they serve dish after dish to his, at best, disinterested and, at worst, dispising guests. The contrast between the dinner guests’ pompous worldliness and their treatment of those less privileged does not go unnoticed.

It is often grindingly infuriating and we can safely say this will not be to everyone’s tastes–the copious walkouts during the press screening at the Berlin Film Festival can attest to that. Even by design, Malmkrog smacks of just about as much elitism as the privileged it portrays and yet this may in fact be the point. There are, for instance, glimmers of the absurd on show that bring what would otherwise be alien films to mind (The Discreet Charms of the Bourgeoisie, for one) and I couldn’t help my mind from wandering to the work of Albert Serra and even to Jean Renoir’s Rules of The Game–admittedly differing filmmakers, but ones that wished to show the eve of the decimation of a certain aristocratic class. Puiu offers a number of surrealist wake up calls for the viewer throughout his boldly uncompromising film: a woman’s collapse; a slap on the face; the rumble of approaching war. It is the last of these that reveals the most about his oblivious, pontificating, privileged characters. It may even make Malmkrog worthy of your time.