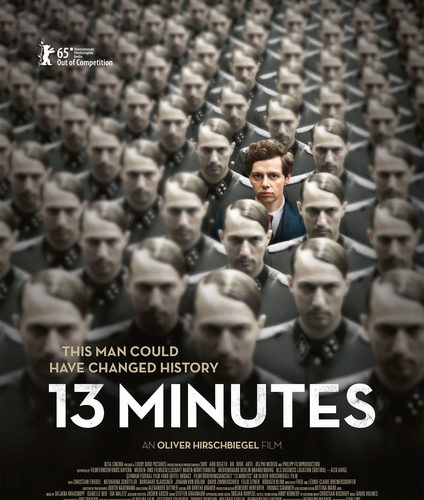 On the 8th November 1939, two months after the start of World War II, the German carpenter Georg Elser (Christian Friedel) carried out an assassination attempt against Adolf Hitler by planting a time bomb in a Munich beer hall where Hitler was scheduled to hold a speech. The title of Oliver Hirschbiegel’s 13 Minutes refers to the interval between Hitler’s premature departure from the hall and the subsequent detonation of the bomb, which destroyed the building and claimed several lives without killing its target. Following 2004’s Downfall, this is Hirschbiegel’s second film to address the most problematic chapter in his country’s history. Shedding little light on the circumstances of Elser’s failed attempt and even less on the broader history that surrounds it, 13 Minutes presents a redundant historical “what if” that leaves itself open to charges of relativization.

To its credit, 13 Minutes does not use the bombing as the narrative centerpiece. Rather, its failure is depicted in the first scene and the rest of the film alternates between Elser’s interrogation and torture following his arrest and his life in the prewar years. Introducing the blunt and sentimental style that will dominate the film, the period preceding the Nazis’ rise to power is rendered as a cloying idyll, where the young Elser and his friends spend carefree days swimming in picturesque lakes, lounging in the sun, courting pretty girls and dancing with them to the rustic sounds of the accordion. At regular intervals, the film cuts to 1939, inevitably on a shot of Elser’s increasingly mangled face, underlining the idyll’s gradual destruction.

Granting strictly superficial insight into Elser’s actions and motivations, the interrogation scenes primarily serve to emphasize Elser’s heroism and fulfill the sensationalist requirement of juicy torture sequences (whose realism is then negated through missteps such as having Elser retort with sarcastic quips even after his nails have been ripped out). Additionally, they also instill humanity in the Nazi characters. The stenographer (Lissy Pernthaler) is a young woman sickened by Elser’s mistreatment and his chief interrogator, the SS officer Arthur Nebe (Burghart Klaußner), is portrayed as sensible and trying to help Elser minimize his suffering (Nebe’s involvement in the 1944 plot against Hitler receives mention in the film’s epilogue). These characters stand in contrast to that of the Gestapo officer Heinrich Müller (Johann von Bülow), a raving, dogma-spewing fanatic who despite all proof to the contrary refuses to believe that Elser didn’t have accomplices and orders his continued torture, once bashing his face into a bloody pulp mid-confession. Through such overt juxtaposition, Hirschbiegel rehashes the worn simplification that the horrors of Nazism were the responsibility of a few psychopaths.

Although handsomely recreated, the prewar era is treated no more perceptively. The focus is on Elser’s relationship with Elsa Härlen (Katharina Schüttler), a woman married to a brutish Nazi sympathizer, while in the background the blossoming of National Socialism is registered through the customary historical signifiers. Amongst these, the Holocaust is given the most cursory treatment. The only direct manifestation of Jewish persecution is a scene depicting a German woman beaten and holding a sign shaming her for engaging in sexual relations with a Jew. The hardships faced by Germans who refused to support the Nazis, on the other hand, are evoked again and again. Elser is handicapped in his quest to find work and can’t benefit from the subsidized housing offered to party members, thwarting his aspirations of a future with Elsa. His Communist friends are harassed, beaten and finally locked up in forced labor camps. When an extermination camp, Dachau, is shown in the film’s closing minutes, the only inmate we see is Elser, having spent the war incarcerated until his execution just before the camp’s liberation by the US Army.

13 Minutes’ closing titles explain that following the war, Elser remained an unknown and that it took decades for his courageous actions to receive their due recognition. While this is largely true, it’s not exactly breaking news. Elser has been reinstated in the history books for some two decades and is celebrated as a resistance hero in Germany, begging the question: aside from Elser’s historical status, what is the film insisting we reconsider?

13 Minutes premiered at Berlin Film Festival and will be released by Sony Pictures Classics on June 30.