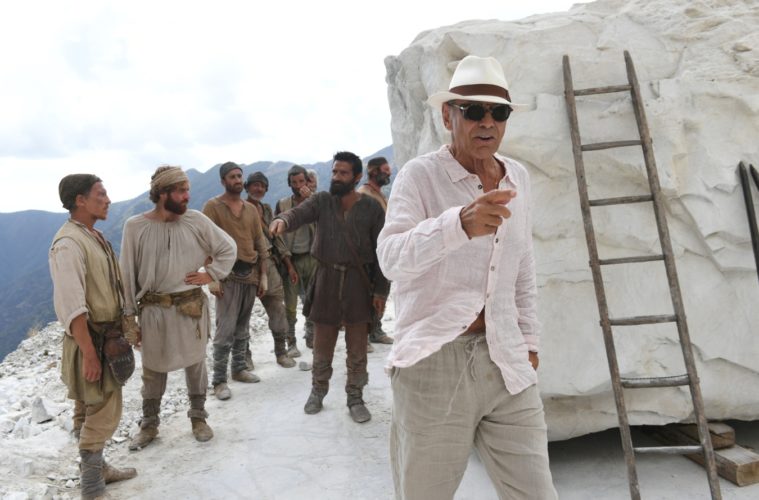 Midway through our chat, Andrei Konchalovsky squints at his coffee and takes a brief pause. We’re in the restaurant of a cozy boutique hotel in Tallinn, Estonia. The restaurant is in the hotel’s basement floor; the 14th-century walls give the room a cave-like feeling, and a log fire sizzles behind our backs. Aside from us, the place is empty. Konchalovsky arrived in Tallinn to pick up a lifetime achievement at the 23rd Black Nights Film Festival (PÖFF), and to present his latest directorial effort, Sin, a portrait of Renaissance master Michelangelo Buonarroti, the sculptor, painter, architect, and poet behind such masterpieces as La Pietà, David, and the frescoes of the Sistine Chapel. Sin came out three years after Paradise, Konchalovsky’s 2016 Holocaust drama, which earned the Russian a Silver Lion for best directing at the 73rd Venice Film Festival (the same accolade he nabbed just two years before with The Postman’s White Nights, curiously).

Like Andrei Rublev (1969), a somber epic of Russia’s greatest icon painter which Konchalovsky co-wrote with writer-director Tarkovsky, Sin follows an artist who’s never shown painting–or sculpting, for that matter. It unfurls as a study of a man struggling to reach the sublime while navigating a world riddled with conflict and misery. Nothing close to the violence that surfaced in Andrei Rublev, to be sure: in Sin, the conflict pivots by and large on the feuds between the Della Rovere and Medici families, rival clans who fought over Rome and Michelangelo’s loyalty. But there is also a deep spiritual conflict undergirding the drama, of a man struggling to find redemption through art, haunted by fame, deadlines, and moral failings.

An $18.8 million production (70% of which financed by Russian tycoon and general producer Alisher Usmanov), Sin does not have the looks of a grand, large-scale epic–another point that makes comparisons with the majestic Andrei Rublev somewhat tenuous. Instead, it offers a far more intimate a character study centered on the lead performance by Alberto Testone, and thriving on the physicality of Michelangelo’s artistic struggles. Somewhat evasive about the reasons that drew him to the Renaissance master, Konchalovsky told me plenty about the timeless legacy of Andrei Rublev, his collaboration with Tarkovsky, and the Middle Ages substance-induced and free-floating narrative genre that Sin drew inspiration from.

Was there anything in particular about Michelangelo’s life that drew you to this project?

I fear I don’t really have an answer to that. You’re asking me why Michelangelo, and I guess I’d answer: why not? That’s it. I mean, it could have been Leonardo Da Vinci, Giordano Bruno, or any other master we remember from the past. But it was just because we remember his name. Nothing else. You and I may have a certain association with his art. And the younger generations might have another one with the Ninja Turtles.

You see, I was asking because as I was watching Sin I thought back to Andrei Rublev, and I remember–

Have you seen Andrei Rublev?

Last time I did was last year.

Last year? So you’ve seen it because you were curious?

Thank you. See, I was thinking about Andrei Rublev because I remember an interview where Tarkovsky claimed that “an artist is society’s conscience,” and I was wondering whether the same statement rang true to you as you approached Michelangelo.

(Pause). I think you’re trying to find the logic of the film here. And that’s fine. Everyone does. Films are part of life, and you try to find the logic in them. But I don’t really think it’s that important, who I’m reflecting here. It could have been Michelangelo, or anyone else. Someone who was also trying to resist some temptation, say. Someone cursed by fear of death, cursed by fear of hunger, and humiliation. Nothing else. And it doesn’t matter if it’s a genius like Michelangelo or some completely unknown slave. The fear is the same. That means my answer to your question is: I’m not trying to identify with anyone, or tell something special, or try to analyze or reflect on the nature between an artist and society. Of course, that may happen. It’s just human stories, after all. And the more human they are, the more universal. And when Tarkovsky was saying those things about the artist’s role…(pauses).

Would you disagree with his take?

Well, Andrei was a naive person. Very naive. He was a childish person. Very frail. And I would say his mentality was closer to a 19th-century artist like Rilke, or Nietzsche. Or at any rate, someone who’d think of artists as people who served as prophetic symbols of society. In a sense, I’m more real. I think that either you have talent or you don’t, and as artists you reflect on the human condition. Some of our pieces–not the artists, their pieces – might be lucky enough to get out there, and reach the public. Some others may be less successful. It doesn’t mean they are not masterpieces. I know I’m trying to lower the level of our discussion here, but… (pauses). We live in very difficult times. When we say contemporary man, who do we mean? A person who lives in Central Africa and doesn’t have enough water to drink? Does he understand what cinematography is, what art is? Does he need it? Indigenous people in the Amazon–they’re contemporary people too, like us. So, in that sense, we are lucky, you and me, that we can understand certain cultural associations we refer to as European art. But even European art is just a small portion of world art at large. And cultural association remains a privilege. It means you are in a position of privilege to remember certain things that we can associate with.

What you just said about the universality of human stories reminded me of an exchange between Dante and Michelangelo, at the very end of Sin, when Michelangelo confesses that his quest for the divine only drew him closer to mankind. It taps on the religious dimension of Michelangelo’s pursuit, and of Sin, too. There were moments when the epic looked like “The Passion of Michelangelo,” and I was wondering how significant a role this spiritual aspect played as you first approached the script.

I guess I still don’t quite know who will be reading our conversation. Discussions about certain things are, it seems to me, a little futile. That’s why Dante, at the end of Sin, only tells Michelangelo one word.

Exactly. And that would be my answer, too. Listen. Because, as one of the most interesting philosophers working today, John Gray, once said about the meaning of life: maybe the purpose is just to hear and see.

Reading about Sin, I was fascinated by your description of the film’s structure. You said it’s premised on a Middle Ages narrative form known as “visions.” I’d never heard of it before.

Oh, yes, that’s very interesting. You know, when I was reading books and gathering material about Michelangelo’s period, I read a lot about his fascination with Dante. Of course, I’d heard about Dante before, but it was then I began thinking about this idea of vision. Now, vision was a genre known before Dante’s times, from the 11th century or so. Basically, it was writers–and by writers I mean religious people, like monks or hermits–eating mushrooms or other substances or just drinking wine or fasting for several days as a way to induce certain hallucinations, visions, and dreams. Which they would then put on paper as fantasies. It’s a genre that’s completely free from form. And Dante basically elaborated his own fantasies based on his political and religious convictions. He put them in the genre of vision, freeing himself from any obligations. So I was thinking, I cannot make a biography. Firstly because a biography is boring: born, worked, suffered, died. I was following the steps of those people, trying to free myself from certain obligations. But you cannot make a fantasy about Michelangelo, because his life is very well documented. There were books written about him.

His contemporary, Giorgio Vasari, dedicated him a whole chapter in his book Lives of the Most Excellent Painters, Sculptors, and Architects. And I think Michelangelo was one of the first artists who had a biography published while still alive?

That’s right. And the letters he wrote. And his bills. There’s an author who put it all together, a massive book listing all his receipts, all the stuff he bought, and how much he spent. It’s incredible. It’s all so well documented that you cannot make up a fantasy like we did with Rublev. There were very few documents about Rublev’s life. We were very free. And we made some… big mistakes in that film.

Well, for one thing, Tartars [which in Andrei Rublev are seen ransacking a church and exterminating those who seek refuge inside it, including women and children] never ruined any churches. They were very, very careful when it came to that. Sure, they might have been invaders, but never ruined or stormed sacred spaces of opposite religions. But back then, Tarkovsky and I were thinking about Tartars solely as invaders. I know, it’s not important anymore. But I still feel a little guilty about that. I feel sorrow… (pauses) Anyway. When I was writing about Michelangelo, history was important, and to that extent, I was a little hostage. I felt like a pawn. Because I could not lie about historical facts. The question then was: how do you select, and reduce certain points without lying or distorting facts, but leaving the ground open for allegorical metaphors about the life of an artist called Michelangelo? I put everything into five extraordinary years where he’s supposed to be out there making sculptures, and elaborate on them. That’s why it’s not a biography. It’s the story of a character who had a certain genius. But it’s not about his genius either. It’s about a period of his life, not about his art. They say you can tell a person’s health from a single drop of their blood–or that in a drop of water, you can see which ocean it came from.