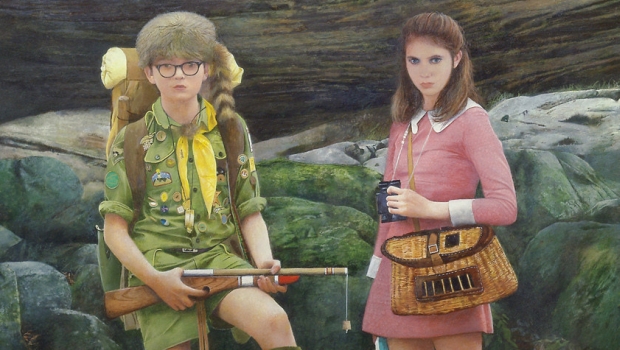 Wes Anderson‘s new film, Moonrise Kingdom, has only been out for a week — and only in a pretty select capacity, to boot — yet the director’s got something else from this world on the way, having announced that, sometime in the next week, he’ll release a new animated short telling the story found in one of his characters’ favorite books.

As previously mentioned, the film focuses on a pair of star-crossed children (Jared Gilman and Kara Hayward) who fall hopelessly in love and defy their elders by running away to New England (if you haven’t yet, check out Raffi‘s excellent Cannes review here). Every Anderson character has their unique traits and, for Suzy, it’s her book-filled suitcase. Now, he plans to introduce his audience to the story inside one of those books.

Anderson, on his upcoming short (via ComingSoon):

“[The character of Suzy has] a suitcase full of these young adult fantasy type novels […] Sort of sci-fi/fantasy books. We had to invent them and give a little glimpse of each one. Different artists, most of whom very close to the filmmakers, were doing these. In fact, we have now animated them, each little passage, each in the style of the cover of the book. We’ve made a little short film that’s hosted by Bob Balaban, the narrator in our movie. That will come out next week on the internet. It’ll be a little companion piece to the movie.”

I have always been fascinated by the small details in his films. The flea market knick-knacks littering a family room, the comic books on a child’s bedside table, the colorful scarves around the heroine’s neck — what makes up a life and a world, the details that make a character that much more real to us. With that in mind, Anderson‘s idea of telling the tale inside the tale sounds nothing short of (ahem) fantastic to me. Animating one of Suzy’s books sounds like a great way to help us understand and connect with the character and with the child in all of us, as well as just an excellent excuse to see some more of his animated work.

Fantastic Mr. Fox, after all, proved that Anderson has a serious talent for combining animation with his signature quirks. Furthermore, Hotel Chevalier, the fantastic supplement to The Darjeeling Limited, helped display his prowess at using short films to further develop the stories of his feature length outings. So, all in all, this sounds like an amazing idea. No word on where the new short will debut, but it sounds like it’ll make a great addition to the internet presence already provided by the magical, interactive official website.

Would you want more of the world presented in Moonrise Kingdom? Is this a good way to bring it about?