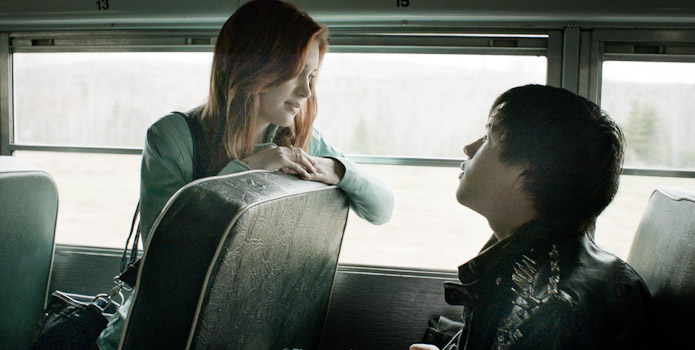 Trailer For TIFF Winner ‘Blackbird’ Follows a Teen In Trouble Writer/director Jason Buxton‘s Blackbird left TIFF 2012 with the Best Canadian First Feature Film award alongside Brandon Cronenberg‘s Antiviral. While the latter film has already begun hitting a select few cities in the States, the former commences its tour of Canada next month before hopefully venturing south.

The film follows a troubled teen named Sean Randall (Falling Skies actor Connor Jessup), falsely accused of planning a Columbine-esque incident after befriending a teenage girl leads to her boyfriend turning violently jealous. Looking to protect himself, Sean publishes a death threat online along with a “revenge plan” to target more kids at the school who have tormented him. An arrest comes swiftly and the police discover an arsenal of weapons owned by his father during a raid.

Having to endure one of the toughest youth prisons in the country, Sean faces even more abuse inside before the decision to plead guilty and get released on time served arrives. Heading home to prove his innocence, he’ll need much more than an altered image and demeanor to overcome the label of psychopath.

As Blackbird‘s website synopsis ends: it is a film that explores the power, and the danger, of social media and cyber-bullying, while showing that the worst prisons are often the ones we create for ourselves. Does this preview spark your interest to seek the film out?