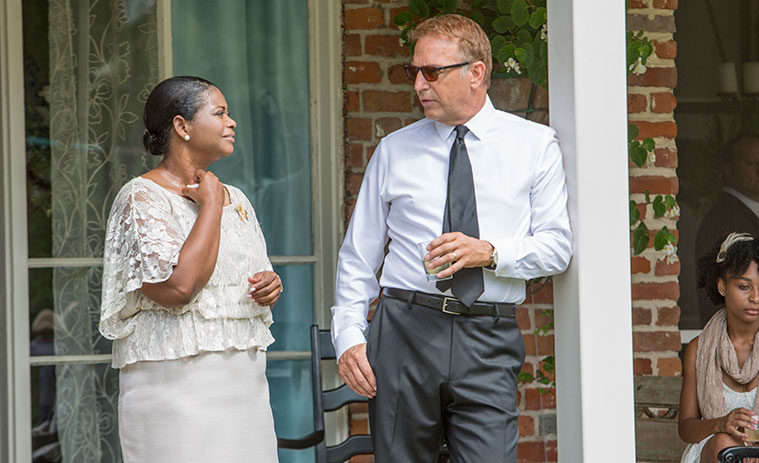 Ahead of a TIFF premiere, the first trailer for Black and White has arrived, which highlights the issues of race and prejudice within a family unit. The drama follows Elliot Anderson (Kevin Costner, reteaming with director Mike Binder after 2005’s The Upside of Anger) who is entwined in a custody battle against Rowena (Octavia Spencer) over his biracial granddaughter, Eloise (Jillian Estel) after both his wife and daughter die.

With two Academy Award winners in the leading roles, Black and White looks as though it will eloquently address modern day prejudices through open conversation about race. In the trailer, both Rowena and Elliot touch on the subject as part of the custody battle over Eloise. It even seems to well-emphasize a clear division between races through family groups. Marking Binder’s first project as both director and writer since Reign Over Me in 2007, check out the trailer below for the film also starring Andre Holland, Anthony Mackie, Bill Burr, David Jensen, Gillian Jacobs, Indigo, Jennifer Ehle, and Mpho Koaho.

Black and White examines the subject of race with rare candour, intelligence, and an open heart. Eschewing sensationalism in favour of psychological honesty, it locates its racially charged tensions not in the realms of crime or politics but rather within a single family. And with a child’s welfare at the core of its conflict, the stakes couldn’t be higher.

Having already mourned the death of his daughter, Los Angeles attorney Elliot Anderson (Academy Award-winner Kevin Costner) is dealt a staggering blow when his beloved wife is killed in a car crash. Elliot had been raising his biracial granddaughter Eloise (Jillian Estell) with his wife, and now, in the midst of his terrible grief, he’s blindsided with a custody suit: Eloise’s African-American grandmother, Rowena (Academy Award-winner Octavia Spencer), is demanding that Eloise be placed in the care of her father, a reckless drug addict whom Elliot still holds partly responsible for his daughter’s demise.

Written and directed by Mike Binder (Reign Over Me, The Upside of Anger), Black and White brings great sensitivity and wisdom to a volatile scenario. The fierce custody battle causes long-buried presumptions and prejudices to come bursting to the surface, but these eruptions help to open conversation, not bring it to a halt. Though feelings of sorrow and rage compete for dominance, love above all is what’s needed if Eloise’s future is to be secured.

Binder’s film explores what continues to be a great taboo in American life, and in doing so proves beyond a shadow of a doubt that matters of race are anything but black and white.

Black and White premieres at TIFF.