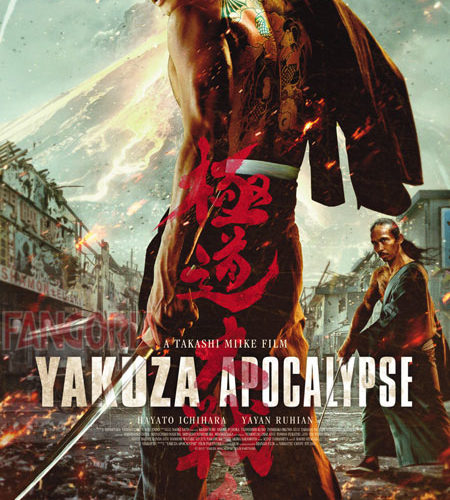 Something is off within the opening minutes of our Yakuza tale as heavy doses of computer-generated bloodshed elevate the proceedings to, in perhaps an understatement of all things, the ridiculous. Furthermore, our hero is Kageyama, a young gang member who doesn’t quite fit into the Yakuza lifestyle, his skin of course too sensitive for the trademark tattoo. But everything comes together once he finds his true calling: bitten by the decapitated (!) head of his fallen Yakuza boss, Kamiura, and thus turned into a near-invincible vampire, thus sent on a path of revenge on rival gangs that finally justifies the violence he’s always been wanting to enact.

There’s a natural — and surprisingly unexplored in the history of cinema, aside from maybe John Landis’ long-forgotten Innocent Blood — match between the gangster and the vampire film, as both are often reflections on gender identity. The codes and posturing of the former point to the mask of masculinity, and the transference and transformation of the latter (while often very flexible in meaning) are frequently interpreted as having something to do with sexual awakening or queerness. Kageyama’s newfound vampirism seems more like a form of hyper-masculinity, yet the gag of the Yakuza tattoo magically appearing on Kageyama’s back right after his transformation (probably the best acknowledgment of the inherent pageantry to a world built on being a tough guy) sets the tone at a joyful ribbing of the conventions — if at least somewhat in spirit, but not completely execution.

Despite many of them being wonderful, Takashi Miike’s films have a tendency of overstaying their welcome (his favourite runtime: 129 minutes), and Yakuza Apocalypse isn’t necessarily an exception to this. Its subtle victory (though maybe its central weakness as well) is its denial of quick, easy fanboy pleasures. While on paper seeming like the Takashi Miike-est Takashi Miike film ever, it might be a surprising bummer for the Midnight Madness crowd expecting a kinetic horror-action film. Every shot lasts far longer than expected and with little to no music, creating a stream of silence followed by a burst of action rhythmic pattern. Assured action filmmaking, yes, but inevitably feeling few and far between. At this point, it seems like Sion Sono is the director people think Takashi Miike is, and Miike who people think Sono is. Why Don’t You Play in Hell? and Tokyo Tribe are the abrasive, exhausting genre exercises, while Miike is the more classical, patient counterpart whose films belong to the “arty genre film” tradition. While Yakuza Apocalypse isn’t necessarily a case of portent, perhaps he’s the only living filmmaker who could show some formal restraint while shooting a scene of a man in a frog suit kicking ass.

The picture is somewhat encapsulated in an almost-agonizing final fight scene, in which two men barely trade blows but rather grind to an almost perpetual tie. Maybe this doesn’t just represent the film’s attitude towards dead-end masculinity, but its own place within a genre canon: at a standstill of requirements to the grindhouse and the arthouse. Yet nevertheless we can still grant the excuse that, despite his prolific nature, Miike still consistently produces work unlike anything else on the festival circuit.

Yakuza Apocalypse premiered at TIFF and will be released in the U.S. by Samuel Goldwyn Films on October 9th.