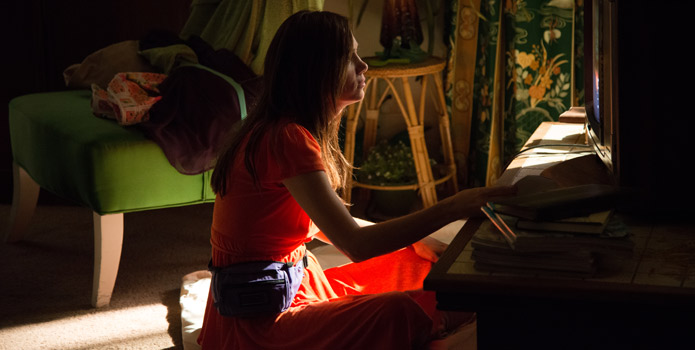 [TIFF Review] Welcome to Me

There’s a great reference in Welcome to Me about Cindy Sherman that many may gloss over. Director Shira Piven and screenwriter Eliot Laurence made mention to Network and The Truman Show during their Q&A after my TIFF screening, but I don’t think such comparisons hold a candle to Sherman’s photography, challenging audiences with staged depictions of women in society and the media. In them the artist made herself up to be the subject rather than a model or community figure aligned with her concept. The film’s lead character Alice (Kristen Wiig) does a similar thing with mental illness. Throwing taboo to the wind for a portrayal both impossible to laugh at and easy to laugh with, Wiig gives us a sad, broken soul caught in the throes of an emotional tailspin on the cusp of crashing and burning.

Afflicted by borderline personality disorder, Alice goes from isolation in an apartment that has had the television on for eleven straight years to winning eighty-six million dollars in the lottery. She tells her psychiatrist (Tim Robbins) that she is going to go off her meds to embrace a protein-rich diet she now can afford, moves into a casino hotel room for the lap of luxury, and decides to make like her idol Oprah Winfrey and start a late night talk show amidst the never-ending infomercials running for cheap. It’s this opportunity to talk freely about herself for an hour without censor–she’s footing the bill and in turn helping keep the studio owned by James Marsden and Wes Bentley afloat–that allows for the candid depiction of her emotional disorder and the many faces she’s worn over the years attempting to combat it.

The result is the titular Welcome to Me which loosely focuses on topics Alice picks, writes, and casts. A vanity project for anyone else, it becomes a new sort of self-therapy for her at the detriment of all those she cavalierly includes via reenactments or unscripted conversation. It’s therefore a sort of cult curiosity, inspiring nighthawks like a grad student named Rainer (Thomas Mann)–who makes the Sherman connection–to watch. The show gives Alice an outlet that the thousands of people watching can relate to if not visualize for themselves. She wins over some of the studio’s employees, drives more to quit, and ultimately finds herself unable to distinguish the lines delineating privacy and personal boundary until the money and quasi fame make her more alone than ever before. So while we laugh at the innocence and candor at first, her transformation into tragic story becomes almost unbearable to watch. This is what makes it–in director Piven’s words–a “cracked fairy tale.” She’s correct as it is just that, but somewhere in the translation I found myself gasping for air through the transitions. As soon as I got into a groove of laughing, the deep stuff arrived. Once I got used to that, more laughs appeared. There is no consistent middle ground to keep the audience sure-footed as far as how to feel and maybe that’s intentional considering the subject matter. A second viewing may prove fruitful, but as it stands now I can’t say enjoyment ever trumped respect for me, because I definitely have the latter for all involved.

Tackling a subject like this is not something you go into lightly and Laurence made mention that he was inspired by a bout of depression he experienced after the death of a close friend. Questions are posited where exploitation are concerned and some incidents spark conflict towards Alice when she’s literally the only one who doesn’t know any better. That’s no excuse for how she uses friends and enemies from the past and present whether intentionally hurtful or not, though. After all, she’s usually the one left crying. Being in such a self-induced fishbowl makes it hard for sympathy when she has lost the capacity to reciprocate the same back in return. Just because she has no shame doesn’t mean everyone else possesses enough to make up for it.

While the film itself is a very specific property melding a few too many genres in doses rather than all together, no one can question Wiig’s performance or that of her supporting cast. Linda Cardellini stands out due to her proximity to the situation as best friend, confidant, and unwitting subject of TV topics, but Bentley, Joan Cusack, and Marsden also inject comedy and drama to the fold. It’s Wiig who owns every frame and runs the gamut of emotion to lay herself bare physically and psychologically. Her childlike sensibility at the start creates expectations it’s simply another funny role, but when she expands into the meaty stuff you will be stunned. And honestly, the film’s worth a look for that alone.

Welcome to Me premiered at TIFF. See our complete coverage below.