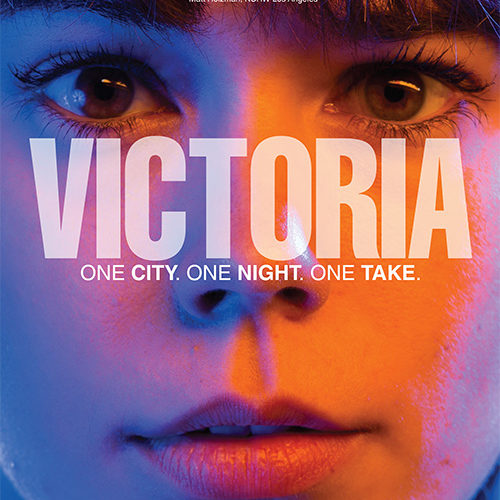 If director/co-writer Sebastian Schipper wanted, he could have easily turned Victoria into a first-person adventure through the streets of Berlin. It practically is already considering cinematographer Sturla Brandth Grøvlen follows behind the filmmaker’s main quartet for the entire two-hour, eighteen-minute single shot. Unlike allowing its characters to turn towards the camera and speak to us like Man Bites Dog or What We Do In the Shadows, this thriller isn’t satirical or comedic. Rather than be explicitly involved in the whirlwind evening full of passion and fear as commentary, we’re implicitly floating nearby with front row access to a darkly unpredictable drama. The one-take construction is for our benefit, but our involvement is secondary to the star. Lingering on Laia Costa‘s titular Spaniard, we quickly parallel her unawareness of what’s to come and excitement at its endless possibilities.

Beginning with an unbridled adrenaline rush of house music and jumping silhouettes within a hazy glow—epileptics beware—it all initially seems so harmless. Victoria’s on a self-prescribed sabbatical from her perfect life in Madrid, letting loose and embracing a newly unencumbered existence after a failed career track she devoted sixteen years towards sinks in. An evening dancing, drinking, and flirting with the barkeep is just what the doctor ordered, her minimum-wage job at the corner café hardly important enough to require more than a two-hour catnap before opening the doors. Where her attempts at romance failed inside, a charming local captures her attention trying to joke his way through the bouncer. Still awake and willing to enjoy more fun before the sun rises, she agrees to join Sonne (Frederick Lau) and his pals in a drunken celebration.

By taking place in real time we’re able to experience an authentic sense of the entire affair from start to finish. Sonne’s gang of twenty-something delinquents Boxer (Franz Rogowski), Blinker (Burak Yigit), and Fuss (Max Mauff) are getting wasted for the latter’s birthday—trying to keep their noses clean by hitting sure-thing spots like procuring free booze from the convenience store with a narcoleptic cashier or basking in the moonlight atop a nearby building’s roof. They speak German amongst themselves with Sonne’s English proving the best to keep Victoria in the conversation—or out if what his boys say might ruin his chance for a goodnight kiss. They’re practically kids, smiling and laughing and busting each other’s balls until their new friend announces it’s time to leave. If only she knew her night was about to amplify ten-fold.

While the main crux underneath everything is the burgeoning relationship between Victoria and Sonne, our reason for watching—and the director’s impetus to write the film alongside Olivia Neergaard-Holm and Eike Frederik Schulz—is its bank robbery. Just as the two lovebirds are sparking, his phone rings with Boxer on the line explaining that “He called.” The mood takes a full one hundred and eighty degree turn as Sonne hangs up, apologizing that he has to go do his ex-convict friend a favor. Unfortunately for Boxer, said event requires four bodies and Fuss has had too much birthday fun to be of use to anyone. Afraid showing up a man short would spell the end of his freedom, Boxer begs Sonne to recruit Victoria. How could she resist the tease of a two-minute job that probably isn’t legal?

My favorite part of the endeavor is this tonal change from wild night out to serious, life or death stakes. Boxer is legitimately scared, going off the rails that they are about to be late for what he assumes is a state of the union meeting with the gangster who provided him protection while incarcerated. Sonne tries to put up a confident front if only to not frighten Victoria and Blinker is seconds away from jetting. These aren’t hardened criminals—not even the one with a record. There’s no feeling of security underneath ski masks or behind loaded handguns, only uncertainty. It’s no wonder they’ve rendered themselves three sheets to the wind to numb their nerves against the danger awaiting. We’re never fooled into believing they’re bad-asses and neither is Victoria. She wouldn’t have gone along if so.

I love this aspect because it throws us into the action, utterly clueless about what might result. Fear sets in so immensely that some threaten to quit just as others volunteer to do it themselves so no one else gets hurt. I could see myself in these guys: psyched up by the concept of armed robbery but unprepared and sheepish when given the opportunity. It’s this second-guessing that has Victoria and us believing the easy-going demeanors and endearing personalities met an hour earlier are truly who these guys are at their core. She needs to help them out of their jam and we find ourselves clenching our jaws in hopes everything turns out successful. But there is still another hour after the heist is over and that length of time can only spell doom.

The adrenaline rush provided by the single-take cannot be denied or dismissed as a gimmick. It’s crazy and a massive undertaking needing three sound crews, twenty-two locations, one hundred and fifty extras, and six assistant directors tasked with ensuring the road was smooth and near flawless—at one point early on Lau slips up by saying “hotel” instead of “café” before laughing it off without missing a beat (they do go to a hotel much later on). Schipper gives us a couple breathing points where the dialogue is muted as Nils Frahm‘s score replaces it, but besides that we’re on the move and running right alongside the characters. While the lack of cuts is paramount to this visceral and emotional ride, however, the logistics of its runtime do create some inherent lulls.

Whereas Birdman‘s seamless transition trickery allowed it to play with the passing of time, Victoria cannot. Schipper tries his best to keep destinations inside a five-mile diameter so we don’t waste too many minutes in-transit, but I won’t lie and say I didn’t feel anxiety in knowing there was no escape from the minutiae contemporary cinema has all but erased via jump-cuts. While the claustrophobia manufactured can seem unbearable, however, it also increases the efficacy of the performers’ changing frames of mind. With nowhere to go we’re forced to watch joy turn to despair—fun thrills disintegrating into a harsh tragedy no one could anticipate from where the camera turned on. Costa and Lau are mesmerizing even in those quiet moments I could see trimmed, their feelings realistically budding into love onscreen until life inevitably intervenes.