TIFF Review: The Middle Man is a Meandering Norwegian Drama of Off-Kilter Absurdity and Bone-Dry Hilarity 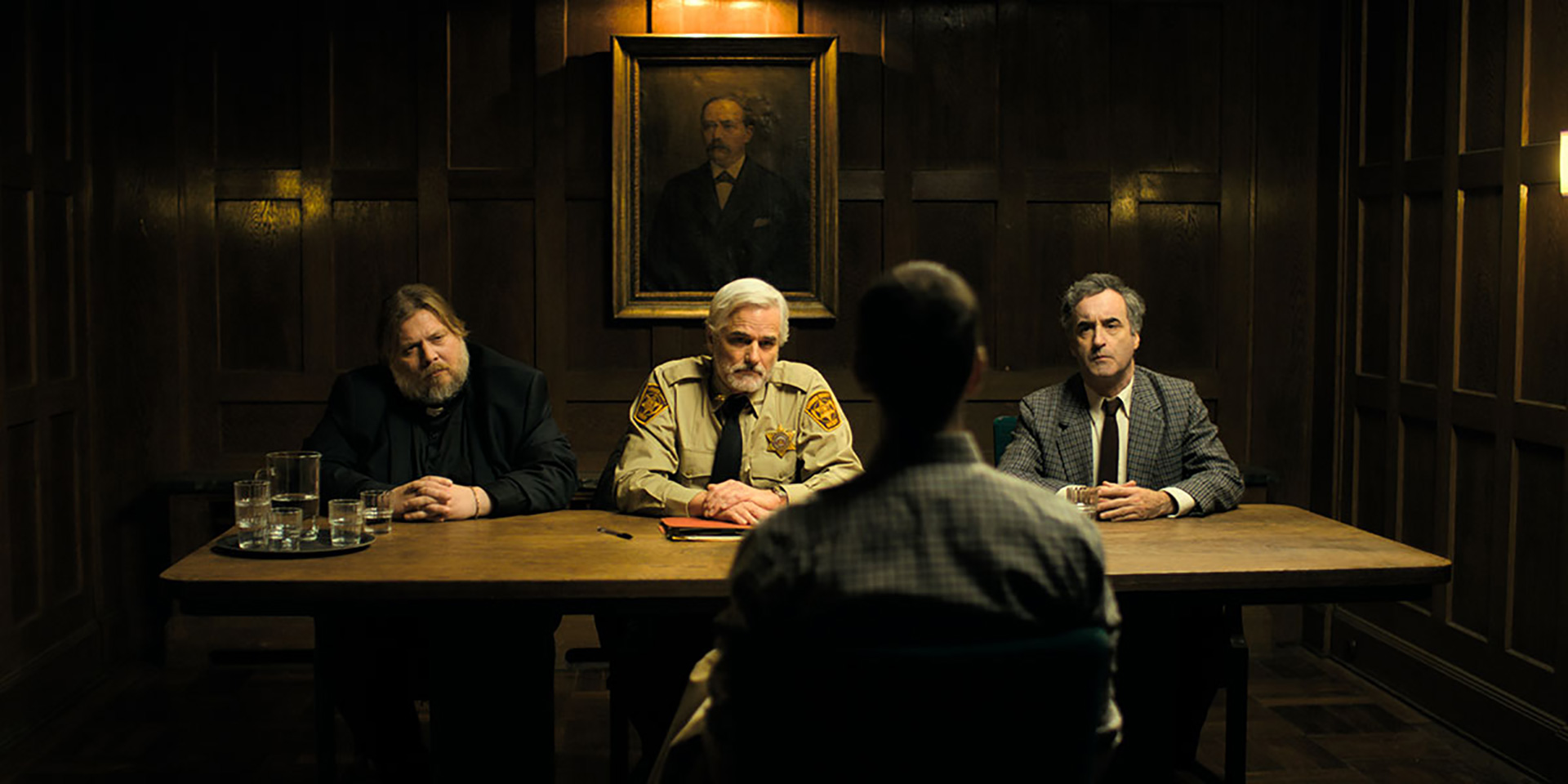 Frank Farelli (Pål Sverre Hagen) has been unemployed in a dying town for quite some time. The area used to attract visitors in the past—not many, but enough to staff a hotel that’s now been closed for years. So too has the local movie theater. As the so-called “Commission” (Paul Gross’ Sheriff, Nicolas Bro’s Pastor, and Don McKellar’s Doctor) explains it, they may not be able to keep the streetlights going thanks to a dwindling budget caused by a lack of taxpayers. Not only has most of the town left, but those who inexplicably remain are currently suffering from a rash of accidental tragedies. And since Town Hall consists of those three men and a secretary (Tuva Novotny’s Brenda), someone is needed to break the bad news.

Enter a newly formed government position: The Middle Man. It won’t be easy, but Frank used to work a train station window before it also shut down and left residents blaming him for the locomotive not stopping. He thus knows how it feels to be abused for circumstances outside his control—and he needs the money, if for no other reason than to stop being in his mother’s (Nina Andresen Borud) hair all the time. The Commission is tough, though. They never relinquish their poker faces while grilling him to make certain he’s the better candidate amongst the two who applied (Frank’s “nemesis” Bob, as played by Trond Fausa, is the other). Brenda, having dated Bob, knows Frank is the frontrunner. His docile temperament is more appealing.

Working from Lars Saabye Christensen’s novel Sluk, Norwegian writer-director Bent Hamer leads us through Frank’s story with an off-kilter absurdity and bone-dry hilarity. Casting a recognizable European and Canadian stable of actors only adds to that tone, since the setting (as evidenced by painted signage on a building) is meant to be America. Think the Rust Belt with its decaying factories and oblivious yokels too entrenched (and poor) to ever follow those who already escaped when the writing first went on the wall. And they all know each other to the point where the Sheriff swearing Frank to secrecy about his job proves ludicrous. Everyone is probably discovering who was recently maimed or killed as he’s telling next of kin.

In great comedic fashion, however, Frank’s hiring leads to an unlikely streak wherein no one gets hurt at all. There he is in his new black suit—always on call—with nothing to do but awkwardly flirt with an obviously interested Brenda. It should be no surprise, then, that when tragedy does finally strike, he’s present at the incident. Suddenly he’s told he’s bad luck and we’re left wondering if it’s true. Frank told the Commission during his interview that he witnessed his father’s accidental death. And he couldn’t even get that suit measured without having to discover the tailor would be his first “client.” Death and pain seem to follow him even though he himself would never hurt a soul. He’s like a walking Monkey’s Paw disaster.

And it only augments caustically satirical humor. Between Frank’s nice-guy obliviousness, the Commission’s dead-pan severity, and the usual small-town antics always ending in bloodshed that’s way more extreme than it ever should be, The Middle Man gradually finds itself devolving towards a very dark place. We need it to: the wordplay—Frank is very bad at his job due to a penchant for vague dialogue that ultimately extends bereavement notifications well past their sweet spot—would get stale as our sole point of intrigue. More than act as a bystander in the aftermath, Frank must also become a participant in the carnage. Whether through coincidence, dumb luck, or ineptitude, his position starts a deadly ball rolling that he cannot stop. Then come the secrets.

One of the best scenes is between Frank and his best friend’s (Rossif Sutherland’s Steve) father. Martin Miller is played by the great Kenneth Welsh and the way he interjects throughout Hagen’s delivery of bad news is masterful. There’s the frustration towards Frank’s inability to cut to the chase, anger from the knowledge that nothing good will come from him finally spitting it out, and contrition once the grieving process advances to its logical conclusion. The way characters react to Frank’s news is a major selling point. Hamer ensures no two instances are the same—only the desire to manufacture hope through phantom eye twitches that are probably just expanding muscle tissue. And it’s only a matter of time before Frank finds himself on the other side.

This last part got things going for me; it gave purpose to what had been a meandering, almost plotless narrative. As Frank’s involvement in the mishaps escalates—ironically, considering he wonders aloud “What is an accident?” while thinking about finding patterns to root out the cause—revelations come to light that set-up a truly macabre climax perfectly suited to tie things off with a bittersweet bow, only for the filmmakers to abruptly stop short. There’s another possibility (Frank’s final scenes might be all in his head), but my even considering that is based on a very brief exchange I might be reading too much into—simply because I intellectually need the conclusion to be more than its literal appearance. Maybe a second viewing will provide a stronger foundation.

The Middle Man premiered at the Toronto International Film Festival.