TIFF Review: The Girl and the Spider is a Mesmerizing, Moving Drama Full of Mystery 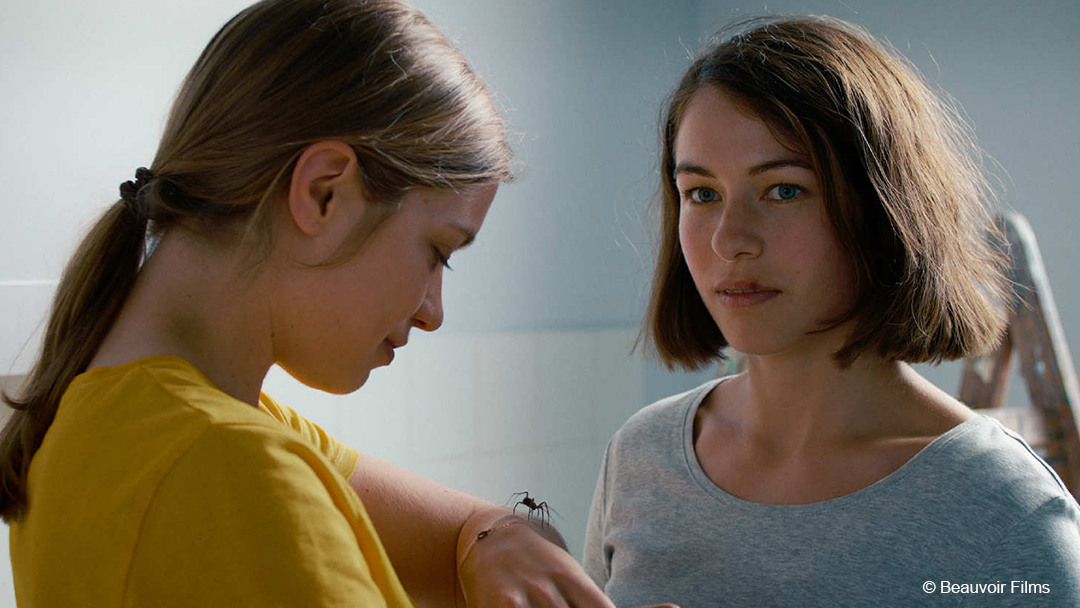 Ostensibly the story of a Berlin family preparing for its evening dinner as a cat wanders the apartment, The Strange Little Cat was among the most beguiling films of the early-to-mid 2010s and its more mysterious explorations of everyday family life. With the 2021 Toronto International Film Festival entry The Girl and the Spider, director Ramon Zürcher returns, with brother Silvan Zürcher as co-director. (The latter produced The Strange Little Cat.) Spider is equally captivating––a mesmerizing, uniquely ambiguous study of friendship, rivalry, tension, and memory. It is difficult to remember another recent film that does so much with so little in the way of plot and location.

Surprisingly, the key emotions of The Girl and the Spider are summarized with a description of a side character who never seems to leave her apartment: “[S]he is sad. She longs for people. That’s why she stays in her dark room, until one day, she won’t wake up. And until then, all she feels is her loneliness, her desire, and her pain.” Loneliness, desire, and pain seem to drive every action and every interaction in the film. That is not to say the characters on-screen are incapable of joy or delight; there is much of this to be found. But those emotions are fleeting. And in the end loneliness, desire, and pain linger.

The Girl and the Spider is still charming, at times very funny. Chief among its delights are its stars. Liliane Amuat plays Lisa, who is moving to her own apartment and leaving behind her roommate Mara (Henriette Confurius). The relationship between the two is warm but strained, the exact reasons for this move unexplained. Is there a bond between the two that spreads beyond just (soon-to-be former) roommates? The Zürchers never quite say. What is clear is that Lisa will leave Mara behind.

The film is often focused on wounds—not just emotional. Near the start, Lisa’s mother notices a (hard-to-miss) red sore on Mara’s face: “Have you got herpes?” “Yes,” she responds with a smile. After a quick kiss between Mara and Lisa, mother is quick to chastise: “You’ll catch her herpes.” Indeed, a transference does occur. The Zürchers’ camera often stops to stare at signifiers of pain––a bloody band-aid, a countertop scratch, a dead fly, a drink dripping onto the floor. These shots add an additional dash of mystery to a film of furtive glances, defeated expressions, and utterances left unsaid.

Spider moves between Lisa’s new apartment and the one being vacated. In the latter we meet a series of similarly aged neighbors, whose connections with Mara and Lisa are left purposely puzzling. A handyman becomes a figure of desire while other denizens––some children, an old woman missing her now-departed cat (departed to its real home, that is)––and even some other folks in the neighborhood circle in and out. The Girl and the Spider has been described as a “chamber piece,” which is not inaccurate. But it is a chamber piece filled with unique characters and spaces that are both recognizable and enigmatic. And in Mara and Liza, so adroitly and sweetly played by Confurius and Amuat, we have characters whose lives are explored in intimate detail while motives remain appropriately unknowable.

Ramon and Silvan Zürcher have crafted an extraordinarily patient, emotionally probing, deeply moving film that engages with and profoundly understands the complexities of life. Yes, very little happens; that makes occurrences even more resonant. Take Mara’s final story, about a spider she spotted above her bed when she was a child. It came “to visit” her each night, until… it did not. The image is haunting, and clearly parallels the divergent futures for Mara and Lisa. The Girl and the Spider’s lovely concluding shot visualizes this fading relationship, and stands as the filmmakers’ final statement on the fleeting nature of love in all its forms. It is both bitter and sweet. So is this beautiful film.

The Girl and the Spider screened at TIFF and will be released by Cinema Guild.