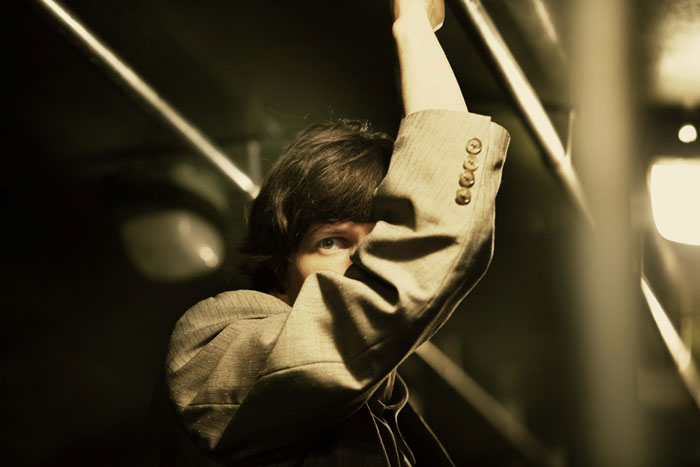 Comically dry like director Richard Ayoade‘s debut, Submarine, his sophomore effort takes more than a few steps towards an even more arid realm of complete existentialist surrealism. As adapted by the helmer and Avi Korine, The Double brings Fyodor Dostoyevsky‘s novella to the big screen with a surefire confidence in its visual form and an eccentric comedy that should go a long way towards securing the IT Crowd star as a permanent, unique voice in contemporary cinema. There is a definite stylistic kinship to his first film, pairing it well with this one’s descent into a psychological conflict of identity: every waking second of Simon James’ (Jesse Eisenberg) entire existence shatters with the introduction of a confidently superior doppelgänger named James Simon. Eisenberg is a fantastic casting coup, in part because of his faux intellectual Squid and the Whale character, Walt Berkman, having that memorable line which describes Franz Kafka‘s The Metamorphosis as being “Kafkaesque.” Despite its direct Dostoyevsky inspiration, the film is very much in line with that author’s works, a similar monotony of statistical bureaucracy seen in the likes of Brazil and Bartleby. (Not that it takes much from Melville, however.) The comparisons can be made right from the start, as Simon finds himself sitting on the train minding his own business when a gentleman comes over to demand his seat. Confused and bewildered by the request as the camera zooms out to show no one else on the car, the scene’s meticulous orchestration is but the first of many to bring this off-kilter, personal dystopia to life.

The security officer at Simon’s work (Kobna Holdbrook-Smith) refuses to acknowledge he’s ever seen him before, despite working there seven years, while manager Mr. Papadopoulos (Wallace Shawn) believes he’s a brand new employee able to mentor / babysit his rebellious daughter, Melanie (Yasmin Page). His coworker “friend,” Harris (Noah Taylor), is indifferent to him unless he needs his work done, and the only person who does notice he’s alive — Hannah (Mia Wasikowska), the copy girl he’s also infatuated with — barely bothers. Some broad comedy enters, too, with Simon trying to exit elevators despite them opening when he needs them closed (and vice versa), all while quick cuts mix with fast-paced extended takes to portray the oppressive size of a workplace brimming with elderly men in cubicles. The film becomes a methodical exercise in futility as Simon wades through life without an assertive bone in his body, let alone the courage to say two words to the woman he loves. He hides behind corners to catch glimpses of Hannah, peers at her through his telescope from the apartment building across the street, and pathetically runs to her complex’s trash room to catch the ripped-up bits of drawings she throws down the chute. Though unappreciated and invisible, it’s the friendly wave of a gentleman jumping off a ledge, to his death, that shakes Simon from his doldrums; detectives (Jon Korkes and Craig Roberts) inform him it’s a common occurrence, however, and proceed to set odds he’ll probably be next.

But instead of ridding the world of one Simon, fate / mental imbalance / sheer artistic lunacy decides to add another. James becomes everything Simon wants to be, taking credit for all his work despite not even knowing what they do and garnering the attention of every attractive woman in their path, Hannah included. Simon’s alter ego becomes his greatest champion, too, if only to steal his every intellectual thought so he may pair it with an already gregarious demeanor. Other people start noticing Simon, due to his resemblance to James, yet being seen and called Stanley might be worse than getting ignored altogether. And just when the two metaphysical twins appear to be partnering up, James’ plans to take over Simon’s life make themselves known. Ayoade has crafted a smart, high-concept puzzler with a keen sense of comedic timing and a fine cast littered with familiar faces — try and spot Rade Serbedzija, Sally Hawkins, Cathy Moriarty, and more. Each frame drowns in an artificial blackness, harsh metals and steampunk / obsolete technological amalgams being used as seemingly high-tech office systems. Sly commentary on the doubling is brought to our attention via Simon’s constant trips to Hannah’s floor for one copy of his paperwork while the skin and bones facsimile walking around inside his life ends up not as autonomous as a Xerox sheet. They share a connection that Ayoade exposes through violent rage and a very precise outburst of frustration once Simon finally decides to wrestle back control of his existence.

Shawn, Taylor, and the other periphery characters flawlessly mimic the tone of this cold, drab world in which they reside. Things are very matter-of-fact — almost stilted — as they move along a predestined line from point A to point B and back again ad infinitum. Wasikowska continues her stellar work as the requisite angelic-faced romantic interest, toeing the line between this pseudo world and the one of isolated depression in which Simon lives. And while I worried Eisenberg’s style of cultivated pretension would derail the wonderful things Ayoade accomplished in Submarine, I was pleasantly surprised to see how perfectly attuned to this character he was. Both the cool James and the pushover Simon come to life with the straight-faced wit necessary to ensure this unavoidably divisive work remains far from mainstream mundanity.

The Double is currently screening at TIFF. Check out our complete coverage below.