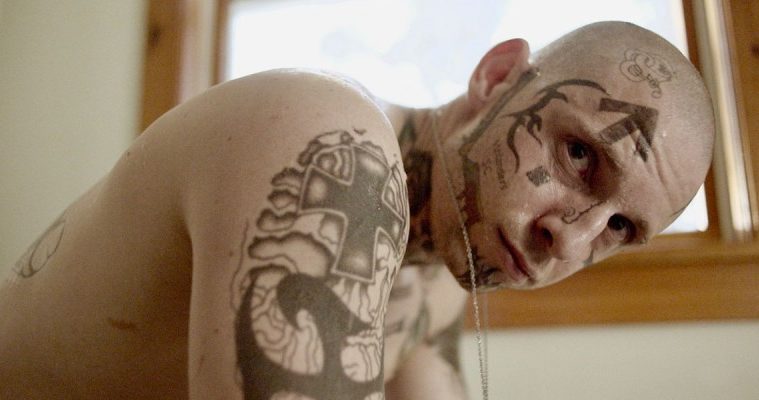 TIFF Review: ‘Skin’ is a Harrowing Journey of Self-Recognition

Bryon ‘Babs’ Widner (Jamie Bell) hears the buzz of a faulty electrical connection, triggering a transition to an operating table and screams as the tattoos covering most of his body start being removed. It’s a soundscape that’ll have you squirming in your seat, the close-up shots of scar tissue replacing ink as physical a transformation as the act is metaphorical. Because the art adorning his face, neck, and torso isn’t some elaborate supernatural fantasy with family memorials—it’s a map to the blackest center of his soul. Babs is a white supremacist and these “patches” define his rage and vitriol. They mark him as property of his Viking captain (Bill Camp’s Fred), a man who saved his life before promptly stealing it by turning him into a monster.

This is the figure at the center of Guy Nattiv’s harrowing Skin, a real-life victim of circumstances who was picked off the street with nothing and indoctrinated into a cult of bile and rage. To watch Babs yell “Blood and Soil” during an opening sequence of protest versus counter-protest (the latter led by Mike Colter’s Daryle Lamont Jenkins) is to see a creature unworthy of saving. His temper makes him prone to violence, his time under Fred’s wing supplying the tools with which to wield it mercilessly. So it’s not surprising when he effortlessly works to put a young black kid in the hospital. He stoicism when inevitably confronted by that victim’s distraught mother spitting in his face showing no signs of remorse. Yet.

We know it will arrive, though, as those aforementioned vignettes with him strapped to a bed show the destination we’re moving towards. The question is therefore how? How can someone so entrenched in the cause thanks to being raised by the charter’s ruthless taskmasters of a king and queen (Vera Farmiga’s Ma) even think about leaving it behind? The answer “love” might seem trite, but it’s no less true. When the only form of love you’ve ever known comes from a place of evil held by your protectors, you carry the burden of aiming to please as a means of showing appreciation. It’s difficult to call Babs a victim because of the things he does, but you cannot deny the psychological hold at the back of those actions.

It’s okay to admit he deserves to burn in hell while simultaneously understanding human beings have the capacity to change. Even if Babs did ask for forgiveness from the young man he scarred for life, Nattiv isn’t naïve enough to show it. That’s not the story he’s telling so doing it would only diminish hate for manipulative melodrama. Contrition is conversely more effective than forgiveness in this instance because it allows the true victim to retain his/her justified rage while also providing the revenge he/she seeks. Showing that Babs is haunted with nightmares of brutal retribution by this boy’s hand lets the audience accept his forthcoming transformation as more than a self-serving maneuver for survival. It acknowledges he realizes it’s his soul that needs saving, not his body.

That his saving grace is a reformed member herself (no matter how tangentially courtesy of an ex-boyfriend) proves honest rather than convenient. Who better than Julie Larsen (Danielle Macdonald)? Here’s a mother of three girls who knows what the hate inside these people’s hearts creates at home. The abuse she might have taken in stride when it targeted her ultimately came into clearer focus once it moved onto the innocent children under her protection. Julie is therefore a perfect contrast to Fred and Ma—the light opposite their darkness. And rather than look to claim ownership over her boyfriend for a fight, she puts those girls first. All she can do is let Bab’s know that her love exists. He must choose to honor it with his own.

The result is a journey of self-recognition. It’s through Julie and her daughters (Zoe Margaret Colletti, Kylie Rogers, and Colbi Gannett) that Babs sees clarity. Two look beyond his tattoos at the man beneath while the others know he’s a long way from earning their trust. Fred bringing a new ward into the mix (Russell Posner’s Gavin) helps by acting as a mirror onto the powerful hold grown from a simple offering of food and shelter. We therefore see diverging paths of compassion (the Larsen sisters) and racism with Babs caught in the middle. He’s torn between a sense of duty to those forcing him to act in ways he can no longer stomach and the love of a woman offered in a way he thought impossible: unconditionally.

It won’t be easy, but the things that matter never are. And this goes for more characters than just Babs. You have Daryle, Julie, and even Ma facing difficult decisions to make. Jenkins might seem like a two-dimensional adversary at the start, but his role is much more important. Despite being a black man who knows what these white supremacists stand for and what they do, he refuses to reject the notion of redemption. He understands the cycle of violence and hate only too personally and thus knows compassion is the answer. Daryle deals in regret and second chances, wielding both as tools to open the eyes of those stuck on a loop wherein fear of rejection and isolation outweighs the fear of consequences and death.

Colter is good even if his supporting role lessens the impact of a man with much greater purpose than shown. Julie and Ma must take precedent, though. We need them as Babs’ yin and yang—one to bend and one to break. Macdonald is wonderful with a heartfelt empathy and fierce strength in the face of horrors. Nothing within this film is more authentic than seeing her protect Babs at risk of her own well-being only to shift focus immediately onto her girls the moment they are threatened. That is a true sign of love and one I hate to admit Ma possesses too. It works because of Farmiga’s skill to traverse the slippery slope of doing the right thing without earning one iota of sympathy for it.

In the end, though, they’re only as good as the man at the center. They need Bell to give the tour de force performance he does in order to allow them the ability to go into the darkness with him. A just world would place him in the awards conversation, but ours will probably not give Skin the platform necessary for that to happen. He embodies Babs’ contradictions with deft skill, moving his unbridled rage from aggression to guardianship without possessing the off-switch necessary to let his targets know the difference. We take him at his word and yet remain as uncertain as he is about whether it’s enough. Maybe Babs will prove just as ruthless and mean without the tattoos, but we’ll never know until they’re gone.

Skin premiered at the Toronto International Film Festival and opens on July 26.