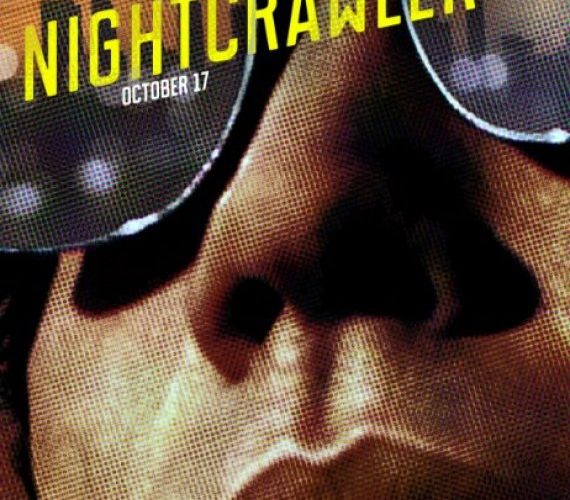 There are some huge ebbs and flows in Dan Gilroy‘s Nightcrawler. At times I loved it, others I felt bad for laughing, and some instances made me wonder what exactly it was I was watching. In the end, however, I can unequivocally say it’s a gem of a lean, mean film that never let’s its foot off the gas pedal with an iconic antihero in Jake Gyllenhaal‘s Lou Bloom who might currently be tops on hardcore cinephiles’ Halloween costume lists come October. Even though there isn’t a conventional plot since the film is more concerned with delivering high octane suspense and extremely high (and warped) entertainment value, you won’t be able to get it out of your head.

A commentary on today’s network news stations needing to cross the line of decency in order to compete with the 24-hour cable cycle and internet access to the newest ISIS beheading, the job of a “stringer” proves an adrenaline sport. And if someone like Bill Paxton‘s competition didn’t think so originally, he surely does after Lou makes his way onto the scene. Think of Bloom metaphorically as the cable news — a business with larger budgets, wider reach, and more lenient censors — because he’s the definition of a sociopath who’s also very much on the autistic spectrum. When he sets his mind to something, he works for it until it’s his. His tenacity is unparalleled, his retention of fresh information insane, and his complete lack of moral compass a true leg ahead.

With those perfectly catered qualities, it’s a wonder it took him so long to come across the occupation during his late night jaunts around the city for scrap metal to steal and sell. Robotically spouting corporate culture literature as though he’s a Fortune 500 CEO with the faux patience and sweetly saccharine smile of a used car salesman, Lou Bloom is capable of pissing you off as easily as earn your love. This is why his eventual partner/protege Rick (Riz Ahmed) gets so frustrated once he hones in on the latest grab from the police wire and why his cutthroat Channel 6 client Nina (Rene Russo) wants him as a cash cow she can milk for the ratings she needs to retain her job.

Bloom’s business is paparazzi for carnage. He watches Paxton once, gleans a starting point, researches the tools, gets a foot in the door, and turns the whim of a creeper with a pawn shop camcorder into a business that affords him state of the art equipment to beat out any competition. Just as he pushes forward for progress financially, though, he also covets an increase in aesthetic quality. Lou Bloom is nothing if not prideful and confident in his work. But while breaking into houses for the shot or shoving a camera into a dying victim questions decency, his efficacy to arrive before the police also provides opportunity to create the news himself.

This is where Gilroy’s script excels because the expository origin story admittedly gets long-winded. There have been comparisons to Drive that I can agree with in this respect. It may not be quite as laborious, but Nightcrawler is slick above all else. What makes it better is that Ryan Gosling’s stoicism is replaced by Gyllenhaal’s no-nonsense loquaciousness steering conversations while subtly turning the knife when those he’s engaged least expect it. His Bloom is very detailed oriented and very calculating, causing him to pause and collect his thoughts in order to take control if not already the smartest person in the room. The scariest part of his derangement is that he almost always is. This leads to so many memorable exchanges of unemotional sentiments in response to legitimate concerns any other normal human being would have. That’s why you cannot simply label him sociopathic. He doesn’t connive to get his way; he transparently finds an avenue to earn it. What you see is what you get and that person is motivated to succeed at all costs. The Asperger’s like quality pushes him to the ends of the world and the sociopathy prevents him from hitting a wall. So if competition starts infringing on his profits, he won’t be afraid to take action. And if there’s the possibility of getting a career-making shot without physically moving the body, he’ll freely withhold whatever’s necessary to attain it.

Gyllenhaal’s role overshadows the whole while also making it better. If anything comes close to his portrayal, though, it’s a tensely orchestrated sequence that begins statically and explodes into a screeching chase without brakes. Lensed by Robert Elswit, if I was on the fence before its climactic insanity I wasn’t afterwards. There’s still one last exchange between Gyllenhaal and Russo that begs for interpretations positing whether some of what happens is purely in his mind, but even it couldn’t detract from the heart-pounding pursuit people will be talking about for months to come.

Nightcrawler premiered at TIFF and opens on October 31st. See our complete coverage below.