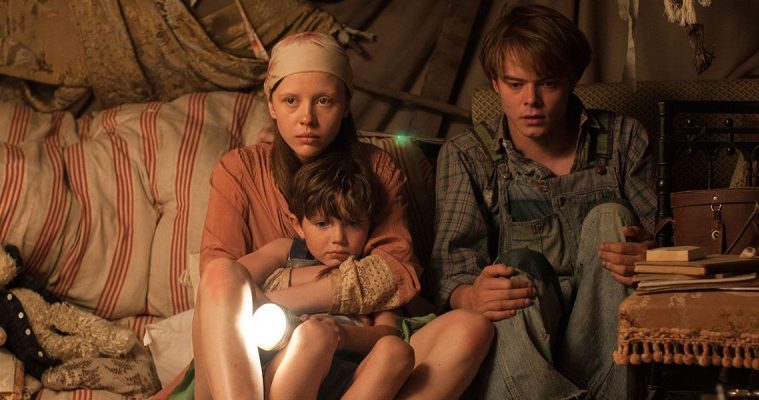 TIFF Review: ‘Marrowbone’ is a Convoluted Mystery from the Writer of ‘The Orphanage’

For a mystery film, Sergio G. Sánchez’s Marrowbone inspires a lot of questions, although they’re more related to what’s outside the film. Here’s a question that kept popping up in my mind: did the writer of The Orphanage – one of the more unsettling and affective horror films from this century – really make this? The family drama, ambiguously supernatural scares, and tragic undercurrent from The Orphanage are all here, but filtered through a screenplay written by someone who must have been raised by wolves. Maybe this is a different Sergio G. Sánchez making this. Maybe this impostor lied on the application form. Either way, that situation is easier to believe than almost anything in Marrowbone.

Taking place in the late 1960s, Marrowbone opens with a prologue showing siblings Jack (George MacKay), Billy (Charlie Heaton), Jane (Mia Goth), and Sam (Matthew Stagg) arrive in a US coastal town that looks nothing like America (Sanchez thought that he could pass off Spain as America for some reason). Their mother has taken them away from their evil father in the UK to live in a massive house, with the intent of starting a new life in the land of opportunity. But several cuts later and mom is on her deathbed from a vague illness, pleading to Jack that he must hide from the authorities until he turns 21 so he can inherit the house after she dies, which she does moments after saying this.

And so Jack goes into hiding with his brothers and sister, with only their young neighbor Allie (Anya Taylor-Joy) knowing the truth about their situation. Flash forward to three months later, and things have changed at the household. The top floor is bricked up, every mirror is either covered or removed entirely, and the kids are going stir crazy from their isolation, claiming that a ghost lives with them. Something bad has happened within those three months, and in the name of arbitrarily prolonging things to try and increase drama, Marrowbone takes its sweet time to reveal its big plot twist.

Until that last act reveal, Sanchez creates one fine unintentional comedy, crafting ridiculous moments with a complete lack of awareness about how nonsensical they are. Take one scene where Jack sneaks off to visit Allie at her job in the local library. “What’s with all the books?” he asks, as he strolls up to her desk. Or take another scene where Billy keeps watch over the house with a rifle, carving “DAD” into one of his bullets (in case we don’t already know they’re afraid of him). This scene spawns so many questions. What if Billy ends up using the bullet on something else? Will he have to carve “DAD” into every bullet to make sure? Is he doing this to remind himself of what the bullets are for?

My favourite moment in Marrowbone comes when Sanchez throws another plotline into his needlessly convoluted story. Allie and Jack fall in love, much to the chagrin of a local lawyer (Kyle Soller) who’s been trying to get Allie to go out on a date with him. At one point, Jack and Allie spend the day together alone at a deserted beach, only for the camera to zoom out and reveal the lawyer watching them from far away on the side of a mountain road, fists clenched in fury at their affection. More questions abound. Did he follow them? He’s standing beside his car, so did he see them while driving? How did he know it was them when he was so far away? Was he just being a voyeur until he got a closer look? On an existential level, Marrowbone is the kind of thriller that’ll keep you guessing.

Although it doesn’t take much guesswork when it comes to figuring out what Sánchez has hiding up his old, loose, and tattered sleeves. Without doing the favour of giving too much away, it’s a mish-mash between Identity and The Others, and when Sánchez finally lays out all of his cards you can feel the whoosh of dust flying out of the screen as he brings this old, musty plot twist out of retirement. But some credit should be given to Marrowbone, which isn’t completely without merit. The cast carries themselves as best as they can, with Taylor-Joy coming out mostly unscathed, cinematographer Xavi Giménez makes the most of the location’s idyllic scenery, and Sánchez goes into full-on horror mode he pulls off some effective scares. It’s just too bad that Marrowbone is more likely to inspire screams of laughter than fright.

Marrowbone premiered at the Toronto International Film Festival and opens on April 13.