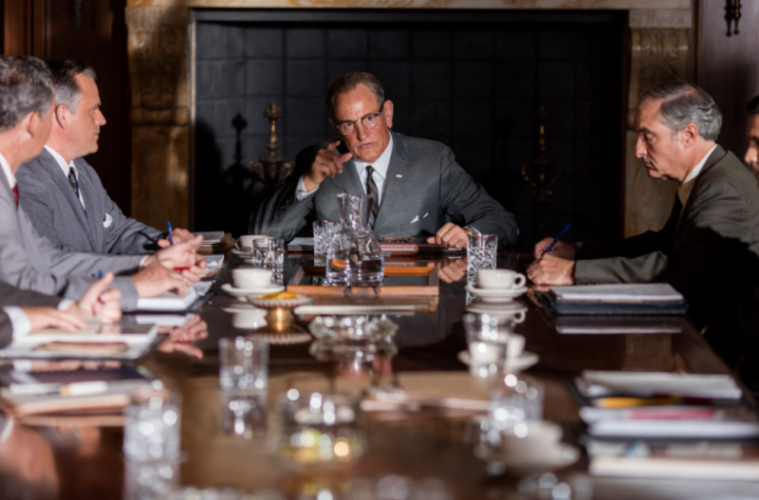 There’s been no shortage of Lyndon B. Johnson depictions on film as of late, with Ava DuVernay capturing the 36th U.S. president as an arrogant man trying to diminish MLK in Selma (as played by Tom Wilkinson), Bryan Cranston getting an Emmy nomination as Johnson in All The Way and, now, Rob Reiner directing Woody Harrelson in the makeup-heavy historical drama LBJ.

Having the actor play LBJ is somewhat of a curious choice, but it does work. He exudes playfulness, but also robust aggressiveness in his portrayal of a man that lost the presidential race to his nemesis JFK only to end up becoming vice president and, ultimately, the president after the assassination of JFK in Dallas. All doubt about whether or not Harrelson could pull it off is quickly diminished once he appears in the film’s very first frame. He not only embodies the mannerisms and social awkwardness of Johnson, but turns out a very comedic performance worthy of his talents.

The same can’t be said of Jennifer Jason Leigh as Lady Bird. Stuck with a fake-looking prosthetic nose on her face and an underwritten role, the actress cannot overcome the trappings of her role, which feels stilted and almost cardboard.

A lot of the blame must got to Reiner who directs the film in such a flat, almost satirically skittish way that all the positives that Harrelson’s performance brings are quickly overshadowed by clunky, contrived filmmaking. From the low-horned drumbeat presidential soundtrack to the abnormally hammy inspirational speeches, this feels like by-the-book awards bait circa 1992.

LBJ specifically deals with an important time frame in American political history. When civil rights were at the forefront of everybody’s minds, a progressive like JFK made it to the White House and Johnson, a Texan with somewhat progressive ideals, was chosen as Vice President.

The battle of wits between Johnson, Speaker of the House and imposer of power, and Kennedy, a much younger, more attractive candidate that stole America’s heart, is mostly sharp and intriguing in its depth and feel. Both were at polar opposites of the spectrum when it came to their personalities and, yet, they both had to work together to make the Civil Rights movement progressive at a crucial time of change.

Some of the most captivating sequences deal with the political talk that was going in the White House between staff, recalling Steven Spielberg’s much more complex and masterful Lincoln. With his film, Reiner chooses a strange, almost too-focused aesthetic for his film. Remember that recent Funny or Die skit where Johnny Depp chewed up the scenery to play Donald Trump? Well, this isn’t that far off in terms of quality, resulting in an empty and conventional visual style.

Once the JFK assassination does happen, the film is left with an empty void. Gone are the verbal fireworks between Johnson and the Kennedys, replaced by the accomplishments that Johnson would achieve as the 36th president. Although Reiner adequately showcases most of the notably worthy achievements of Johnson’s presidency, his biggest flaw lies in the refusal to tackle what would ultimately be the president’s lasting legacy: his decision to invade Vietnam. LBJ simply pretends as if one of the worst presidential decisions in the country’s history never happened.

When all is said and done, Reiner takes no risks and leaves out any trace of artistry in his film. Instead opting to tell a good old-fashioned story, he has a central performance to back him up, but fails to register many of the most compelling aspects of President Johnson’s history.

LBJ premiered at the Toronto International Film Festival and opens on November 3, 2017.