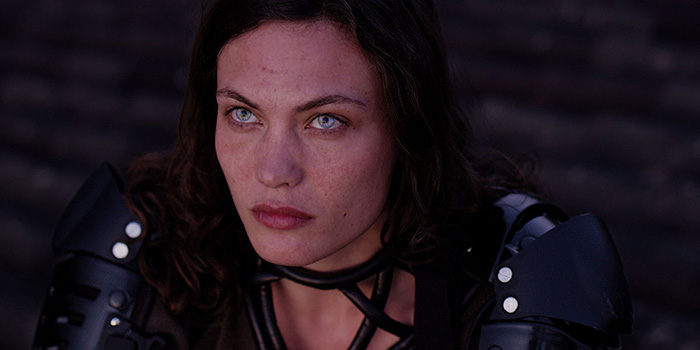 Redemption is a tricky concept. Can you be redeemed without forgiveness from those you wronged? Are our actions in the aftermath enough to achieve some semblance of peace if they show we’ve learned through remorse? Everyone has a different opinion on the matter whether victim, loved one, stranger, or corporation. Rehabilitation only goes so far when you find yourself free without any opportunities to prove to yourself that change was worth the trouble. There’s a reason so many criminals find themselves right back in jail and it’s not simply due to them being inherently evil because few people are. They’re marked, reduced to their worst day, treated like a second-class citizen, and worst of all haunted by the memories of what they did. Good intentions are never enough.

Now if things are that bad today, how much worse can they get in the future? Caroline Poggi and Jonathan Vinel seek to answer this question with their unique science fiction Jessica Forever by creating a world wherein orphans have no rights. Why this premise comes to pass isn’t explained, only that the situation has left them with no other choice but to lie, cheat, steal, and kill. Desperation has a way of making us do things we’re not proud of and finding success in those acts inevitably makes it hard to stop. And by the time these boys become hulking masses of muscle with proficiency in automatic weaponry, trying to talk them down will only earn you a bullet in the head for your trouble.

That’s where the enigmatic Jessica (Aomi Muyock) enters. She’s found a way to reach these boys and lend them a calming voice to stop their rage long enough to provide what they’ve never known: family. The film posits that they’ve turned into monsters because they had no one but themselves to teach them how to survive. They never learned morality or boundaries, compromise or love. It got so horrific for some that they started wreaking havoc for pleasure instead of necessity — their bloodlust so strong that a lack of violence forced them into practicing self-harm for their fix. Eventually an unseen contingent of “Special Forces” unleashed their drones to take each one of them out. Wielding them as a common enemy, Jessica shows these men they aren’t alone.

Poggi and Vinel drop us in without context or orientation. We don’t know how long these “lost boys” have been under her wing, only that they’ve found balance within. They’re warriors who nap together, eat together, train together, and never leave home without someone to accompany them as a sort of security blanket from the dark thoughts isolation conjures. And on this day they’ve found a new recruit in Kevin (Eddy Suiveng). We experience his initiation: an open-ended invitation he has every right to refuse. Acceptance leads to brotherhood with each member supplying a gift to cement his bond with a smile. It’s not a seamless transition with tempers hot and testosterone flowing, but Jessica only has to lay a hand on one’s chest to soothe the soul. What’s intriguing about their story is that we meet them at a moment of flux. To look at this group is to see a well-oiled machine steeped in routine where everyone has everyone else’s back. They’ve obviously fought the “Special Forces” before considering their bulletproof vests and high-powered guns, but we’re uncertain if they’ve experienced loss since their rebirth. So when tragedy strikes the team, those optimistic faces of hope disappear in an instant. All the hard work they’ve endured to reclaim their humanity despite not forgetting who they are beneath these freshly cleaned façades evaporates to remind them of the pain that used to define their lives. One bullet sparks a psychological regression that takes us into the tortured minds of men struggling to reclaim their innocence.

From frame one Jessica Forever moves at a stylistically measured pace with voiceover taking us through slow shifting pans and purposefully composed static shots to present a clinical look at the characters within. It’s as though we’re watching playback to try and understand where everything went wrong, each man frightened by his own demons that have bided enough time before striking quick and mercilessly. Some sequences almost have an experimental feel with unprovoked animation (the first time something floats up from where it rested is strange yet abstractly beautiful in its emotional resonance), otherworldly beings, and projections of the dead. There’s an oddly quiet strain of surrealism that takes hold of the imagery to share metaphor, give pain physical form, and unleash dark premonitions of impending carnage.

These transitions from reality to hallucination are absolutely heartbreaking thanks to these men being so childlike in their docility around Jessica before turning feral without. Michael (Sebastian Urzendowsky) is a baby-faced member we wouldn’t believe did anything terrible until sharing the scope of his crimes with a woman for which he can’t help but fall in love (Maya Coline’s Camille). Lucas (Augustin Raguenet) seems the most vicious of them all and yet proves even-keeled if robotic when he isn’t provoked into unrepentant malice that pushes him to tears when brought back to clarity by a “family” member. Julien (Lukas Ionesco) proves the sweetest and most tormented of the bunch with Raiden (Paul Hamy) revealed as a devastating example of toxic insecurities and fear. They unravel before our eyes.

Maybe that’s part of the plan. Maybe the time spent with Jessica was only to earn them a reprieve from their personal hells rather than cure it completely. One could say a cure would do no help anyway because we need those scars to remember our failings and accept our guilt rather than run away. Perhaps Jessica is their reaper rather than savior, her duty to open their hearts in order to understand the punishment they deserve. She’s here to make them feel the pain of what they did instead of simply enjoy the thrill of the act itself. By loving each other these men realize what it is they took from their victims. By reaching that level of recognition, they can finally rest at peace.