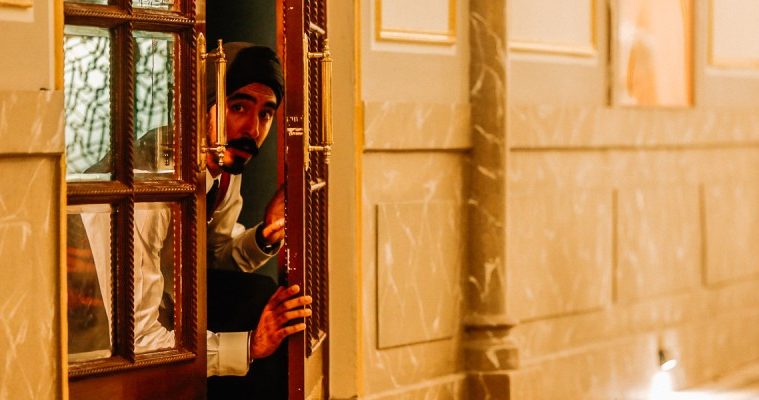 I remember the November 26, 2008 Mumbai attacks very well; my family and I were in Delhi for a cousin’s wedding and cooped up in a hotel room watching the news unfold on TV. Mumbai was a city we had lived in, traveled to often, and everyone on screen looked like people we’ve crossed paths with before. The attacks ceased on November 29 and Indian filmmaker Ramgopal Verma, known for his crime dramas, accompanied the police while they made their way into the gutted Taj Mahal Hotel. There was speculation that he was laying the groundwork for his next film, and a consequent public outcry against him occurred for reportedly wanting to monetize this horror. Anthony Maras’ reconstruction of the night of terror in Hotel Mumbai reminded me of just that.

The film is a dramatic reconstruction of the coordinated terrorist attacks, which took place in several locations in Mumbai, and mostly focuses on the attack on the sea-facing legendary Taj Mahal Palace Hotel. The main characters of the ensemble thriller-drama are hotel guest David (Armie Hammer) who is traveling to Mumbai with his wife Zahra (Nazanin Boniadi), newborn son, and his nanny, Sally (Tilda Cobham-Hervey); the restaurant server Arjun (Dev Patel); and the head chef Oberoi (Anupam Kher). The film charts the occurrences of the evening—from guests unassumingly enjoying their dinner, to the first attacks, then the very hospitable hotel staff moving the guests from one safe space to another, to the final arrival of the special forces unit which managed to kill all the terrorists present and bring an end to the firing.

For a story that is widely known and reported, it is quite a task for a film with several subplots to retell it and make the narrative tight enough for people to remain hooked. Hotel Mumbai does this very well, on top of boasting of some great performances from Dev Patel and Nazanin Boniadi.

There is, however, something to be said of the ethics of such filmmaking. It is largely uncomfortable to have a film, meant to serve mostly western audiences, turn a national tragedy (a nation that is not the director’s own) into a thriller that adds nothing to the narrative people already know, but just re-sensationalizes it and packages it to fit an entertaining and engrossing thriller, and an extremely emotional heart-wrenching drama. One may also debate about the director’s authority in taking a narrative like this and adding touches of fiction to it, especially in the scenes where he infuses humor into the narrative through the terrorists. It is also downright absurd to have a terrorist breaking into a Punjabi sufi song while watching over people he has tied up and is gearing up to kill. Then there are the smaller production nuances that are bound to be overlooked when one makes a film about a culture one is not very familiar with. How is this, then, so different from what people thought Ramgopal Verma would do? Does the slickness of a high-budget Australian production make it alright?

There is also the danger of toeing the line of Islamophobia with depicting jihad and militant Islam within the context of terror attacks only. What the audience sees are four young Muslim men, speaking in Punjabi, who are on a ruthless rampage gunning down everyone in sight, in the name of God, shouting “Allahu Akbar” after each act of inhuman violence. Portraying jihad without the context of its formation–which was aided largely by several western countries, and the state-sponsored brainwashing that accompanies it–is something Islamophobic narratives have done over and over again and, sadly, Hotel Mumbai ends up doing a lot of that. While Maras effectively adds nuances to the narrative and brings out the latent racism that fear breeds in people from the global west, there is really no redemption for Muslims here.

Hotel Mumbai is a great crowd pleaser but with a dangerously myopic narrative that, even with its flaws, serves a fitting tribute to the resilience of the people who lived and died through the terror attacks of 2008, but it definitely needs an audience which doesn’t believe everything it sees.

Hotel Mumbai premiered at the Toronto International Film Festival and opens on March 22.