TIFF Review: Glass Onion: A Knives Out Mystery is a Blast of a Sequel 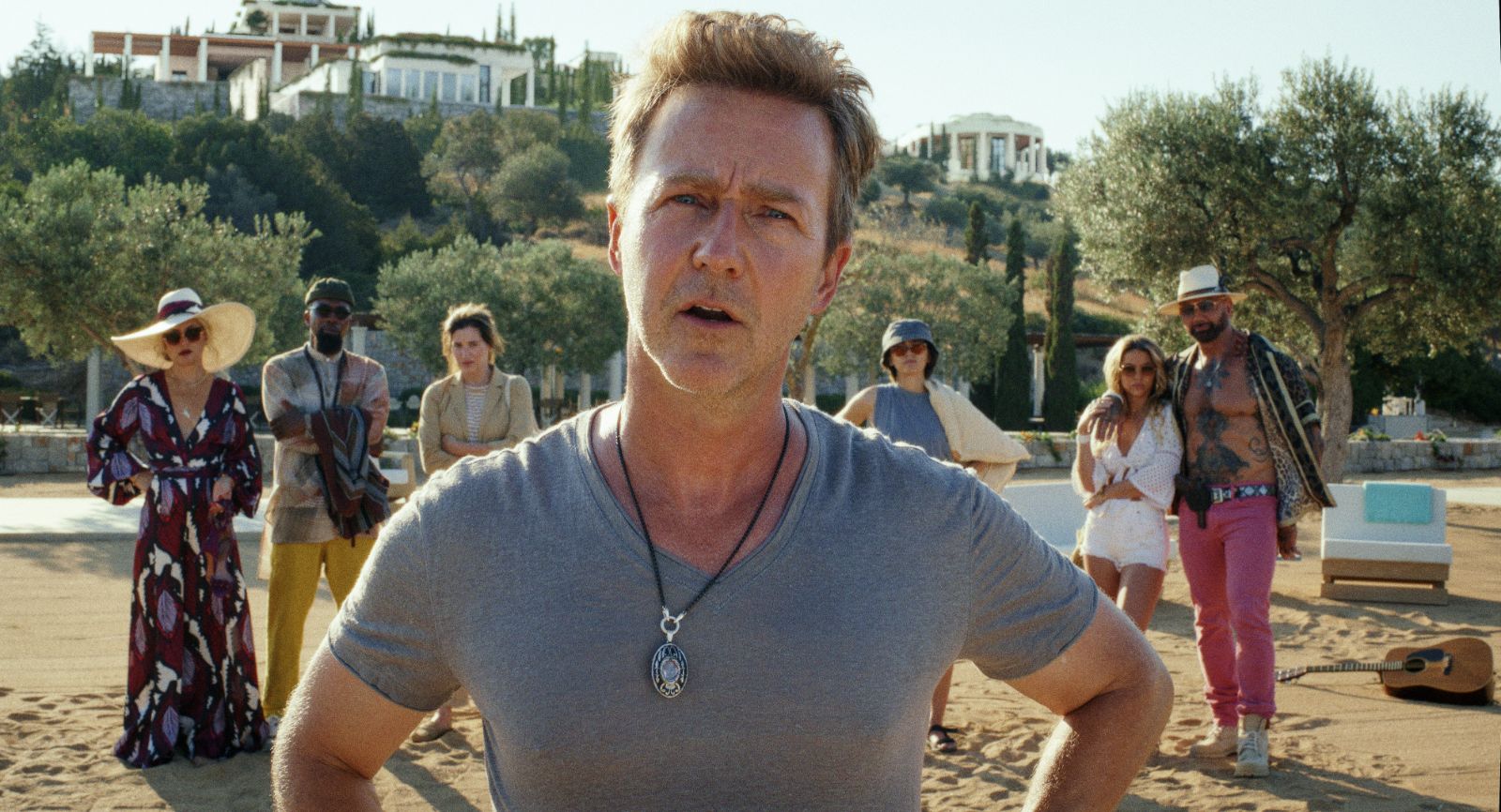 There was really only one way for Rian Johnson to proceed with Glass Onion: A Knives Out Mystery. The sequel to his 2019 whodunnit smash that introduced the esteemed Southern-fried detective Benoit Blanc had to be bigger in every way. There is indeed a larger canvas, as the film is set mainly on a private island in Greece. There is a more expansive mystery, featuring a diverse group of “disruptors”—or, as one character describes them, “shitheads”—with shared connections. There are multiple big-name cameos, one of them a cultural icon who passed away some months ago. And then, of course, there is the budget. Since the release of Knives Out, Johnson jumped to Netflix for a large payday.

The evidence of that payday is visible in nearly every shot. And why shouldn’t it be? After the success of his first film, Johnson has earned the right to strut. In addition to Knives, he has now tackled a high school murder mystery (Brick), a con-men romp (The Brothers Bloom), a dark sci-fi drama (Looper), and, of course, the still-controversial, wildly ambitious Star Wars: The Last Jedi. That is some major range and a serious sign of talent. Throughout his entire career, Johnson has maintained a winking charm. He is both above the audience and in on the joke. Never has that been more clear than in Glass Onion: A Knives Out Mystery, a film that delights in explaining to its audience all that they have missed, and somehow eliciting smiles rather than sneers. Some may greet such an approach with annoyance, but it is far more enjoyable to shrug one’s shoulders, smile, and go along for the ride.

It is best to view this with as few spoilers as possible, so discussing what works and does not is rather tricky. But it’s no spoiler to say that as Glass Onion begins we are deep into the pandemic and a group of colorful acquaintances all receive a seemingly impenetrable box from the mysterious billionaire. The complex box, when opened, is an invitation for a murder mystery weekend at tech titan Miles Bron’s private island.

These friends (?) are a fascinating and thrillingly cast bunch. There is Lionel Toussaint (Leslie Odom Jr.), a scientist on Bron’s payroll. Claire Debella (Kathryn Hahn) is the tough-talking governor of Connecticut and a candidate for the Senate. Birdie Jay (Kate Hudson) is a fashion designer whose life is literally an endless party and an endless series of gaffes. Duke Cody (Dave Bautista) is a Twitch star-turned-MRA icon. Hovering on the outskirts is Andi Brand (Janelle Monáe), seemingly a tech genius like Bron, but with a link to the group that slowly becomes clear. Then, of course, there is Miles Bron himself, played by Edward Norton as a figure who fancies himself a hippie-ish charmer. Also present is Birdie’s long-suffering assistant (Jessica Henwick) and Duke’s girlfriend, Whiskey (Madelyn Cline).

There is one more invitee to Miles’ magical mystery tour: the world’s greatest detective, Benoit Blanc. The timing of this invite is just right, as Blanc is aching for another case. Why Blanc is there, how the assembled group knows Bron, and what Johnson is up to here becomes apparent over the course of the nearly 2.5-hour film. Craig is, as usual, more than up to the task; the actor is as delightful, if not more so, than he was in our first meeting.

That the increase in budget and canvas hasn’t led to a better film than its predecessor shouldn’t be a total surprise. The formula is now set—Blanc must solve a crime featuring a wildly eclectic cast of characters. From frame one we have a sense of what Blanc will eventually pull off. How it happens is a joy, but it takes some effort to get there. The final stretch is a heavy lift and undeniably drags. While Glass Onion is not better than the 2019 outing, it is almost as enjoyable––a noteworthy victory in and of itself. Johnson has crafted a head-shakingly clever amalgam of Social Network-style corporate intrigue, a bit of Sondheim, Frank T.J. Mackey’s wardrobe and hair, and the music—and even winking spirit—of the Beatles. It is, at its essence, a blast to behold.

Near the end of a Q&A following the world premiere, an audience member asked if more adventures for Benoit Blanc can be expected. The answer, obvious to anyone who paid attention when Netflix signed Johnson and Craig for two sequels in spring of last year, was yes. After Glass Onion, one hopes that Johnson and Craig find room in their careers to even go beyond a trilogy. While the initial thrill in Knives Out experiencing the delight of seeing Craig’s Blanc unpeel the onion bit by bit is gone, Johnson is now tasked with the more difficult task of catching the audience by surprise with new mysteries and entanglements. Glass Onion proves he’s more than up to it.

Glass Onion: A Knives Out Mystery premiered at the Toronto International Film Festival before opening in theaters this fall and on Netflix on December 23.