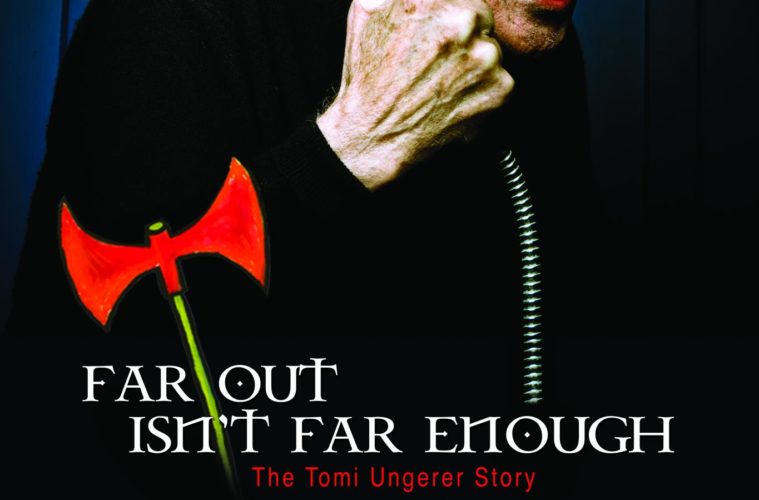 As easily titled by another of its subject’s mottos—”Expect the Unexpected”—as what documentarian Brad Bernstein chose, Far Out Isn’t Far Enough: The Tomi Ungerer Story re-exposes the world to one of its most influential illustrators/commercial artists. Disappointed by my own ignorance to the name, I looked up his work and discovered nothing but a passing resemblance to other children’s art I had seen before. Only when the late Where the Wild Things Are author Maurice Sendak came onscreen to laud his friend and peer’s bravery for inspiring him to create one of our most cherished pieces of literature did I fully understand the importance of Tomi Ungerer‘s legacy. In fact, the only reason The Mellops Go Flying, Crictor, and Three Robbers aren’t in my memory is America’s Puritanical shortsightedness figuratively burning them decades ago to spare me their ‘unsavory’ author’s proclivities. And I don’t use the Fahrenheit 451 reference loosely since this eccentric artist lived through his fair share of such tyranny. As Ungerer explains—everything truly coming from his perspective as just one Bernstein question is heard for the duration—his growing up in Strasbourg put him smack dab in the no man’s land between France and Germany when being far from both was the desirable home. Forced to speak German by the Nazis at the risk of being arrested four short months after being occupied—Tomi states a “knife on your throat is enough” to learn anything quickly—he watched his French heritage destroyed only to eventually see his victorious brethren do the same to their oppressors’ greatest works post-war. With such unthinkable cultural annihilation surrounding him, though, the German occupation did do one thing correctly. They encouraged his art every step of the way.

Ungerer’s history is key to discovering his identity and the anecdotes told about his Renaissance man father and strong-willed mother who stood up against the Gestapo are riveting if only to see Tomi’s clear blue eyes light up at the recollection. Despite any fondness, however, what really stuck was the pain and suffering inflicted. If there was one thing he learned through his tumultuous childhood it’s that youth needs to be traumatized. One needs to be afraid in order to overcome fear and move towards his/her future. As a result, this taboo breaking, anti-Saturday Evening Post auteur refused to pander to audiences like so many before had done. As he used his experiences to help earn astronomical success after arriving in New York City with only sixty bucks in his pocket back in 1956, he hoped to inspire new generations to conquer their adversary as well. While Bernstein happily depicts this acclaimed work recently achieving validation through the Hans Christian Andersen Award in 1998, he knows it’s not the most interesting tidbit within Ungerer’s tale. Constantly challenging himself to forever go one step further than his last victory, Tomi saw his art as a vehicle for change above education or aesthetic. We catch a glimpse of the brutality in his first piglet draft that caught the eye of publisher Ursula Nordstrom, understand his vitriol towards Southern segregation and the subsequent creation of his The Underground Sketchbook, and see the glint of the rascal within constantly having fun whenever talking about the smile a female’s butt makes or the simple illuminating declaration that without sexual intercourse—his word was more vulgar—his contemporaries wouldn’t have the kids necessary to read their work and pay their salaries.

His choice of verbs regardless, the temper he himself knows is uncontrollable can’t compare to the reactionary, grotesquely cruel and uncensored work drawn when off the clock from personifying snakes and alligators. A book about technological machinery replacing the flesh with unemotional sexually expression called Fornicon holds pen and ink pieces projecting a marriage between Pink Floyd‘s The Wall artist Gerald Scarfe and H.R. Giger and yet isn’t even his most salacious work. Amp up the conversation with strong political upheaval through anti-Vietnam War propaganda posters portraying so much with so little and it’s a wonder America’s parents didn’t revolt earlier than the verbal attack and blacklisting which eventually ripped him from the annals of youth literature altogether. He leaves it all out in the open too—the pain his fall from grace inflicted after those with critical voice and power snatched his freedom of expression away as well as the joy of speaking about personal influences like Matthias Grünewald and Saul Steinberg. But no matter the storm brewing in his head as ideas fight tooth and nail to come out through his fingers and brush, Tomi’s genuine smile never wavers as he lives to the fullest of his abilities with every breath. Ungerer was one of the first to show us our kids weren’t innocent, vacant, and mindless rabble to be coddled and ruined by delicate hands. Between strengthening our youth through fright and telling our elders erotica was more beauty and fun than filth, Tomi speaks the truth no matter the consequences.

His adventure takes us from the frontlines of World War II to NYC to Nova Scotia and eventually Ireland before settling down to start a family—seen and heard through his voice and friends like Sendak and Jules Feiffer. More than words, though, one of Far Out‘s best attributes comes from the brilliant animation work by Corner Of The Cave Media. They bring Tomi’s work to life through moving sketches, thrusting pelvises, and real time brushstrokes in the air, each pausing statically on a photograph of the real piece hanging in places like the Musée Tomi Ungerer in Strasbourg or The Eric Carle Museum of Picture Book Art in Massachusetts. It’s a gorgeous flourish to accompany the already animated visage of a candid and courageous man teaching us that nothingness is merely a void waiting to be filled.