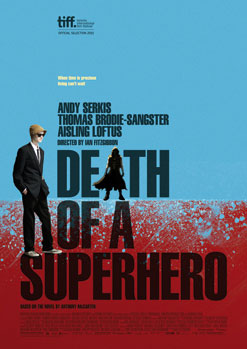 [TIFF Review] Death of a Superhero Cancer is one of life’s great fears, a grand equalizer that takes without discretion. Children are lost while their parents watch, talents with the ability to make a difference in the world leave us before their impact can ever be felt, and loved ones pass when after we told ourselves we’d have so more time. For the person dying, however, the outlook becomes both bleaker and brighter. Sure, they are angry with God or whomever they blame for putting them in their impossible position, but there is also something to be said about the calm acceptance of death. While family and friends cry in a natural outpouring of emotion, they force the dying to console. But watching someone young accept their fate isn’t the same as standing by while they give up. Sometimes it is through the knowledge of the inevitable that we can truly live. It’s through our mortality that we become immortal.

And I believe this is exactly what author Anthony McCarten was trying to portray in his book and screenplay for Death of a Superhero, screening at the Toronto International Film Festival. A cross between the angst-ridden psychiatry sessions of Good Will Hunting and the animated fantasy world manifested within a suffering mind from “The Maxx”, director Ian Fitzgibbon finds a way to take audiences inside the mind of his lead character. Donald Clarke (Thomas Brodie-Sangster) is a good, smart, and talented young man on the cusp of his own destruction. Living between the worlds of anarchy and love, he tries his best to cope with his lack of a future while those around him want to fill him with hope. But hope is the last thing Donald needs. He wishes they could let go; he wants to know they will be alright without him. So he acts out, paints graffiti, and walks on the edge of a suicidal blade to hopefully wake up the world. His mind is clear and he’s ready to go.

Well, maybe not completely ready. As the animations of his autobiographical comic frames inject themselves into the film’s real world, we see Donald’s struggle between life and death, sex and love, darkness and light. Constantly on his heels and awaiting his demise with gleeful grins, The Glove and The Nurse both follow his every move. They integrate with his surroundings or stay in the background, talking through his own fear behind people still full of life. In that alternate world Donald is a superhero saving lives selflessly as he bats away the advances of female hoards throwing themselves his way. To be a hero means forsaking a life of pleasure and acclaim; he doesn’t do it to be honored, but because he must. He doesn’t know at the start, but Donald will eventually need to become that hero in his world too. Overcoming The Glove in fantasy is conquering the last remnants of fear he’s harbored in life. Without it he can finally save the souls of those attempting to do the same for him.

Even though Donald is the one dying, his doctor, parents, brother, and friends have become just as lost. Their ‘help’ leaves the boy in more pain, reliving their anguish each and every day. Of course death follows him in the guise of his creations, it’s inescapable and trapped within the eyes of all he holds dear. This is way he’s gone through five shrinks, the same old bullshit fed to him becoming white noise without substance. Being the bad boy in school is tough when you’re the bald, sick kid in the corner with his nose buried in a sketchbook. But outside that sphere, when with the adults spewing false hope and niceties about a life you’ve reconciled is a pipe dream—all bets are off. Like Good Will Hunting before it, such a disgruntled boy needs an equally strong and understanding ear. Only with Dr. Adrian King (Andy Serkis) does Donald find a kindred soul to converse. When together they are equals, he never panders to the boy and Donald never holds back his aggression in response. Themes of control run rampant as everyone wishes to have it over the inevitable. Mrs. Clarke (Sharon Horgan) copes by using organic food and antioxidants for meals, crying every chance she gets; Mr. Clarke (Michael McElhatton) decides to give into the illness and be there through thick and thin, his own visible fear making him more friend than Dad; and his brother (Ronan Raftery) and friends do what high school boys will, devise and plan to get Donald laid, hormones throwing priorities out of whack. And this is all while Donald in effect laughs at them snidely through personalized t-shirts, my favorite being “One more PET Scan and I’ll glow in the dark”. Only Shelly (Aisling Loftus) refuses to treat him like a delicate toy, her own hard life letting her see through the clutter and acknowledge what truly matters. Their relationship is by no means ordinary, but they bring each other something neither had ever experienced—someone who sees them for who they are and not who they should be.

It’s a touching story of heartbreak that Fitzgibbon handles nicely, the crude animation its only distracting point of contention. But it’s there for a reason, so Donald can prove he can save his own soul alongside the innocent victims he draws. No matter how ready or how naïve he is to think killing himself is control, only anger will survive until he’s able to give into his monsters. Death isn’t a free pass to walk the Earth disrespecting the gift of life; it is an escape from the unknown to continue on without fear. And Brodie-Sangster embodies these sentiments throughout his performance, showing anger, joy, frustration, and eventually love. To be the superhero of his dreams, he must find a way to let the others continue living for him. By giving into his own emotions to finally comprehend his fight is for them and not his himself, Donald becomes their savior. A martyr to those who’d rather wallow in the depression of death, it’s through his passing on that they all regain the ability to live.

Death of a Superhero plays at the Toronto International Film Festival on September 10, 11, & 17.