TIFF Review: ‘Color Out of Space,’ Featuring Nicolas Cage at His Cage-iest, Feels Beamed from Another Planet 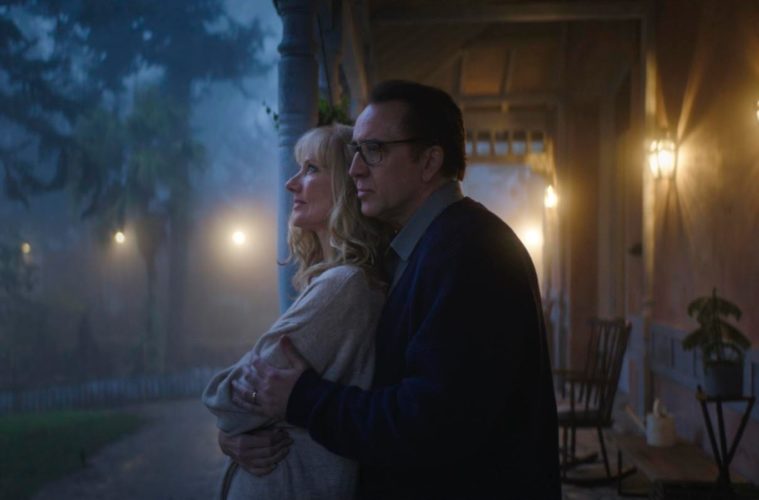 Color Out of Space has long been one of H.P. Lovecraft’s scariest stories and central to that is its focus on a fear of not just the unknowable but the intangible, the things happening all around us all the time that we can’t even begin to perceive or comprehend. Lovecraft himself saw the story as a direct confrontation of contemporary sci-fi writers who thought of aliens in terms of human physicality and organization; a rebuke of the idea that when contact is made that we could remotely understand or be understood.

This is precisely why South African genre filmmaker Richard Stanley was an excellent choice to adapt it. Before being sent to director’s jail for the notoriously troubled production of The Island of Dr. Moreau in 1996 (which saw John Frankenheimer relieve him of directing duty) Stanley directed two of the most genuinely idiosyncratic genre movies of the 1990s: Hardware and Dust Devil. The former is a frenzied cyberpunk dystopia splatter film that exists at the exact intersection of Mad Max and The Terminator and the latter an African spaghetti western with hints of mystic horror but what both have in common is an interest in the inexplicable.

And what other word is there that could possibly describe a movie about an amateur Alpaca farmer (played by Nicolas Cage) who screams about and is driven into madness because of colors in the sky? It is absolutely as absurd as it sounds, the short story is too, and that’s honestly part of why it’s scary. H.P. Lovecraft may have been one of the most humorless (frequently racist) writers on the planet but he could occasionally find himself veering in the direction comic strangeness on pure imagination alone.

It all begins with a meteor that falls to earth and lands on the New England farm property of the Gardener family, located just outside of Arkham, the fictional Massachusetts town featured in many of Lovecraft’s stories. Stanley establishes the family as weird but in a quirky and functional way. There’s the father (Nicolas Cage, at Cage-levels so high it honestly makes Mandy look restrained) who likes bourbon and is a bit insecure about his recent decision to buy Alpacas for the farm that serve no function; the mother (Joely Richardson) who supports him by working from home; and their three kids (Brendan Meyer, Madeleine Arther, and Julian Hilliard) who share farm duties in between exploring their interests own in occultism and NASA. However, that meteor brings with it a strange beam of colors that begin to infect and permeate their surroundings, creating a constantly mutating sense of biology, psychology and time. Days begin to bleed into each other, new plants and bugs begin to appear, the crops grow big and juicy but ultimately rotten on the inside, animals go missing and reappear in misshapen forms and the already eccentric Nicolas Cage is pushed to places he genuinely hasn’t been since the comic mania of Vampire’s Kiss.

Stanley approaches this narrative with a true sense of wackiness, really leaning into the ridiculousness of the daughter riding her horse through ancient New England forests with Satanic tattoos like she’s in an 80s fantasy film or Cage yelling about milking Alpacas at the local water surveyor for some reason. No people would act the way they do in this film and each of the actors honestly feels like they’re in a different film from one another, creating this disorienting, meta comedic effect which might seem like an odd choice for horror but if anything, it is so strange it registers as if we are watching a transmission beamed in from another planet.

Everything that’s peculiar before the colors contaminate them is then exacerbated and we are greeted with an escalating sense of delirium as the wordless, psychedelic carnage of the alien creature whose feelings, motives and/or consciousness we are never made privy to. It’s conceptually very creepy and the combination of absurdity and the beautiful but very artificial CG effects gives this a frequently disarming lightness before its pivot into the kind of slimy, textured body horror that would make David Cronenberg squirm.

The horror images are brief but sharply detailed and unsettling nonetheless; they are constantly entwined with the ridiculousness of the situation and the performances. Despite a direct reference to John Carpenter’s The Thing (a grimly funny one at that) what this honestly more closely resembles once it gets going is the batshit insane cinema of Brian Yuzna and Stuart Gordon; right down to the perverse, frequently comedic bodily suffering. Imagine Nicolas Cage starring in From Beyond and you have some idea of you’re getting from Stanley here.

Similar to Hardware and Dust Devil, the less said about the phantasmagorically abstract, expressively incoherent finale the better but needless to say Stanley weaponizes reverberating synthesizer effects, psychedelic lighting, and images of crazed performers, mutant hybrid creatures/vegetation, TV static, occult rituals (there was an occult consultant on this movie!) and visual smearing effects before the movie lights itself on fire right before our eyes and all we’re left with are ashes, and the memories of what they once were.

The final result is a movie that feels as paranoid, cruel, ludicrous and radiation-poisoned as its characters; the kind of movie that is on an irregular and grotesque wavelength of its own making and will leave people not just in disbelief about what they just saw but what any of it meant, if it meant anything at all. As the narrator at the end of Lovecraft’s story remarks: “What it was, only God knows.”

Color Out of Space premiered at the Toronto International Film Festival and opens on January 24.