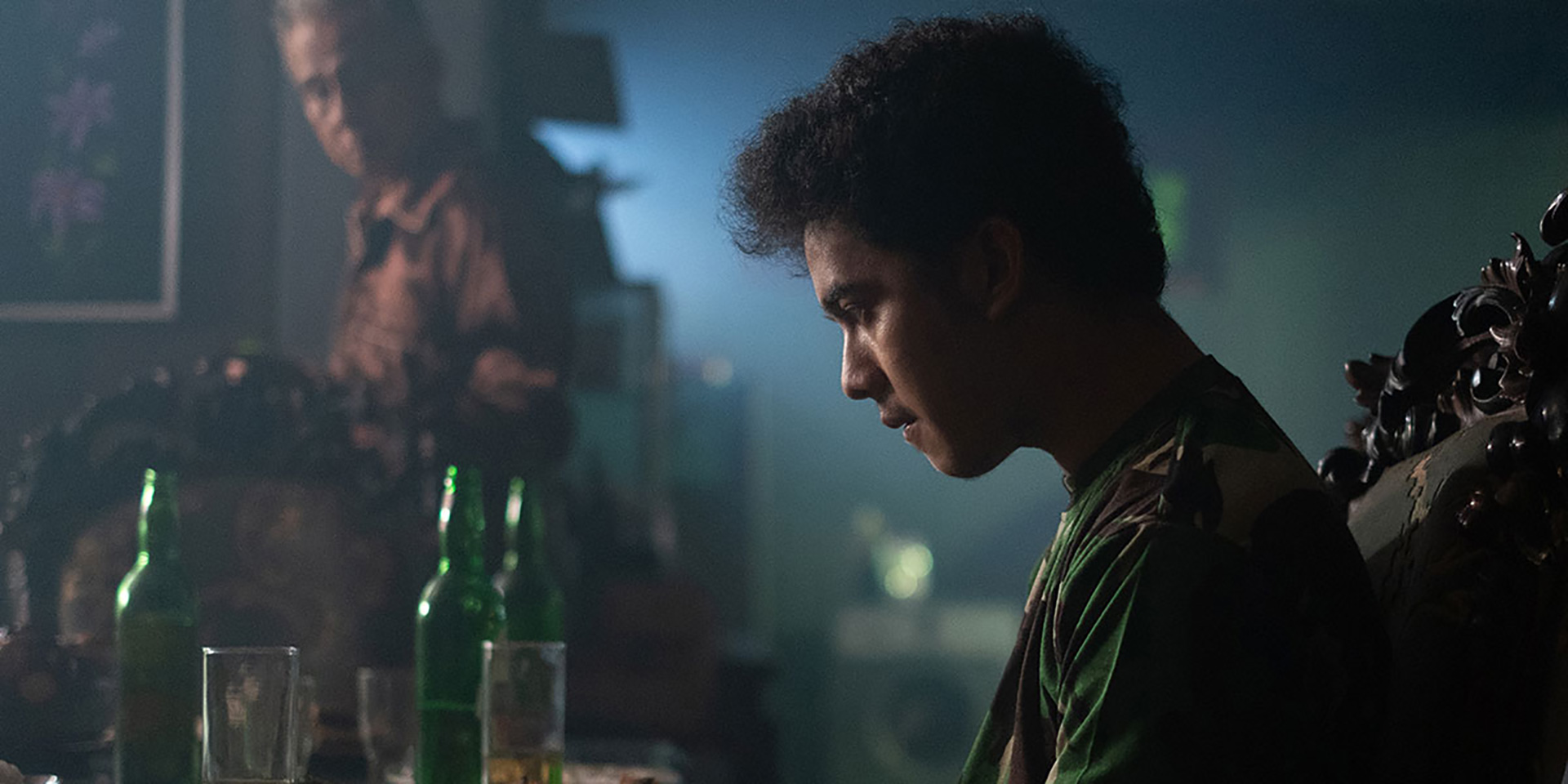 General Purna (Arswendy Bening Swara) never had a son, so returning to his mansion to ready for a reelection campaign (the days of military dictatorship in Indonesia might be over, but the power structure surely isn’t) makes him grow sentimental at the sight of young Rakib (Kevin Ardilova). The boy is the youngest son of Amir (Rukman Rosadi)—a man Purna calls a “friend” despite their relationship truly being one of employer and employee. It’s been that way for three generations with Amir’s father serving Purna’s father, grandfather for grandfather. So, no matter how progressive the nation believes itself to have become, the townsfolk still fear what Purna represents. And if that authority allows Rakib a comfy existence as his servant/chauffeur, why not make the best of it?

Writer/director Makbul Mubarak titles his portrayal of these two men Autobiography not because their story mimics his own, but because he’s wielding the film as a metaphor for the autobiography of his homeland. The power struggle between military and citizenry. The duplicity of those in control feigning democratic rule despite maintaining their iron fist. And the loyalty demanded of all who wish to flourish rather than merely survive beneath it. Rakib is at a convergence point of past and present: born of the servant class yet guarded and taken under the wing of a titan. The closer Purna lets him get, the more emboldened he becomes. Rakib likes the comfort of immortality and watching those who treated him as an inferior suddenly run at his beck and call.

And why not embrace this newfound influence? Rakib also feared the General when he arrives, knowing it had been coming and worried because he’d have to assist him by himself. His father is in jail for sabotage (an act Purna says he could have helped with—maybe genuinely, but probably just words now that he doesn’t have to prove he would have) and his older brother smuggled abroad to work in Singapore. So, Rakib is hardly itching to defend them or not find himself amenable to Purna’s excesses. Maybe the General isn’t as bad as he was told either. He hasn’t seen any untoward behavior. Purna has shrugged off debates at times (specifically with Yusuf Mahardika’s Agus at a town hall), but that’s what politicians do.

All Rakib needs to fully jump into the deep end is to experience how Purna handles an incident where they were unquestionably at fault. Rakib was driving the General around when he accidentally backed their SUV into a mosque. The citizens were justifiably enraged and ready to drag him from the vehicle when Purna exited to reveal his infamous face. They all quiet down to silence—afraid of what the repercussions might be towards them for daring to accuse anyone associated with their leader as being in the wrong. The General tells Rakib to apologize before they continue on their way, smiling about the power of an apology to smooth over even the worst of emotions. What the boy doesn’t understand is that it doesn’t work both ways.

Is Rakib’s apology truly accepted? We can never know considering Purna stood over his shoulder, defying any of them to be brave enough to reject it. Rather than contrition, Rakib saw the strength of intimidation. So, he doesn’t think twice when telling the General that he can uncover the identity of a vandal who destroyed his campaign posters. Rakib wants to facilitate a meeting—give the wrongdoer a chance to say he was sorry and let bygones be bygones. Because of how his experience with Purna has gone so far (smoking together, playing chess, and learning to shoot), he doesn’t think twice about how poorly such a closed-door confrontation might go. It’s then that Rakib sees the real Purna and discovers his comfort comes at an impossible price.

It’s a brutal awakening. We spend half the movie watching this kid fill out his shoes once the General’s clout is firmly at his back only to revert to that rightfully frightened boy wondering whether his presence and duty as Purna’s employee inherently renders him complicit to monsters. You can’t have your cake and eat it too. Rakib can’t pretend he’s just another regular Joe like Agus once he embraces the swagger and control of being known as the General’s man. Because it’s not just about eating better food in the back room when meeting with other residents. That respect isn’t for him. It’s for Purna and the knowledge that a slight on Rakib has becomes a slight on him. He is nothing without that shadow’s implicit protection.

Both Ardilova and Swara are very good in their roles. Neither character wants to rock the boat, but their assumptions about the other guarantee the journey must get rocky anyway. Purna wants to treat Rakib as his son and he figures the perks of being in that role will be enough to get him to fall in line without overstepping its specific boundaries. And Rakib wants to treat Purna as his father—a man who demands respect and would never find himself locked away like Amir. To confuse the illusion of democracy with actual law and order, however, is a gravely naïve mistake. Because while Rakib is supposed to adhere to boundaries Purna enforces, the General himself is boundless. Unless one of his own courageously defies his dominance.

The back half of Autobiography ratchets up the suspense due to Rakib finally seeing behind the curtain. He thinks he can bide his time and escape like his brother did, but that would mean accomplishing a series of betrayals without anyone watching. Just like Rakib played lookout for Purna where it came to the vandalism, however, hundreds of others do the same. Because military rule never quite went away. If the army holds allegiance to their generals despite their ranks morphing to public office, the people remain helpless. Yet those who do find the strength to fight for their freedom also run the risk of becoming that which they cut down since absolute power corrupts absolutely. Replacing your oppressor without systemic change only alters the face barking orders.

Autobiography screened as part of the Toronto International Film Festival.