TIFF Review: ‘1982’ Shows the Reverberations of a Divided Lebanon 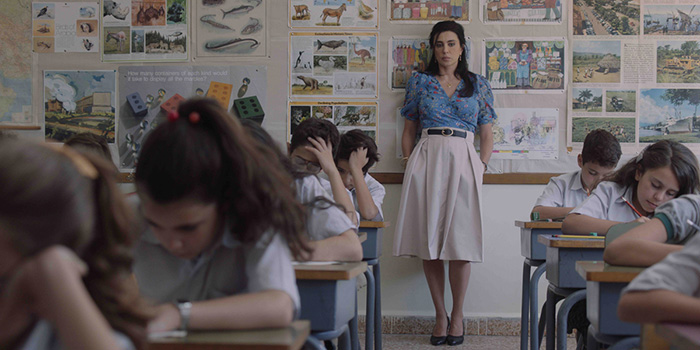 Before 2007, all Lebanese men were conscripted to serve in the military for at least one year. I’ve heard from multiple people that it wasn’t a question of citizenship, but ethnicity. If I ever visited before that year, I wouldn’t have been able to return to America without fulfilling that obligation. Whether or not this was actually true—I’m not certain. But even if it wasn’t, all the children born there during a lengthy civil war against Syrian occupation and an eventual Israeli invasion would. So it’s not enough to just watch Oualid Mouaness’ 1982 as a portrayal of futility. Beyond living through a reality that your home was under siege by two foreign parties, many of these kids would be forced to join the fight as well.

It’s crazy to think this truth manifests overnight, but that’s exactly how wars of this nature start. First you think you’re safe because Beirut is far from the frontline. Then you hear on the radio that forces have entered the south and taken hold. Next the sonic booms of bombs in the distance are replaced by explosions close enough to see smoke. And when fighter jets appear in the sky with heavy artillery flashing between them, there’s suddenly no more room to delude yourself that war isn’t here. Mouaness lived through it himself as a young boy attending an Anglophone Quaker school in the nation’s capital. One second he’s taking exams and dreaming of summer. The next wonders if his home was destroyed during the bus ride back.

How do you deal with that? It’s a question that reverberates well beyond elementary aged children to the adults tasked to protect them. Mouaness doesn’t seek to make his job easier by glossing over this complexity. On the contrary, he leans into it since Lebanon is a land of many religions and cultures with schools that also teach French and Arabic depending on your family’s preference (via economic standing and influence). The civil war itself is a product of this as the creation of Israel displaced many Palestinians and in turn brought the Palestine Liberation Organization (PLO) along with Syria to rally Muslim Lebanese to their cause. The Maronite Christians were conversely on the other side facilitating the Israel Defense Forces’ (IDF) invasion. 1982 saw the country divided.

Showing this division amongst the adults makes sense because everyone must choose a side. For one of the school’s teachers (Nadine Labaki’s Yasmeen), however, that choice comes down to family (her brother Georges, played by Said Serhan, enlists as a Christian) and romance (her boyfriend Joseph, played by Rodrigue Sleiman, sides with the Muslims). The war is thus personal for her because it’s now about whether her brother lives and whether her relationship endures. She can no longer sit on the fence in the hopes everything blows over without affecting her sphere of existence. And regardless of which side she picks, the scared children under her care must be evacuated first. Where their parents take them afterwards isn’t in her control, but ensuring they get home safe is.

Yasmeen isn’t the only one confronting love and politics, however. Little Wissam (Mohamad Dalli) is too despite not necessarily being cognizant of it. Being that this is the second last day of exams, he’s mustered the confidence to leave an anonymous love note in Joana’s (Gia Madi) locker. More than merely a cute declaration, this correspondence risks him getting into trouble with conservative authoritarians who label such displays lewd and inexcusable. And it also forces him to become aware of the dissimilarities of their families on opposite sides of the “Green Line” with him living in East Beirut (Christian) and she in West (Muslim). With physical checkpoints and cultural ones between them, Joana sharing Wissam’s feelings won’t be enough. This war could mean never seeing each other again.

The dramatic layers of what we know is coming therefore color every single action with as much danger as melancholy since Mouaness has literally placed us at a point in time where Lebanon becomes irrevocably changed. Those who were friends, lovers, and co-workers find themselves saying goodbye for what might be the last time as a mass exodus commences in tandem with an economic failure (many families with means quickly fell out of the middle class once the currency devalued). Some are able to cope by living in the moment (Aliya Khalidi’s school secretary Ms. Leila is doing her best to keep cool under pressure as parents flood the phone lines) while others struggle to ignore the chaos around them. Puppy love is the least of anyone’s worries.

So while Joana can’t squash the tears from not knowing if her family is okay, Wissam lets his imagination run wild to manifest the giant cartoon mechs he draws as heroes putting an end to the artillery fire causing his anxiety to raise. Class tattletale Abir (Lelya Harkous) finds herself silent and non-judgmental for the first time all day and Wissam’s best friend Majid (Ghassan Maalouf) finally stops lurking in the background as a voyeur to start fighting for what he wants. These kids might not have a full grasp on the situation that’s unfolding, but they definitely understand how precarious things have become in order to exit their shells. They awaken their desires while the adults gradually shutdown, knowing that nothing will ever be the same again.

That’s some potent subject matter—especially today with so much animosity born on cultural and religious lines. At a certain point everyone must open his/her eyes to the reality around them whether they’re impacted today or not. Safety is but an illusion that’s often predicated on an implicit notion of impermanent privilege. To attend a school like that which Mouaness depicts is to live with a comfort others lack. The fear turning an affluent populace known for pristine order into an excitable mass of individuals running wild isn’t therefore to be diminished. Nationalism only ever goes as far as personal desire. Yasmeen is right when she says both sides are ripping her country apart. Both want control and will destroy whatever lies in their path to take it.