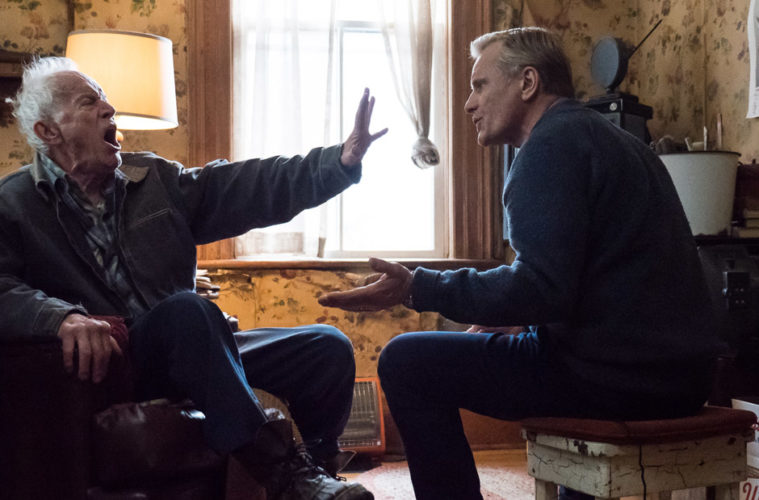 Carving out a career that seems wholly based on personal taste rather than following the whims of what an audience may enjoy, Viggo Mortensen earned ubiquitous recognition as Aragorn, and then followed it with no shortage of fascinating projects, from his stellar David Cronenberg collaborations to Lisandro Alonso’s masterful Jauja to John Hillcoat’s pitch-black, bleak tale The Road. He’s now embarked on his feature writing and directing debut Falling, telling the story of a man’s difficult, life-long relationship with his asshole of a father. Hewing more towards the simplistic nature of Mortensen’s recent acting roles, the drama is undeniably earnest in its approach, both when it comes to the one-note script and the plain yet tender direction. Mortensen is clearly attuned to the emotional toll of maintaining such a relationship—loving someone even if they don’t show any love back—but once this idea is firmly laid out early on, the repetitive narrative doesn’t expand to reveal more layers of complexity.

The most ambitious element of Falling is the structure, continually flipping back and forth between the past and present. Mortensen details an early ‘60s upstate New York upbringing with his character’s loving mother and hardscrabble father. This is juxtaposed with a present-day trip accompanied by his elderly father, who currently lives an isolated, difficult life tending to their family farm. Dementia is setting in for his father and as his son, John, Mortensen needs to remind him that his trip to the west coast where his children now reside is to find a place to relocate to. Playing his father, Willis, Lance Henriksen commits fully to the grueling role, which carries with it a non-stop barrage of obscenities and racial slurs, buried deep into his soul after being birthed into an America that was despicably rooted in a xenophobic perspective.

Despite how John may try to open his father’s eyes to a changing, progressive world, this isn’t a film in which he comes to realize his errors and becomes a more empathetic human. From the first frame to nearly the last Willis is an unrelenting terror, making fun of John’s husband, who works as a nurse and the rest of the family. This includes John’s sister Laura Linney, who briefly appears and feels strangely miscast. Her character’s bright and bubbly demeanor isn’t new for the actress, but she feels out of step in trying to smooth over the vileness Willis stirs up at a backyard meal and clashes with the more patient rhythms Mortensen is exploring. This unceasing torrent of unpleasantness makes Falling a hard film to fully embrace, even if it’s impressive to see Henriksen so fully devote himself to such a nasty character. In between the darkness, there are a few moments of levity. “When a guy my age thinks he has to pee, he already did,” Willis says, earning a laugh.

As a writer-director, Mortensen shows a clear-eyed vision–if a bit too much on the clear side. For an artist who has hands in so many different mediums, he plays it a bit safe with unadorned cinematography aside from a few nice Malickian montages. A treacly piano score playing over the most obvious of dramatic moments is also over-deployed. On the editing side, some welcome experimentation is brought to the table. As we jump around time periods–sometimes shot by shot inside a scene–we see how past traumatic moments of smoking and dinner ordering inform the present. In one elegant sequence, we see how the snow falling on the wedding day of John’s parents is recalled later in his life with new meaning. The script is also sprinkled with a few well-considered observations. On the day Willis brought his son home, he remarks how strange it is that he brought him into this world so he could die. Later, his wife continually wishes he would just take off his shoes when he comes home, which he never does, leaving her to pick up the dirt and planting the seeds of the inattentiveness that will end up destroying their marriage.

In the present day, as Mortensen’s character puts in his daily effort to give his dad a decent life and the benefit of the doubt, they meet a few interesting characters. He may not be dreaming up any new directorial collaborations with Mortensen, but David Cronenberg steals a scene as a doctor who gives Willis a rectal exam and nods to his bodily fascinations, clearly enjoying the procedure as he slips on his purple gloves and dives in.

Even if Mortensen has said this isn’t really an autobiographical film, Falling wears its heart fully on its sleeve, so much so that it loses a bit of complexity. The one-note, plodding narrative is meant to trap us with a despicable person, and that frustration is felt as much in Mortensen’s character as it is on the part of the viewer. As the film builds to a more outwardly dramatic climax, there’s not a whole lot new learned along the way. A crotchety, racist old man only vaguely learns his lesson and we surrender to the miniscule character arc that takes nearly two hours. One gets the sense that Falling is a film Mortensen wanted to get out of his system before moving on to something a bit more daring. Let’s hope we’re not mistaken, because with his debut he shows mindful consideration behind the camera telling a story that’s not terribly interesting.