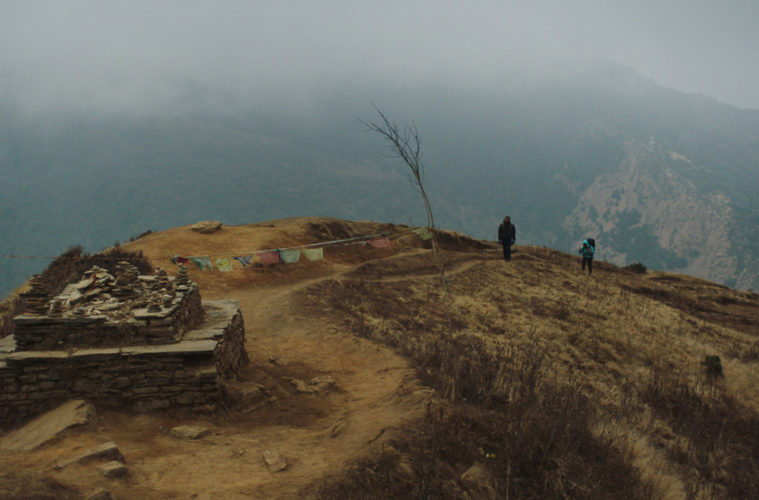 If a mountain-climbing adventure like Everest or Vertical Limit removed its bombastic thrill-seeking setpieces and was instead directed with the patient, reverent eye of Apichatpong Weerasethakul one may conjure up something like The Mountains Are a Dream That Call to Me. Cedric Cheung-Lau, who established his career on the lighting teams of A Girl Walks Home Alone at Night, The Mend, Little Men, and more notable indies, makes his feature directorial debut with this peaceful, meditative journey through the Annapurna Mountain range in Nepal. Compact in narrative scale, but as epic as one can imagine in terms of capturing the awe of the gorgeous environment our small set of characters traverse, the film is a meditative testament to appreciating one’s surroundings in all their glory.

Hannah (Alice Cummins) is a visitor from Australia in her twilight years on a journey of self-discovery. She encounters Tukten (Sanjaya Lama), a young man from Nepal embarking on an adventure before he heads to Dubai. As their paths criss-cross, we witness glimpses of their perspectives across these vast summits. Most other character details are gleaned from what we perceive, not hear in any dialogue, as the journey that unfolds is one of reflective reverie. Take a nighttime, dialogue-free scene in which Hannah is getting undressed after a long day of hiking. Without speaking a word, we see her weathered body eased into some rest as if this climb is a culmination of a life’s work, saying more about self-healing in a single sequence than the trite cliches of a soul-searching film like Eat Pray Love can reveal in their runtime.

As I imagine is intended, the mind will wander throughout the journey, which leads one to reflect on the genuinely awe-spiring wonders of the world. Despite a few touches of surrealism deep in the forest (perhaps in a nod to the aforementioned “Joe”), the director captures these experiences with a relatively straight-forward simplicity in both script and style, as if to not distract from the natural marvels at hand. As our attention glides in and out, one may even consider how the average Hollywood tentpole uses locations like this to merely earn some tax credits and get a few establishing shots in between the action, making Cedric Cheung-Lau’s approach all the more impressive. By relying almost entirely on sustained master shots–whether during the magnificent journey or in an eatery in the middle of the night–we’re serenely guided through this world with a careful hand and able to let our mind luxuriate in its beauty.

With striking cinematography by Jake Magee, the camera often reveals a bird’s eye view of the surroundings, playfully giving us time for us to try and spot Hannah as she traverses across footbridges, massive summits, and stunning valley vistas. One of the film’s many pleasures during the climb, with pauses for moments of rest and relaxation, is the tender humanity on display with those she may meet on the journey. There’s an open-heartedness and kindness in every interaction that adds to the tranquil nature of the film. The ways in which Mountains is obstinately spare in narrative progression will certainly turn off some viewers, but from the very first shot–as the camera patiently glides across this vast mountain range before settling on something utterly breathtaking–one will know if they are under this film’s spell.

Laying its aims out in the title, The Mountains Are a Dream That Call to Me will put one in a dream-like trance as we witness Hannah and Tukten’s intense captivation in experiencing these staggering testaments to the heavenly beauty of the environment. If taken at a quick glance, one may reductively relate the viewing experience to that of a beautifully-photographed nature documentary, but that would not be giving proper appreciation to Cedric Cheung-Lau’s calm, transcendent eye for the sublime.

The Mountains Are a Dream That Call to Me premiered at the Sundance Film Festival.