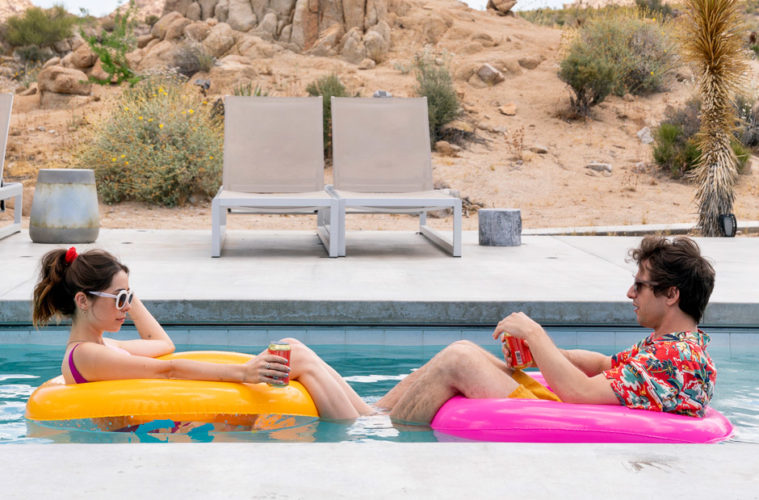 When Bill Murray repeatedly wakes up on the same morning in Groundhog Day, the radio blares Sonny and Cher’s “I Got You Babe.” It’s a winking reminder of what’s missing in his life, an auditory motivation to change his circumstances and escape his cyclical prison. When Andy Samberg wakes up on the same morning in Palm Springs, it’s his cheating, airhead girlfriend Misty (Meredith Hagner) that forces his eyes open. She’s a cold reminder of the relationship he wants to leave—except in his time loop, he’s given up on escaping at all.

It’s unclear how long Nyles (Samberg) has been stuck on the same day. Out in the desert, attending a stranger’s wedding over and over, he’s grown tired of looking for an exit and has leaned into his inconsequential lifestyle. He floats in the pool with beachwear, cracks open too many beers and settles into his usual malaise. At the reception, he gives a hilariously drunk, incoherent toast, which one particular night catches the attention of Sarah (Cristin Milioti), the sister of the bride, and the two sneak out to fool around. When a crazy archer named Roy (J.K. Simmons) emerges from the dark, shooting arrows at Nyles, he makes an escape towards the orange glow of a nearby cave. He urges Sarah not to follow him in, but she doesn’t listen. The next morning, she wakes to find she’s been sucked into the same time loop.

What Harold Ramis started with this purgatorial storytelling device in 1993 has persistently been repeated and updated over numerous genres. Most recently, Edge of Tomorrow added a sci-fi twist, Happy Death Day provided a touch of horror while the Netflix television series Russian Doll played with multiple, separate loops. Tweaking the formula Max Barbakow’s Palm Springs sets Nyles and Sarah together, which leads to some fun and risky storytelling opportunities.

Initially, this is a terrible proposition for Sarah, who desperately searches for ways to escape her cycle, drinking heavily at the reception for reasons explained later. Nyles has become resigned to an existence of suffering, meaning she has to recalibrate his approach to life. Of course, that includes some shenanigans, too, adding punches of humor amongst Sarah’s existential dread (like when the duo enters a dive bar and begins a coordinated dance). Their relationship isn’t inherently sexual, which means the movie cares about their conversations, their witty and occasionally philosophical ideas and their plans to subvert their daily prison. The script, from Andy Siara, never loses momentum.

That’s because for most of its runtime, Palm Springs doesn’t get bogged down by extemporaneous storylines and marginal characters, traits that often plague small comedies like this. In a lesser script, the movie might have put more people into the time loop, diverting attention away from its two leads. It might have veered onto a coarse detour and shifted the tone. Barbakow knows what he has in Samberg and MIlioti, and he rarely lets competing sidebars lead the movie astray.

Samberg is playing someone formed in the Apatowian mold, a harmless slacker with heart that requires a woman to shake him out of his resignation. Milioti is up to the task, trading comical barbs at an equal rate, but also because her earnest attempts to talk about her life feel sincere and congruent to their dynamic relationship. At one point, dozens of days into their purgatory, Sarah contends that despite their meaningless actions, they’ll still remember them when nobody else will. “Ignoring the past means you’re destined to repeat it,” she tells him.

Perhaps those that are happily married might never be stuck in a time loop. Within pop culture, quantum mechanics have a knack for making single, miserable people their test subjects, and preaching the values of finding someone to shake out the mundanity. Palm Springs isn’t a didactic movie like that, but it does consider how Nyles might have approached his life had he already been in a fulfilling relationship. Would he change his behavior and his priorities?

Though it takes place at a wedding, Barbakow isn’t suggesting that coupling can cure a floundering life. He’s showing what it’s like when something finally clicks, when two people realize they want to share their lives together. For Nyles, enjoying the bachelor life with an attractive woman, an open bar, and free dinner over and over doesn’t seem like a terrible decision on paper. It’s definitely the safer choice to make. Palm Springs sensitively suggests that tomorrow—and all of its uncertainty—is a risk worth taking.

Palm Springs premiered at Sundance Film Festival and will be released by NEON and Hulu.