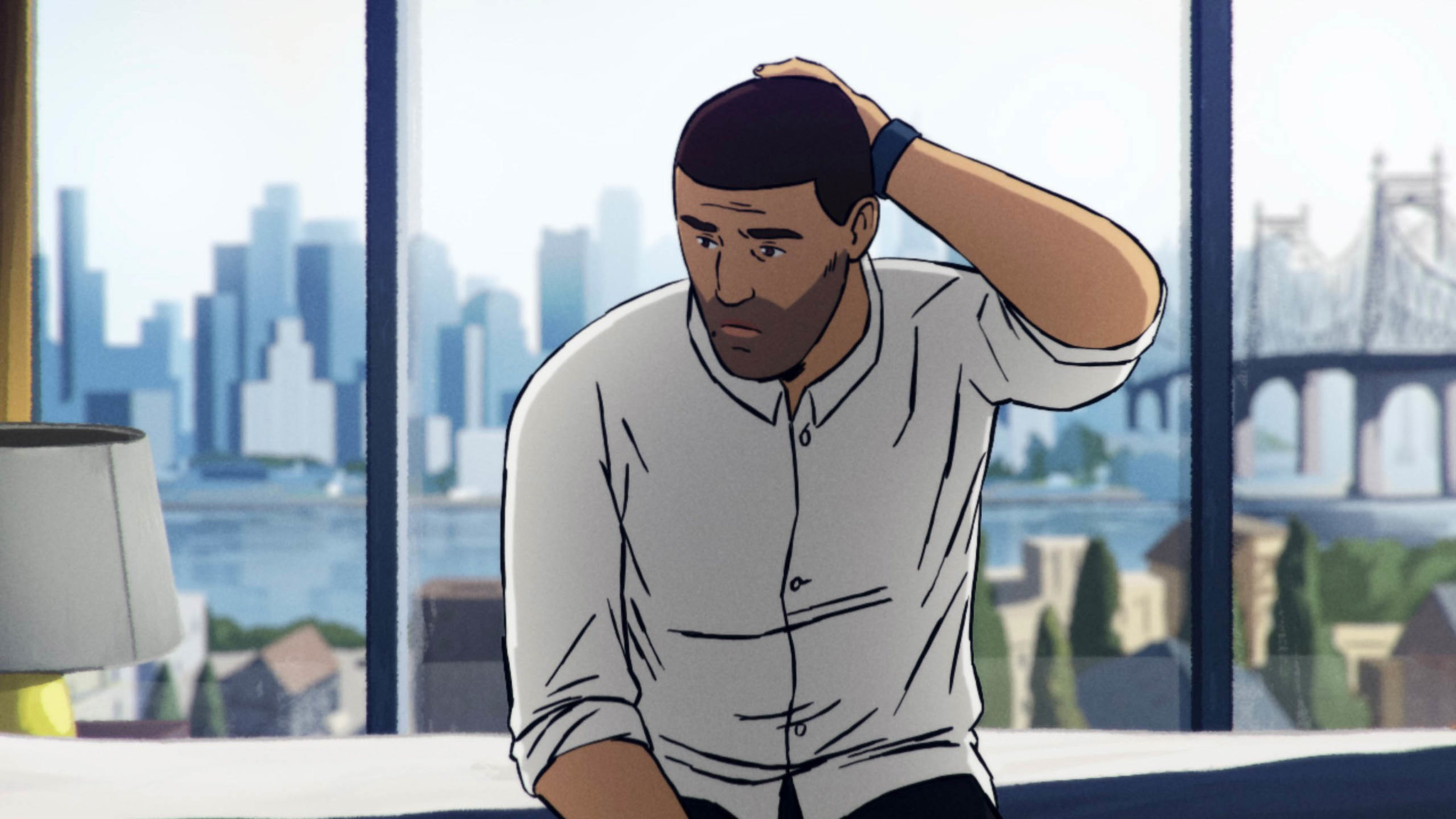 There have, of course, been a great many animated films about deeply serious subjects, many in recent years, from Persepolis to Anomalisa to Waltz With Bashir. Jonas Poher Rasmussen’s Flee can now comfortably fit on this shelf of profoundly affecting films. Indeed, this 2021 Sundance Film Festival premiere ranks as one of the most uniquely memorable animated films of the last decade. It is remarkably successful as a study of the refugee experience, as a coming-of-age drama set against a backdrop of fear and danger, and as a tribute to one individual’s ability to survive and even flourish.

Flee is the story of Amin Nawabi, a refugee from Afghanistan who arrived as a teenager seeking asylum in 1990s Denmark. Onscreen, he is always referred to simply as Amin. As an adult, he is stocky, quiet, contemplative. Soon to be married to his boyfriend, Kasper, Amin carries with him memories of great suffering, as well as the loss of his home and loved ones. In addition, Amin knows what others, including his older brother, went through to ensure that he had the opportunity to escape to Denmark and have a chance at a more normal adolescence.

Director Rasmussen knew Amin when they were teenagers; there is even a photo of the high school duo in their prom tuxedos. However, Rasmussen never knew the specifics of Amin’s past, or even his arrival in Denmark. “Have you ever told your story before?” he asks near the film’s start. Amin had not. In fact, when he wrote his story years previously, he did not tell the truth––rather, he wrote the version he was told to memorize when fleeing Russia.

So, for the first time, Amin tells all, from early childhood in Afghanistan to his eventual arrival in Europe. Minus some archival footage of Amin’s war-torn homeland, Flee tells its subject’s story through animation. This was a wise choice for many reasons. It brings Amin’s journey to vivid life, while also allowing moments of fantasy to seep into the narrative. Perhaps the most memorable of these involves a winking Jean-Claude Van Damme, from a Bloodsport poster on Amin’s wall. The animation also affords Amin a sense of safety, something he certainly deserves.

Rasmussen’s interviews with Amin move between analyst’s couch-style confessionals and much looser, friendly chats. One of the most frank and open discussions between Rasmussen and Amin occurs over a bottle of wine in the former’s apartment, after a row between Amin and Kasper. As we move deeper into Amin’s past we see moments of devastating cruelty––Russian police piling into a van to take advantage of a scared young woman, a cruise ship of startled onlookers staring down at the refugees crowding a sad boat. Yet Flee is also a film filled with humor and warmth. Amin’s journey to freedom is harrowing, but the narrative is so compelling that things never feel overly grim. Even in its darkest moments, Amin’s world is full hope and love.

As noteworthy as the script, which was cowritten by its subject and Rasmussen, and the visuals is the music. Flee features a mournful score from Uno Helmersson, while also ingeniously using A-ha’s “Take on Me” — accompanying a moment that visually references the Norwegian band’s classic animated video––and, during a sweetly romantic moment in which Amin bonds with a fellow young refugee, Roxette’s “Joyride.” And the use of Daft Punk’s soaring “Veridis Quo” during his first visit to a gay club is simply perfect. The song feels like a welcome to a new future, and the start of the rest of Amin’s life. It’s a life that, for the first time, is in his own hands.

More than deserving of its selection as Grand Jury Prize winner in Sundance’s World Cinema Documentary Competition, Flee is an extraordinary achievement. There is a poignant intimacy developed between the audience and Amin that makes his quest utterly involving. Amin’s victory—as well as Jonas Poher Rasmussen’s—is deeply felt on every level, making for a film to be savored.

Flee premiered at Sundance Film Festival and will be released by Neon.