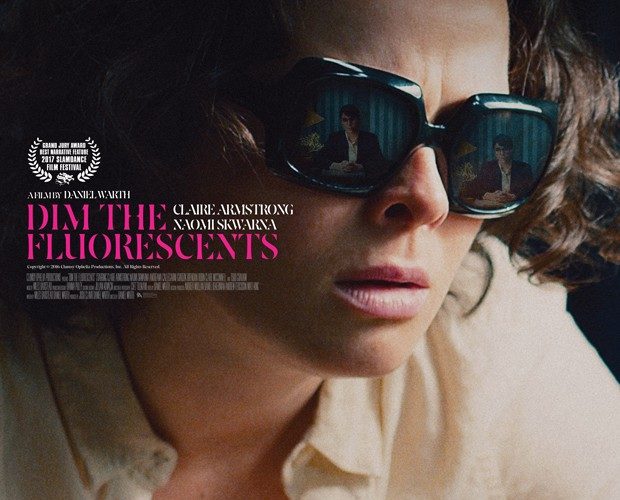 Winner of Slamdance’s Grand Jury Prize, Dim the Fluorescents is the kind of dynamic, entertaining debut feature that hopefully puts its cast and crew on the map. Taking place in the city of Toronto – which is currently going through its own indie cinema renaissance – director Daniel Warth and co-writer Miles Barstead have put together a film that crackles with energy along its lengthy, surprisingly breezy two-hour-plus runtime. It’s a film about the struggle of making a living in the creative arts that’s bursting with creativity, zig-zagging from one tone, style, or form to the next at a moment’s notice. It’s far from perfect, but the commitment from its filmmakers and two leads provide the film with a vitality that’s well worth celebrating.

It starts with Lillian (Naomi Skwarna) and Audrey (Claire Armstrong), longtime friends and roommates trying to make it in theatre. Lillian aspires to be a playwright while Audrey struggles to make a living as an actor, and the both of them can’t seem to find any work. The only opportunity that presents itself is to participate in demonstrations for corporate-training seminars, writing and acting out scenarios involving topics like how to handle unhappy customers or dealing with sexual harassment in the workplace. It’s boring stuff, but their only outlet for paid work in their respective fields, so Lillian and Audrey commit as hard as possible. Their corporate presentations turn out to be nothing more than full-blown mini-theatre pieces that vaguely relate to the parameters laid out by the people hiring them. They’re also straight-up compelling watches, the performances being both impressive in their dedication and funny in their context.

The success of these sequences, and Dim the Flourescents as a whole, is in large part due to Skwarna and Armstrong, who ground their characters amidst the hustle and bustle of the direction and writing. They play off each other naturally, bringing out their mutual anxieties and fears while revealing the small thorns in their friendship that eventually threaten to destroy it. The rift comes in the form of a new job for a large-scale corporate event, the size of which forces them to include their boss’ teenage niece, Fiona (Andreana Callegarini-Gradzik), as a favor. Despite the film’s more absurdist elements and the inherently theatrical nature of everything, its dramatic elements work because of how well Skwarna and Armstrong juggle every new direction that comes their way.

And it’s all of those different directions, courtesy of Warth and Barstead’s script, that make Dim the Fluorescents an arresting experience. With these two leads at the center, Warth directs in a way that allows his film to pick up and try on as many different things as it wants before sloughing them off and finding something else to do. There are times when one approach might not work out, such as a long party sequence that loses its footing or some subplots that fizzle out, but the unpredictability of the material means there’s always something to look forward to. Compared to the rigidity and self-imposed formal restrictions that can plague a lot of indie titles, watching Dim the Fluorescents unexpectedly bifurcate its narrative or collapse its characters’ own drama into their mini-plays with such assuredness is legitimately exciting. When we reach its blistering climax – a ten-minute shot doubling as a performance piece and resolution for Lillian and Audrey – you marvel at their performances and how well the scene works, even though you know exactly what it’s doing.

Dim the Fluorescents premiered at the Slamdance Film Festival and opens on January 12, 2018.