Slalom Review: A Nuanced, Chilling Story of Abuse on the Slopes 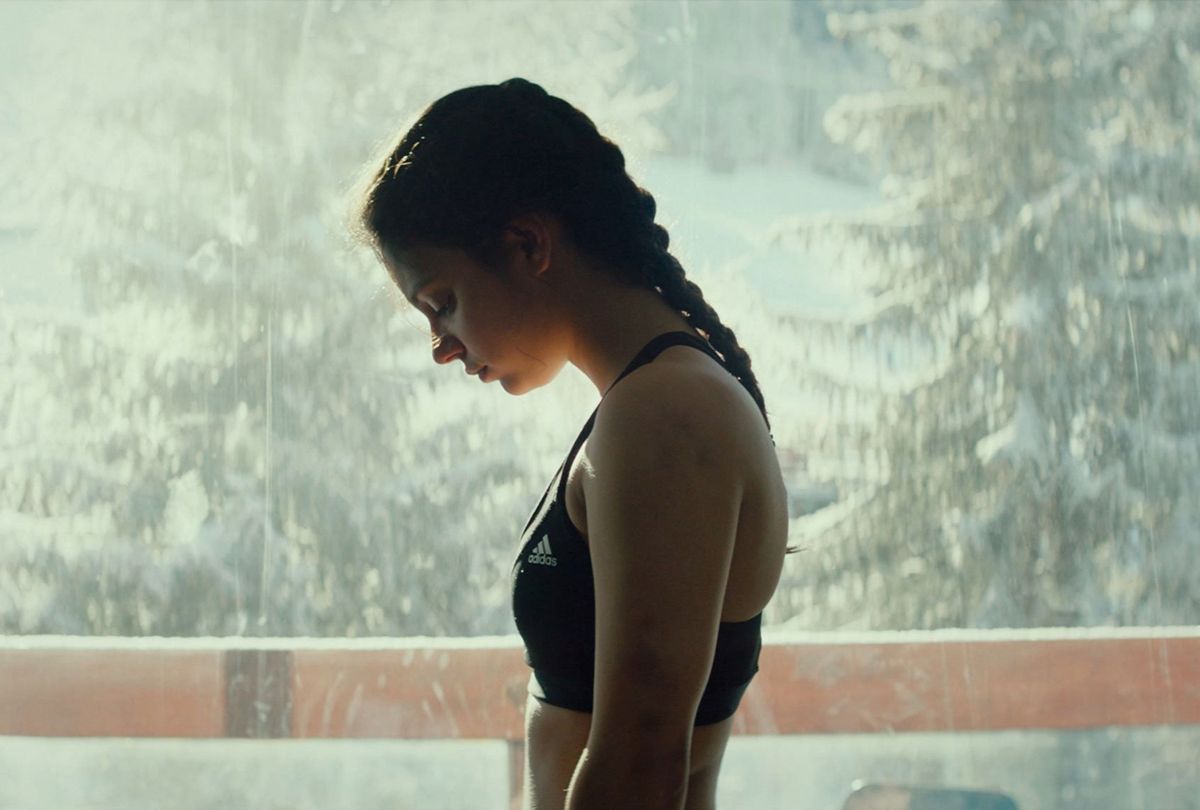 A chilling, controlled pressure cooker of a film, Charlène Favier’s Slalom brings attentive nuance to a story of psychological and sexual abuse. Set amongst the slopes of the French alps, the Cannes-selected drama centers on Lyz Lopez (Noée Abita), a 15-year-old skiing prodigy whose life is more or less controlled by her callous instructor Fred (Jérémie Renier). With his predatory advances shrouded and twisted in the mutual desire for competitive success and filtered through the young girl’s initial intrigue, Favier expertly delves into the psychological prison that soon becomes her daily existence. Far from a one-note #MeToo message movie, Slalom brings a poignant sense of restraint with fleshed-out characters for a thoroughly unnerving experience.

Clearly Fred’s favorite student, Lyz becomes ostracized by her fellow pupils in this high-stakes training program, with no one wanting to date her much less befriend her. Leaving only room in her life for skiing, it also means Fred is a constant presence as he trains her day in and day out. “He crushes you, you listen, you get better,” her fellow student says. Indeed, Fred seems to keep his sole focus on Lyz, grooming her not only to win on the slopes, but also harboring a clear infatuation that, at the outset, seems to be reciprocated more out of an adolescent naivete masked by the intense situation rather than genuine feelings. As more and more news stories emerge of the horrific sexual and mental abuse at the hands of sports instructors, Favier goes beyond the statistics and headlines, precisely breaking down the disturbingly subtle ways a professional relationship quickly becomes perverted by those in power. Fred probes with inappropriate inquiries about menstrual cycles to help Lyz achieve the ideal regiment; he improperly places his hands on Lyz in training sessions; even the excitement of winning can have romantic undertones, kissing her on the head. “You were perfect,” he says with a longing glance. While explicit abuse is eventually depicted––and is presented in rightfully appalling ways––it’s these effectively rendered moments of death by a thousand cuts that elevate Slalom from being a more formulaic drama.

Following an astounding breakthrough performance in Philippe Lesage’s coming-of-age drama Genèse, Abita is in familiar yet greatly expanded territory here occupying virtually every frame of the film. Given the room to breathe and react to the unfurling abuse, Abita exquisitely conveys a world of distress in momentary glances and muted actions. With the role requiring a great deal of physicality, Favier extends complete trust to her lead, capturing the grueling training and methodical manipulation while never losing sight of perceptible humanity. Renier is also perfectly cast, with his naturally effervescent charm providing an introductory façade that shatters as his sinister intentions bubble up under the surface. The film falters slightly with its subplots, featuring Lyz’s strained relationships with her parents and her sole friend Justine (Maïra Schmitt). The unsettling dynamic between Lyz and Fred is so well-captured that these additional threads end up having an unsatisfying, perfunctory feeling.

Yann Maritaud’s crisp cinematography impresses, especially as Abita’s supposed freedom becomes further constricted. An evocative shot of a stopped ski lift in the night halfway up the mountain, occupied only by Lyz and Fred, brings as much uneasiness as a striking moment later in the film with Lyz eerily confined to her bedroom, peering out from the shadows at an outburst between Fred and his partner Lilou (Marie Denarnaud). Given the title, one also expects riveting skiing sequences and Maritaud doesn’t disappoint, with his camera viscerally propelling down the mountain, side by side with Lyz, as Low Entertainment’s electronic score builds momentum.

Marking Favier’s debut feature after a medium-length documentary and a handful of shorts, Slalom is one of the most confident first features of the year thus far. Early in the journey, Lyz proclaims how she wants to “make it to the top.” By the film’s end––left fittingly unresolved as there’s no easy, quick repercussion for the abuse on display––it’s understandable why she may want to give it all up. Slalom ultimately becomes a story about seeing one’s passion in life corrupted through the twisted, pre-meditated manipulation of a mentor. It’s enraging and crushing in equal measure.