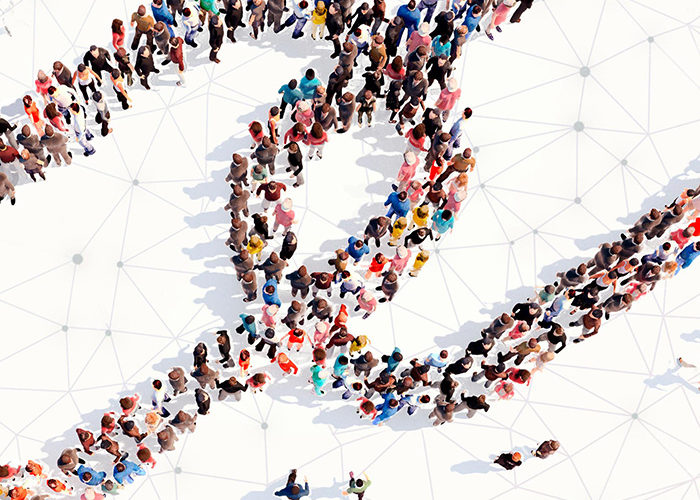 Review: ‘Trust Machine: The Story of Blockchain’ Looks at the Infinite Possibilities of a Technology Disruptor

Documentarian Alex Winter is solidifying his place within the tech world as a storyteller willing to look at modern systems stymying the old guard and exciting the new before helping to disseminate what they mean for the world at-large. He looked back at how Napster disrupted the music scene in Downloaded (something the movie and television industry faces today to the point where a sequel in the next five to ten years wouldn’t be far-fetched) and took us beneath the surface of buzzwords and indictments surrounding Tor and the dark web with Deep Web. Much like the latter’s central through line Ross Ulbricht, Winter’s latest Trust Machine: The Story of Blockchain focuses on educating outsiders by humanizing a disruptor targeted by those working to maintain status quo.

He goes one further this time too by using his subject — blockchain technology — as the source of his art. The film was funded and is being distributed by a “blockchain entertainment studio” in SingularDTV. It uses this ground-breaking system as a means to play outside the usual avenues and thus become unbeholden to anyone not centrally involved in its making. That sort of thinking allows Winter to not have to worry about government interests or financially obliged insight. It lets him go where the story takes him and talk to those willing to go on the record and rebuke the efforts of mainstream media types treating the technology as a punch-line much like (as the film reveals) those same types of “experts” dismissed Amazon. Like the title states, success relies on trust. That is the basis behind its creation. Rather than rely on one source of authority that’s by definition corruptible within a capitalistic society motivated by profits and power, blockchain makes it so information is stored on an ever-growing number of systems in an ever-growing number of places until removing one piece leaves the whole intact. Invented in 2008 by Satoshi Nakamoto (a possible pseudonym), it was overshadowed by the platform he created upon its back: Bitcoin. Winter’s interviewees (and Rosario Dawson’s narration) provide a cursory look at what went into creating that crypto-currency (and its copycats) with a goal much larger than understanding, though. This is less a film about how we got to the current state of its proliferation and more about the infinite possibilities it holds.

So the aforementioned through line (Lauri Love facing extradition to the United States for a hacktivist protest despite never setting foot in America) isn’t as integral to Trust Machine as Ulbricht was to Deep Web. Love also isn’t as controversial a figure since he didn’t start an electronic storefront capable of providing criminals access to drugs, weapons, and humans. He’s instead a casualty of oppression. Just as the US government sought to destroy Aaron Swartz for crossing into an ambiguous law’s murky waters (he hung himself as a result), it looks to throw Love in jail for ninety-nine years without ever presenting evidence proving he did what he did. The US is asserting its dominance by punishing pranksters in the hopes its force detracts others from trying worse. Love is therefore a kindred spirit: someone willing to fight against centralization and in-turn a high profile example of what could happen if you do. Winter shows how early blockchain adopters are facing myriad forms of blowback whether China’s hardline stance against the entire system, how Bitcoin has empowered citizens of Venezuela to increase their economic worth only to then watch a government crackdown, or nations like Estonia actually jumping on the bandwagon to create their own crypto-currencies. While it’s been a decade since Nakamoto unleashed his creation upon the world, we’re still in its infancy as people are just now seeing its potential to reinvent identification, banking, and privacy with less risk than current infrastructure supplies. The biggest detractors are unsurprisingly those with the most to lose.

While the film is inherently positioned as a blockchain proponent due to its choice of experts, Winter doesn’t necessarily take a hardline stance. He talks to those in the game who agree that its current implementation is a bubble in the midst of a pop. They simply aren’t willing to dismiss the benefits being created along the way or the realization that this is a bubble with a real possibility of evening out in the near future. So while regular people like me should look at the industry’s volatility with fear as far as blindly joining in, we should also make a conscious effort to seek out more information. Winter has become a master at coaxing this awareness to the surface of our thought process through his films. He’s not out here giving a lecture that a majority of viewers won’t comprehend because he knows that’s the easiest way to lose them. He also isn’t merely preaching to the choir. Winter lies somewhere in-between with an agenda to shed light on real world applications in order to pique interest, demystify, and cut through the bullshit spouted by talking heads on television that use sarcasm because they don’t fully understand the subject themselves. We see how musicians like Imogen Heap and Gramatik embrace blockchain for charitable pursuits and artistic autonomy respectively. We see innovators feeding impoverished nations, supplying communally produced green energy, and even trying to remove internet providers from the equation with a self-maintained mesh network. The possibilities are infinite and have arrived with perfect timing.

Look at what’s become of the United States thanks to organizations like Facebook and Twitter turning individuals into weaponized products. Look at third world countries where totalitarian leaders can literally shut-off communication through online means in order to curtail a revolution aimed squarely at their throne. As someone in the film states, we’re living a global existence that’s arrived faster than we’ve been able to process and all the old ways that worked on a smaller-scale nationalistic basis cannot handle the massive transition. Those middlemen who are afraid of being cutout of tried-and-true systems thanks to their being proven obsolete will do everything in their power to prolong the inevitable. Eventually, however, the future will come. While present volatility could spell blockchain’s demise, it’s more likely growing pains.

Trust Machine: The Story of Blockchain is now in limited release in NYC and hits Los Angeles on November 16.