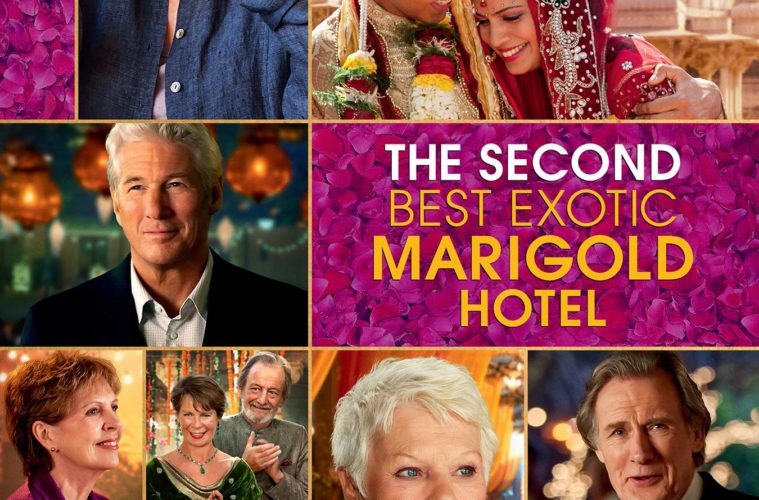 An unexpected franchise (both the hotel and the film), The Second Best Exotic Marigold Hotel is essentially a gentle sitcom. It’s a form of comfort food that delights even if it lacks surprises. Reuniting the gang from the first picture, we check back in with the pensioners on holiday; many now hold jobs in India, including Bill Nighy as Douglas, a tour guide whose script is read to him from a boy he’s hired. Despite the genial tone, the comedic pay-off never quite plays out beyond a few chuckles. Judi Dench returns as Evelyn, who is formally hired to source quality fabrics for a British fashion brand impressed with her experience, and she points out to her younger boss that she’s 72. Also back is Maggie Smith as Muriel who helps the hotel’s young proprietor Sonny (Dev Patel) run the place. Looking to expand the franchise (how reflexive!) the film opens in California as he goes in search for international financing. Sonny was in over his head in the first picture, but here he’s confidently growing his brand with his eye set on a new project. Also on his mind is his marriage to the Sunaina (Tina Desai), a relationship that could use some more depth. Filling a niche that’s missing in cinema — the lack of senior-driven comedies at the box office — The Second Best Exotic Marigold Hotel is a nice way to spend a Saturday night at the movies in spite of its flaws. Sequels to comedies can be difficult: some try radical reinvention (The Hangover 3, for instance, grew much darker) while the better films spend time deepening character development (Dr. Doolittle 2 is a rare success). Taking a formula that worked in the first and not tweaking it can be deadly (see the painful The Hangover 2 and the bland Hot Tub Time Machine 2), while here it sort of works. Maybe this is the wrong form for this picture: a colorful half-hour sitcom based on the inhabitance of the Best Exotic Marigold Hotel seems like a more appropriate venue for these adventures.

The message at the core of the film is welcome: it’s never too late to reinvent yourself. Through gentle romps and new co-stars like potential double agent Guy Chambers (Richard Gere), who falls for Sonny’s mother (Lillete Dubey) and a few misadventures, the film is overly long despite its beautiful, bright cinematography and likable performances. Ol Parker’s screenplay never quite ups the stakes and goes the extra mile, yet it works because it’s so damn light and likable. For fans of the first picture it offers more of the same: an exotic getaway the remains true to its original spirit, which is more than I can say for many uninspired comedy sequels that have run out of gas. Thriving from the character investments of its first outing, it remains rich even if it’s more of the same.