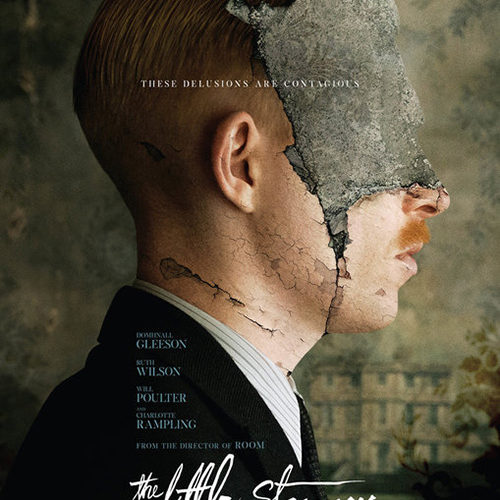 One should suspect something’s off the second Domhnall Gleeson’s mustache appears. It’s the kind of too-long-and-groomed-not-to-be-suspicious facial hair that became the staple of silent movie villains who casually twirled it as they waited for trains to put damsels in serious distress. The issue with Lenny Abrahamson’s The Little Stranger is that we’re not supposed to “get it.” Rather, we’re supposed to disregard everything we know about movie codes and let the moody, forced Gothic-ness of the film lure us into its mystery. And anyone who’s seen a film of its type before is likely to unlock the central puzzle in no time, making the rest of the movie a truly laborious experience.

Gleeson plays the quiet Dr. Faraday, a small-town physician called to see a patient at Hundreds Hall, the once opulent manor owned by the Ayres family, where his mother worked as a maid decades before. Believing it to be a homecoming of sorts, Faraday is thrilled, but unsurprised, when he’s asked to dinner by the family members. As someone extremely conscious of his class, he sees this opportunity as the perfect occasion to prove himself, and the people around him, that he’s just as good as any aristocrat.

What Faraday fails to see is that the strata that formed British society before WWII have shifted in many ways, and the house he remembers so fondly has become just that: a memory. As shot by DP Ole Bratt Birkeland, it already looks like a parody of itself, faded wallpaper, dusty mantels, greying lace, and decay, Grey Gardens by way of Downton Abbey. So when Faraday becomes obsessed with the idea of seducing Caroline Ayres (Ruth Wilson) and becoming lord of the house, we can’t help but wonder: why is he going through so much trouble? Are we also supposed to pretend we don’t see the house precisely for what it is?

So begins Abrahamson’s mission of gaslighting us as we witness a story of gaslighting. Things begin to go wrong for the Ayres, matriarch Angela (Charlotte Rampling) suspects the house is being haunted by the ghost of her late daughter, while son Roddy (Will Poulter) is suffering from severe PTSD. While Faraday is able to rescue them throughout, we know Faraday is facing his own demons, which creates a sense of disconnect as we know we can’t even rely on the unreliable narrator. But as the film dives deeper into its own game, we are left wondering exactly what is being accomplished.

It fails as an insightful look at the class system in England because it sees every party with utmost contempt. The poor in The Little Stranger are as despicable as the wealthy, and probably even more so, because there’s an added moral lens suggesting the poor “should know better.” It fails as a genre exercise because it also sees genre tropes as insufficient; Abrahamson doesn’t let the mystery simmer enough before trying to pull the rug from underneath us, and he doesn’t find any pleasure in the camp of Gothic horror the way filmmakers like Alejandro Amenábar and J.A. Bayona have in modern classics like The Others and The Orphanage.

It’s also unpleasant to watch given how perversely the female characters are treated. If Faraday is a misogynist, one would hope the film would at least allow the female characters some dignity. Instead, we see them undergo such terrible physical and psychological torture one wonders if Abrahamson, following Room, is working on a series of films about men who want to keep women trapped in houses against their will.

What this means for the audience is that we’re left with an adequate piece of filmmaking that refuses to grant us any kind of pleasure, be it aesthetic, emotional, or intellectual. Abrahamson doesn’t go deep enough into the characters so that we ever see them as something other than pawns in a plot, and we’re even denied the opportunity to try and indulge in it as camp because the movie screams, or judgmentally whispers, “prestige adaptation.” The film is as lacking in pleasures as its central character, which might be the only explanation as to why Abrahamson was interested in turning Sarah Waters’ novel into a movie. Is The Little Stranger a film about anhedonia? Now that’s a mystery worth looking into.