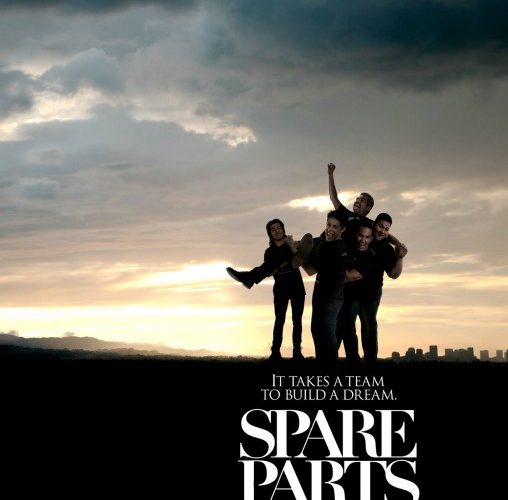 Tucked away in a screen at your local multiplex you’ll find another feature film, all be it not an Oscar prestige drama, tackling another contemporary issue head-on, and like Selma, it may be another paradigm shifter. Spare Parts, while not an entirely original sports movie, is a minor triumph following a group of Latino students and their advisor from impoverished high school to the U.S. Underwater Robotics Competition. What is unexpected is how genuine screenwriter Elissa Matsueda and director Sean McNamara (who is not known for subtly in his films 3 Ninjas: High Noon at Mega Mountain and Soul Surfer) effectively tackle a few Obama era policies from the “Dreamers” to good ol’ American competitiveness. When the undocumented Latino students of Phoenix, Arizona’s Carl Hayden Community High School taken on ivy league education brands such as MIT, Duke, Stanford and Cornell with good old-fashioned ingenuity for a fraction of the budget of what the big guys spend on high tech toys, you’ll want to stand up and cheer.

Spare Parts, although cobbled together from parts of better (and worse) pictures embraces a few tropes here and there while avoiding the complete sentimentality you’d find in a picture with a single agenda, despite the occasional run-in with I.C.E. A rare sports movie where the sport is engineering, the film is careful to not open the pandora’s box of rhetoric its Arizona setting might suggest. It does not contain even a single cameo by Governor Jan Brewer or local Sheriff Joe Arpaio, whose policies on the subject are kept off-screen, I suppose as a way of blaming the system, not individuals who would aim to tighten the noose. Granted, within its PG-13 rating, the film tackles the effects of poverty including violence. It’s above-all a feel-good sports movie with a little more ambition.

George Lopez stars as Fredi Cameron, an out-of-work engineer bouncing around from position to position. He finally accepts a substitute science teach position at Hayden with the responsibilities of supervising the engineering club. Marisa Tomei plays Gwen, a computer science instructor who gracefully deals with the school’s shortage of resources, while Jamie Lee Curtis plays the well-meaning, if not somewhat aloof principal. While these relationships play out as you may expect (with Tomei jumping into the role of a quasi-love interest that distracts from the A-story).

The star of the film is Oscar Vazquez (Carlos PenaVega), a real-life dreamer who is caught between two cultures; undocumented, he aspires to be an all-American with dreams of joining the army. Not only is he told “no,” but due to his application he’s put on an I.C.E. watch list that forces him to lay low. The team dynamics explore, rather interestingly the dual identity of kids brought to the U.S. illegally, as well as the consequences of protecting the undocumented members of one’s family. Lorenzo (Jose Julian), another team mate, is often the fall guy for his brother until he refuses to be, a known fact amongst the faculty at Hayden. Lorenzo’s father (Ray Aguayo) avoids the issue until Fredi calls an impromptu Tequila summit to address the issue directly with him.

While Spare Parts contains all the familiar sports movie tropes, it’s rare to see a film do so with a tender sincerity and investment in each of these characters, all caught in their own bind. Once the film reaches the inevitable big game, I was invested and interested in their logic, passion and ingenuity. Within the genre, these pictures often contain adversity and challenge off the field; here the geopolitical and cultural challenges are made all the more intense while the filmmakers rightfully approach each character with a unique voice — sure, they occasionally let you know their plight but more often than not they’re humble, hardworking and focused on engineering. Inspiring for kids of any age and background, Spare Parts is an effective, family-friendly film with a message that provides a valuable introduction to the issues surrounding immigration reform for the next generation of voters.