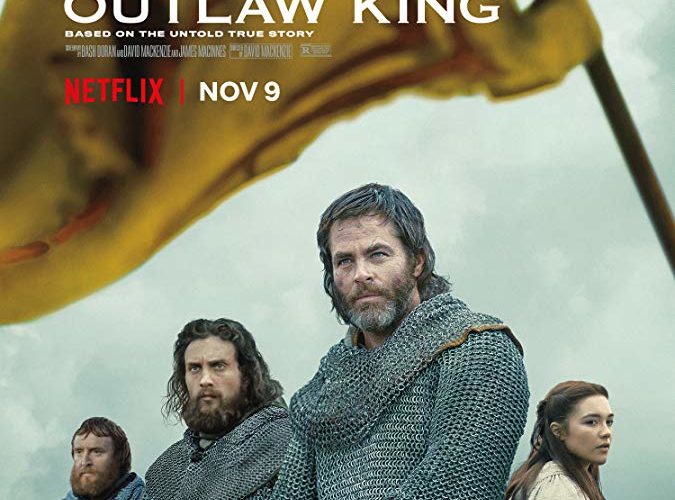 Many know the tale of William Wallace, the Scottish knight who was a prominent leader in the First War of Scottish Independence, as portrayed by Mel Gibson in a wee film called Braveheart. Now, picture Wallace’s severed head hung from a monument in the town square. This is the atmosphere of Outlaw King, an epic set against the backdrop of a crippled Scotland itching for justice. Positioned as a long-gestating passion project for Scotsman helmer David Mackenzie (Starred Up, Hell or High Water), Outlaw King is a sincere war picture with ferocious violence and an inconsistent but righteously beating heart.

It’s 1304. King Edward I of England proclaims himself as Lord Paramount of Scotland, and Scottish nobility across the land are drawn into a reluctant agreement to pay taxes and kneel to a King crowned through coercion and war. Prominent among these taxed families is Robert the Bruce (Chris Pine), who is soon compelled into disobeying his father’s sworn allegiance to Edward in the name of Scottish freedom. The film’s title is fashioned Outlaw / King, which is exactly what Robert the Bruce becomes: an outlaw to the invading English, and a king to those Scotsman who follow him to free their homeland.

Indeed, the film may not be doing anything new, but it goes for it with candor and some panache. Outlaw King opens with a swirling long-take that establishes its political machinations, as well as its tactile nature. At times, it plays out like theater, with Mackenzie adjusting the plotting from haughty epic poem to intimate drama with irregular but rousing results. After its engrossing opening shot, Outlaw King moves into a parlor room period piece, then develops a staccato rhythm of brutal violence and melodrama; a simultaneous prelude to war and quaking battle cry that builds the film quietly and yet relentlessly to its climax.

This climax is staggering, and despite the film’s jagged tonalities, ultimately earned. The battle bounces between fluid motion and montage to create sheer visceral affect, with tattoos of mud on men’s faces and the resounding weight of death left in its wake. Before this finale, Outlaw King has displayed an assortment of frenzied violence to compliment its candlelit musings and scenic vistas. A mid-film highlight is a lakeside ambush, which is superbly cut to mirror the sensation of confused panic, as well as an earlier moment of tension staged around a vanguard of armed rogues that beautifully encapsulates the film’s unstable atmosphere.

Outlaw King was infamously cut rather heavily after its initial premiere as the Opening Night film of TIFF, and while it may have sacrificed some of its textures, it still manages to leave room for rumination. Despite his intense focus on bloodshed, Mackenzie never celebrates the act. There is contemplation behind the mandated slaughter, with a wavering (and at its end, rather heartbreaking) gaze on the dead, even if all it amounts to is the simple truth of every reward coming at a price, though there is something here too about the horrors of tyrannical conquest and invasion.

This rumination stretches beyond the violence to the film’s aforementioned pacing, which allows for highlights on performance and flourishes of its immaculate score, even as it creates an often uneven patchwork. Pine leans into his quiet side, often choosing contemplation over cheeky charisma. His counterpoint is Florence Pugh, who handles every beat with emotional dexterity. Pugh’s eyes demand agency, even while Outlaw King’s screenplay does not quite undermine the pigeonholed roles of women in so many war epics.

Amidst the mud and blood, Mackenzie’ directorial chops cut through. To frame the juxtaposition of honorable acts and sadistic subjugation, Mackenzie employs foreground and background counterpoints, as well as crosscutting. These elements are first used separately, then melded. For their battle speeches, Mackenzie positions Robert the Bruce toward the camera, his frame obscured by the bodies of his men who are closer to the lens. He is a man of the people, honest in how he bares himself to us and generous in how he shares his space with those he fights alongside. As a stark contrast, Edward’s son (a maniacal Billy Howle) gives his speech with his back to the camera, delivering his ravings to an army relegated to the background to demonstrate his sadistic motivations.

Before the somber realities of war set in, Mackenzie pulls out zooms to show the donning of metaphorical masks of bravery, and gives as much screen time to a man hung and gutted as he does a couple making love. It’s all messy beauty, with a rainbow motif scattered amidst chainmail fists and elegiac emotional affect. Outlaw King is a big bruised bloody bastard, equal parts disordered and lyrical, tender and viscous. As proof, Mackenzie cuts his film like his king muses of battle: no more chivalry, now we fight like wolves.